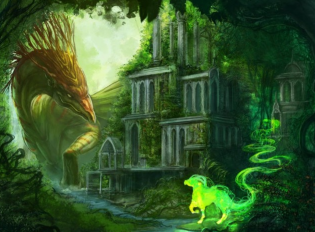 Design Goals: This card is the big bomb of the Absynthia group of cards, and the first we'll preview.   Absinthe is a green liquor purported to cause hallucinations and insanity, rumored to be a favorite among crazy artsy types like Van Gogh, Oscar Wilde and Ernest Hemmingway.  The Absynthia cards are a cross between the Hidden Guerillas cycle and the Thassa, God of the Sea cycle.  Though this particular card doesn't have a static ability like the Theros block Gods do, some others will.

This hallucination becomes a reality after your opponent has consumed at least 7 drinks in a single turn.  If that turn happens to be your turn, then it can attack (as long as it hasn't got summoning sickness).   We wanted to force heavy devotion to green because the Absynthia cards are all very synergistic (as you will see in future previews); someone who drafts this with their first pick will commit to green almost automatically, and be heavily rewarded for sticking with it.

Most of the Absynthia cards revolve around a combination of drinking and discarding cards (which, in Magic, is analogous to going mad).  In this case, once you unleash the dragon, you go almost completely insane.  We originally thought about making the ability empty the opponent's entire hand, but that was deemed too powerful.  Another card from this same theme, which I'll preview soon, gets a nice little buff each time an opponent discards a card.  Others have the same "drink" trigger at lower (or higher!) numbers.

This sub-theme has proven to be one of the most challenging to design, since it adds an entirely new consequence for drinking. Balancing this has been difficult to say the least.  Of all the cards previewed so far, this is the one that I believe will take the most revisions before the set is finalized.