Arbitrage: the practice of taking advantage of a price difference between two or more markets.

Trader Tools is a convenient platform when looking to unload magic cards to dealers, or for figuring out how much to spend on your next speculative purchase. Convenience has a price though: an incomplete or misleading picture. Older players will remember Arabian Nights for its light/dark common card variants. Trader Tools is presently unable to discriminate between these light and dark variants, leaving the savvy buyer with a great opportunity to take advantage.

I stumbled across a card seller I will refer to as "Store A" when looking for deals on a pet card of mine that recently spiked.

While shopping TCGplayer I noticed one merchant had multiple copies at $3.99. The only thing a buyer might be turned off to was the high shipping cost. I decided to just do a quick Google search of Store A's name, hoping I would find the seller's site and reduced shipping cost. This seller does have their own site and while I was disappointed that reduced shipping wasn't available, I found many more mispriced Arabian Nights cards available for purchase. Excited by my find, I opened up the buylist page of my favorite dealer, "Store B", and compared prices. Here is where I ended up: 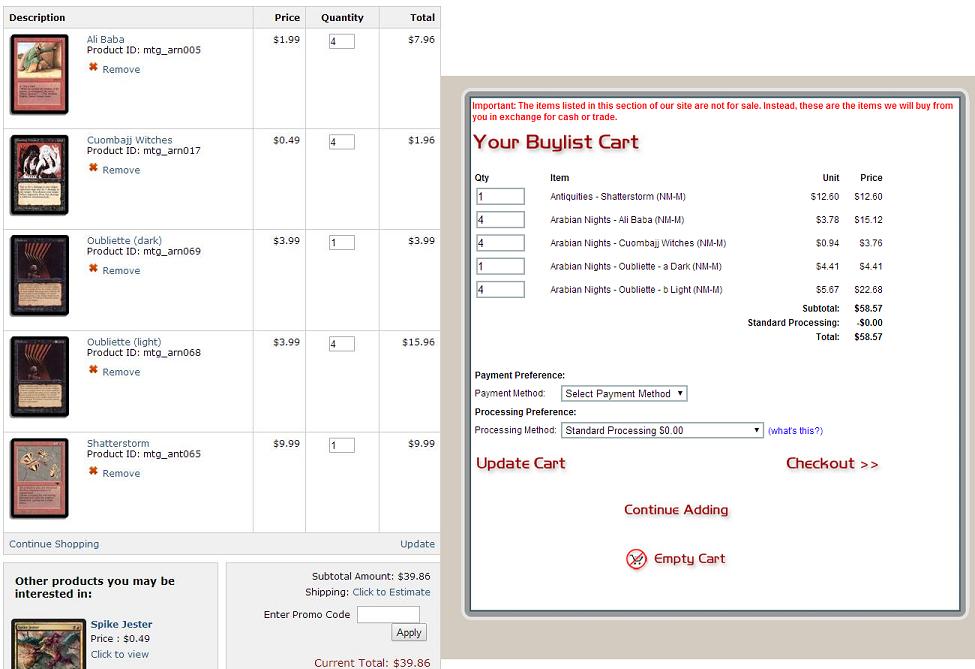 After adding $2.99 for shipping, I could buy those cards at a 27% discount to buylist pricing from Store B. I was so happy with the initial Arabian Nights finds that I did a quick check of Store A's other Antiquities singles. Only Shatterstorm presented similar pricing. That guided me to the conclusion that the value I was realizing in one set was due to the inconsistent way people account for the light/dark cards in Arabian Nights.

After a quick search of the QS forums, I found reseller reviews for Store A that were generally positive. I also realized the owner of the store was a member. I decided to go ahead and place an order with them for 8 copies of Oubliette, four dark and four light. Once they arrived (quickly and in pristine condition) I decided to check the site to see if pricing had been updated. Not yet!

What We Can Learn From This

Thinking about how to uncover similar opportunities when hunting TCGplayer has lead me to the following trinity: mispriced, abundant, and buried. Cheap cards on TCGplayer are often buried under more expensive cards thanks to the default sorting of price+shipping the website uses. When this "cheap" card is a one-of, it rarely makes sense for a buyer to consider purchase. But more often than not these cheap cards are offered in multiples by a seller. That abundant supply makes for opportunity.

Even if a card is seemingly rendered no longer cheap thanks to high shipping and doesn't come in multiples, taking the time to search both that seller's name on Google and store on TCGplayer is worthwhile. Many sellers are still using TCGplayer to guide traffic to their own website. A seller's personal website often offers reduced/scale-able shipping and a much more searchable card database. If a seller doesn't have a website, they likely price what they've listed on TCGplayer similarly across the board. That means eating shipping once to buy different cards can be just as profitable as finding many copies of a single card at a cheap price.

Strategy in Our Brave New World

When a card spikes, new sellers move in. You can still find arbitrage opportunities when this happens simply by changing price sorting so it excludes shipping. You should feel comfortable buying cards at or below buylist given the incredible growth of this game. If Magic continues to grow for the next five years as it did in 2013, demand alone would account for a 200% increase in card prices from 2013. In the real world that means that while Modern pricing looks completely unsustainable, it would only take two years of similar growth to explain the doubling of card prices in such a short period. In other words, demand is increasing to justify these prices. While many fear reprints, Mutavault, Dark Confidant and Tarmogoyf suggest to me that reprints are more likely to increase demand. As players get a hold in format staples, their desire to play in those formats will support prices.

3 thoughts on “Insider: Finding the Next Arbitrage Play – Gaps in the System”