Writer’s Note: This article contains some exaggeration. While I personally find enjoyment out of the suggestions presented below, it may not be a fit for everybody. Please keep this in mind as you read through my arguments. For those who sense resonation with this article, I’d be eager to hear your comments about why, below. To everyone else – thanks for keeping an open mind! – Sig

Can this actually be a thing in EDH? There are a handful of cards in Journey Into Nyx that have decent abilities, but their abilities only trigger when they become untapped. The most logical way to get a creature to untap is to attack with it the turn before. The problem is these creatures are all fairly weak and fragile, and since they have converted mana costs above one, I don’t see them attacking a whole lot into an opponent’s force.

Last week QS’s David Schumann wrote a terrific article summarizing various “penny stocks” of the MTG finance world worth keeping your eye on. I personally think a new card could be added to the list: Koskun Falls.

Koskun Falls provides a feasible way to ensure your King Macar, the Gold-Cursed untaps every turn. The card is black and could fit well into an EDH deck with the King. It may not work well with something like Daring Thief but I certainly believe this could be a thing in the right build.

I’ll admit this is a stretch, but to be fair there are other believers. Look at the uptick in Koskun Falls’ price since Journey Into Nyx was fully spoiled. 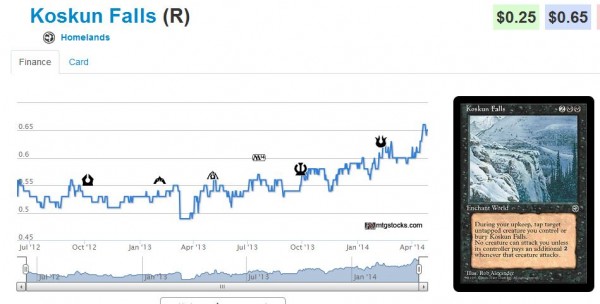 The card isn’t worthless to dealers, either. Check out Trader Tools: 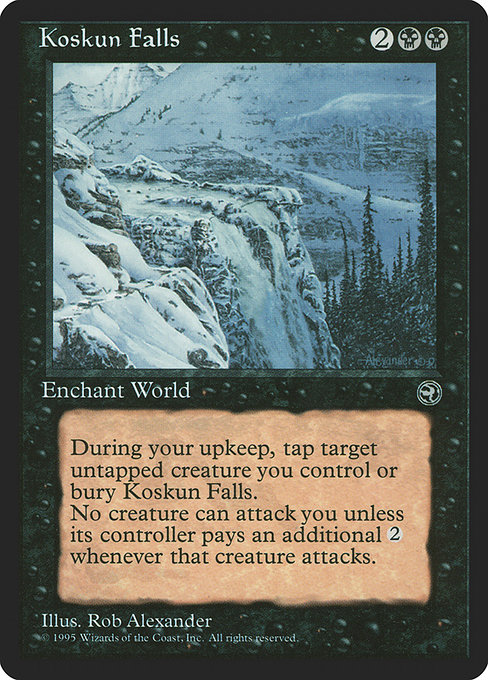 Speculating on Homelands Cards?! No Way!

Way. This forgotten, oft-detested set has surprised speculators again and again. Long gone are the days when Baron Sengir was playable, yet the iconic legend buylists for $1.75 to mythicmtg. Don’t ask me why. I couldn’t tell you who wants this card. 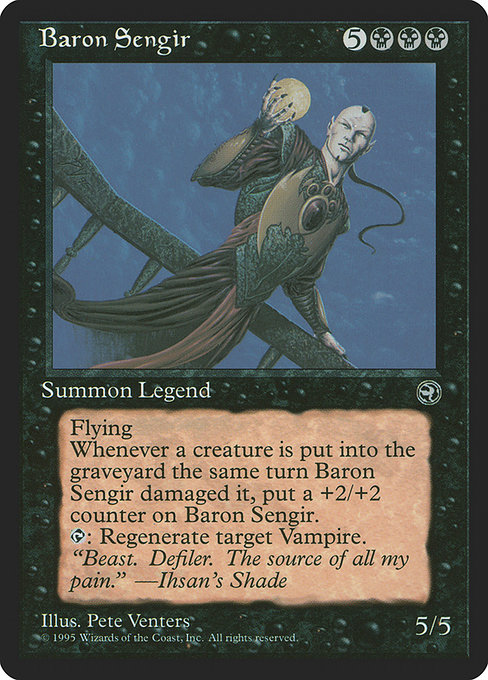 I can, however, tell you who wants your Autumn Willows. Apparently a person bought hundreds of these to create an instant (yet inexplicable) collection. Whatever floats his boat, right?

Speaking of floating, this buyout has kept Autumn Willow’s price far above bulk even now a couple weeks after the initial spike. TCG Low is $2.24 and SCG is actually selling this card at $4.99! Laughable? Not as laughable as their buy price of $2! 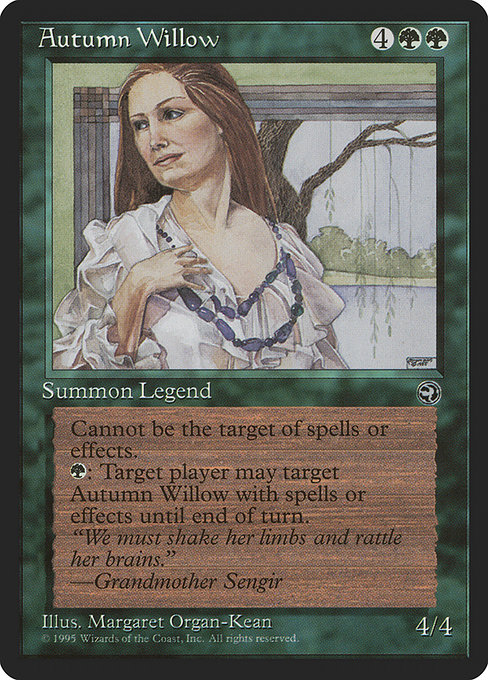 And let’s not forget about the first ridiculous Homelands spike in the MTG Speculation era:

Didgeridoo is the most valuable card in *cough*….the most valu-…oh my gosh. I can’t believe I’m going to write this without being completely sarcastic.

Didgeridoo is the most valuable card in Homelands! There, I said it! The artifact is actually worth over $5 and it can be sold to dealer(s) for over $2 if Near Mint. Some were very circumspect about this card and there is no way I can blame them. But if you thought this was a baseless buyout, I’d ask you to reconsider now that we are nearly a year later and the card still has kept the majority of its value.

This is the new face of Magic, folks. Silly tribal cards that people want to enjoy in casual play can have value. Just like I think Koskun Falls should have value.

But we need to go even further back in Magic’s history in order to find the first true buyout from Homelands. In fact, we need to turn the clocks back all the way to Fall 2010 when Scars of Mirrodin was spoiled. An important keyword was revealed during spoiler season that got the attention of MTG speculators: infect.

Want to know what Homelands card is great at stopping infect strategies? 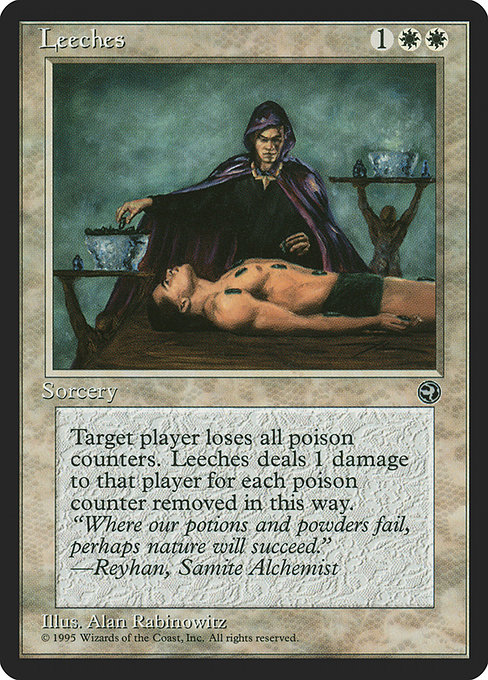 Who remembers this one? I remember walking into my LGS sometime during Scars of Mirrodin block seeing finance-minded individuals rifling through the LGS’s Homelands box looking for this card. While I’ve never actually seen the card cast, it was a thing. In fact it still kind of is. Why else would it be $2 at TCG Mid and retailing for $1.49?

Amazing Flavor for a Small Price

How many sets in Magic’s history can be purchased for less than $50? Probably not many, although I’d wager Fallen Empires and Ice Age would probably be close. What I love about Homelands is not just the price and the random buyouts, but also the flavor of the set.

Let’s face it–Magic Cards just aren’t what they used to be. Nineteen-year-old sets have so much more flavor than newer sets (although Innistrad was a homerun). For those who have nostalgia for old-school Magic, this set will surely take you back.

I have to remind myself that this is a financial column and not a column for reminiscence. No one is going to make thousands of dollars speculating on Homelands sets. But there is money to be made here. Cards like Didgeridoo and Autumn Willow prove that flavor and nostalgia can carry some weight. The fact that Baron Sengir is still worth a couple bucks indicates the same.

There’s one more thing I haven’t mentioned yet, which is further evidence to suggest that picking up a set of Homelands isn’t the absolute worst. Every card I mentioned in this article is on the Reserved List!

That’s right! Autumn Willow, Baron Sengir, Koskun Falls, Leeches and Didgeridoo are all cards that Wizards of the Coast has promised never to print again. In fact there are 35 Homelands cards on the Reserved List in total–a significant fraction of the set as a whole.

I’ll admit this article is far-fetched. But over the last year or so I’ve seen people joke about speculation on Homelands cards only to see cards actually jump in price. Buylists on some of these cards are surprisingly high, probably due to how difficult it is to actually find them.

Will a Homelands set appreciate in value more rapidly than a Revised Plateau in the coming months? Probably not. I can’t make an argument for speculating on Homelands sets at all. It’s probably a terrible idea. But I keep thinking back to the age and flavor of the set. 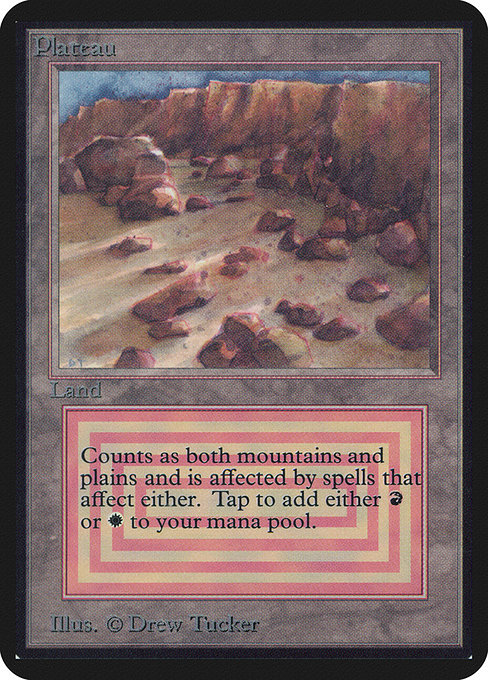 The same goes for sets like Fallen Empires and Ice Age. They are such flavorful sets, and as they age further and further they are becoming difficult to find locally. Even a set like Weatherlight had some tremendous flavor, and while it’s a bit more expensive I’d argue this one is also worth a look.

I feel $80 is a fair price for a collection of fun cards with some Constructed relevance. Winding Canyons is on the Reserved List and Gemstone Mine is played in Legacy and Modern. Null Rod and Doomsday have also seen play in the past and are financially relevant.

My Final Argument – A Stretching Comparison

Age alone isn’t why cards from these older, flavorful sets are harder to find. Being from such old sets also means their print runs will have been significantly lower than sets of today. Fortunately for sets this old, finite print run information actually exists! 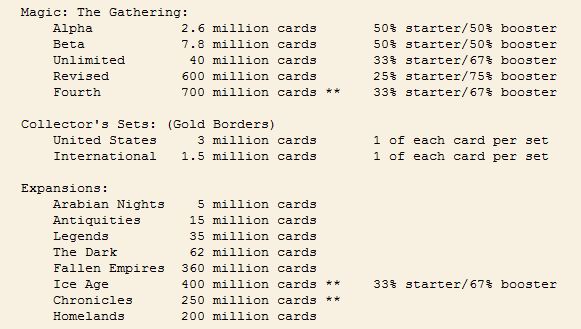 Sure, the numbers seem high for Homelands relative to the first few expansion sets. There are roughtly twenty times as many Homelands U1’s as there are Legends rares. For a moment, let’s assume a linear relationship between rarity and price. Assuming demand is constant, a U1 from Homelands will have 1/20 the price of a rare from Legends.

Is this a flawless argument? Definitely not. But it does give you a rough idea of the potential involved. Again, I recognize I am highly biased because of my nostalgia for older sets. I’ve purchased many-a-Homelands pack in my day because they were so cheap.

My point is this: Homelands cards aren’t as worthless as they once were. They have potential just like cards from other sets. As EDH and Casual play increases at a rapid pace, rarer cards from older sets like Homelands have upward potential once they are discovered.

Look at Winding Canyons–a solid EDH staple which had very slight price movement for years. The card was “discovered” by the masses just last week and it’s already up 30%. This can and will happen to other cards from this era. I singled out Homelands because of the Tweet I shared at the beginning of this article, but the same logic can be applied to other under-appreciated sets from the same time period. These sets deserve a little love too, despite their awful history.