1. Journey into Nyx is a small third set, so there will be fewer copies of cards from it on the market than cards from Born of the Gods or Theros. This means that staple cards from this set are likely to be more valuable than cards from other sets in the block. After all, only a fraction of Journey packs will be opened in drafts compared to Born and Theros (to be specific, approximately twice as much Born of the Gods and six times as much Theros will be drafted compared to Journey into Nyx). If there are competitive cards in the set, picking them up at their floors will likely result in the largest gains of Standard pickups.

2. Be cognizant of the fact that prerelease hype will inflate the vast majority of cards above realistic values. For every Bonfire of the Damned and Sphinx's Revelation, there are ten Niv-Mizzet Dracogeniuses or Armada Wurms. You should have a really good reason if you’re going to get in on a preorder spec.

To illustrate this, check out the below graphs tracking the prices for the rares and mythics in each of the sets from last year’s block. 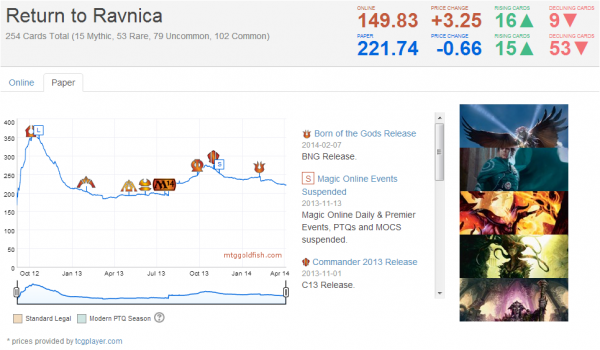 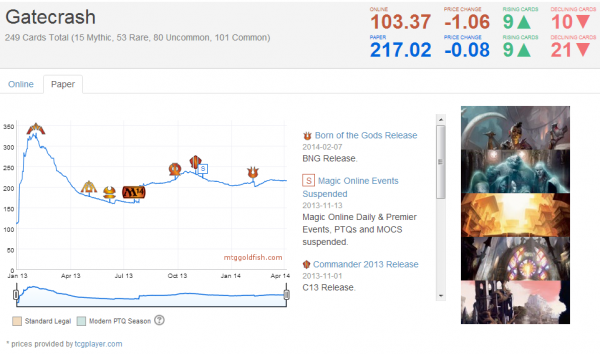 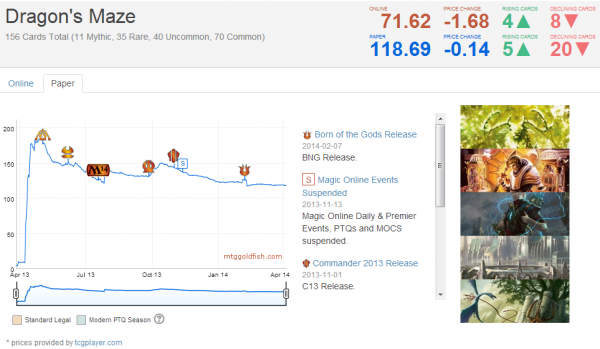 Yes, you can point to individual cards from these sets that spiked, but unless you were on those cards specifically, you straight-up lost money. Please don’t just preorder every card that looks like it will be good in your format of choice. In most instances, you’ll be able to get it cheaper in just a few weeks. If you are going to preorder something, you should have a clear reason why the card is underpriced and truly considered the history of preorder specs. Don’t throw your money away.

3. Remember points one and two during the summer doldrums, when prices are lowest and hype is passed. I’ll be looking closely at Journey into Nyx (in addition to Theros and Born of the Gods) during that time, as playable cards from spring sets are most likely to blow up big during the fall.

4. Once I have sold out of Theros cards shortly after the release of the fall set, I’ll be keeping an eye out for the floor on all of Theros block, but especially Journey into Nyx. Check out the trajectories of the 2011 and 2012 spring sets, New Phyrexia and Avacyn Restored. 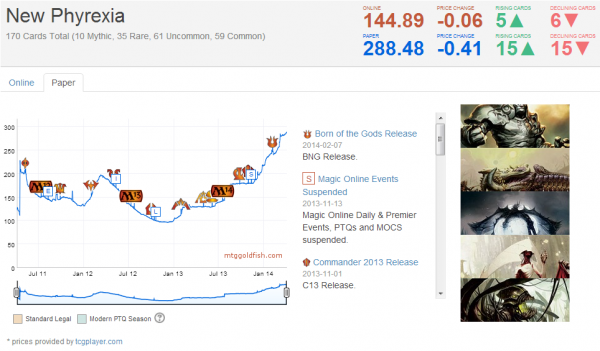 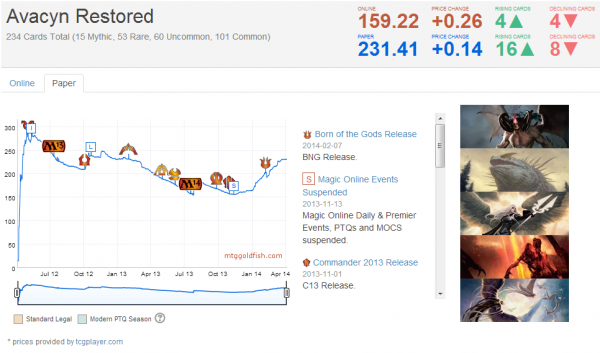 Each of these sets declined the summer following release, spiked at the release of the following fall set, then reached their floors the next summer, close to rotation. However, after a couple years, both sets have climbed back toward preorder levels, with New Phyrexia even surpassing them. This is due the high number of eternal-playable cards in NPH, but AVR shows us that casual cards can hold their own, too.

5. This suggests that the best time to acquire eternal-playable Return to Ravnica block cards is this summer. Watch for the floors on cards like Abrupt Decay, Supreme Verdict, and Detention Sphere. They’re going to hit a low point, and then they will steadily increase until a reprint or a similar, better card is printed.

6. Don’t stop at eternal staples from Return to Ravnica block. A big reason Avacyn Restored has gained back so much value is because of hugely popular casual cards. Cards to keep an eye on from RTR block include Chromatic Lantern, the primordials, and Plasm Capture. They may have failed in Standard, but the aforementioned Niv-Mizzet, Dracogenius and Armada Wurm are now dirt cheap and flashy enough to have long-term casual appeal. Progenitor Mimic, Savageborn Hydra, and Angel of Serenity will all likely grow over time.

Be it for eternal or casual cards, history shows that this summer will be the floor for most RTR block cards, so act accordingly.

7. Because Standard PTQ season is over, it’s unlikely that Standard-only cards will see a lot of movement until after rotation. I’ll be evaluating Standard-playable cards with less consideration of how they play with Return to Ravnica staples and more how they play with Theros block cards and the still-unrevealed fall set. Keep in mind that the big winner of last rotation was Nightveil Specter—not exactly a card that made people think “Standard staple.”

8. This is exactly why Mana Bloom is a bad spec despite it being cute with Journey Into Nyx’s constellation mechanic. But just because it’s a bad spec doesn’t mean you shouldn’t be digging your copies out of your bulk box—I was definitely among those who got in 25-cent copies immediately leading up to Theros spoilers, and I am thrilled that I might be getting out at a profit now. Sell into the hype, but if you have zero copies, you really should leave it that way.

9. As an aside, situations like we’re seeing with Mana Bloom—not to mention the whole MTG economy for the last several months—make me less and less willing to bulk out. Bulk always has a floor value, so unless you are looking at the absolute dregs of Magic cards, I feel like it’s short-sighted to sell bulk rares. Leonin Arbiter was bulk its entire time in Standard and stayed that way until not too long ago, and look at it now:
[cardimage cardname='Leonin Arbiter']

10. You don’t have to preorder anything. I almost never do. There are plenty of opportunities out there, and everybody is looking at the new cards. Zig left while everyone else zags right and you will have a better chance at profiting.

11. I want this article to go up to eleven, so I’ll close by reiterating that prices are hyped right now. Abrupt Decay was immediately identified as a Legacy-, Modern-, and Standard-playable card, and that has panned out almost to the extent that hype dictated. Preorders reached as high as $20 for this fall-set rare, and you’d think that would seem reasonable given that the card’s pedigree has really panned out. And yet, Abrupt Decay was available within a month of its release at half its preorder price, and fell all the way to $5 two months after its release. Keep that in mind this preorder season.

(And I shouldn't need to say it, but Abrupt Decay is on its way up, too. Be on the lookout for cheap copies.)