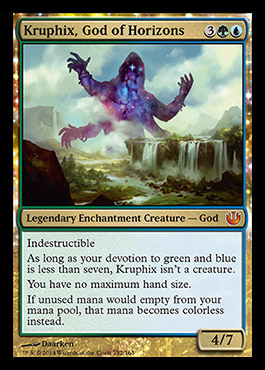 Check out all the new cards on our Journey Into Nyx Spoiler Coverage Page! Spoiler over. I found my favorite card. After giving us terrible, disappointing Simic cards for the last year, from the #4merfolk fiasco, to Plasm Capture, it’s finally good to see Simic get something legitimately disgusting. It started with Kruphix’s harbinger, Prophet of […]

Danny shares tips on how he approaches spoiler season smartly.

Jason Alt weighs in on the B&R announcement, insider trading, and the possibility that Born of the Gods is, just maybe, underrated.

Jason suggests keeping abreast of the metagame may provide a lot of insight into speculation targets, then (conveniently) covers decks from the weekend.