Due to real life being a thing, I haven’t been all that active at my LGS this summer. In fact, I’ve only been to one draft since the M14 prerelease. But that period is coming to an end. With the release of Theros, I will once again be enthusiastically engaged in my local Magic community.

My trade binder hasn’t been touched since my last draft a couple months ago. That being the case, I have some preparation to do before hitting the trade tables. Since I’ve spent the last year trading into long-term holds (especially shock lands), my binder is fairly sparse at the moment. The few cards in it were for trade as of my last draft, but things have changed as the summer has passed. It’s time for me to reevaluate what to do with these cards. 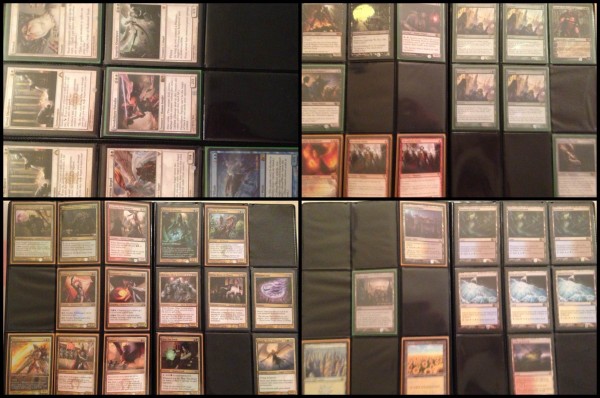 The first section of my binder (and the only one I’ll be discussing today) is made up of Standard cards, arranged by color. As you can see, this section of my binder is not especially large at this time. There’s really not much left to trade after outing most of my Innistrad stock and stashing undervalued Return to Ravnica block cards.

There are a few options for the cards I have left in my binder. I can 1) keep them up for trade, 2) hold them until values increase, 3) move them to my bulk box, or 4) pull my hair out because I just don’t know. Here’s how I’m sorting these:

Fiendslayer Paladin; Xathrid Necromancer: I’d like to trade these sooner rather than later, since both of their respective decks lose a lot after rotation.

Blind Obedience: These were around $4 when I last drafted, and are now $2. I’m tempted to hold my copies, but we’re losing a lot of hasty threats to rotation.

Chandra, Pyromaster; Garruk, Caller of Beasts: Both of these have held their value surprisingly well this summer. You could argue that these are holds, but I think the downside outweighs the upside and I’d prefer to just trade them out at current values.

Legion's Initiative: Boros looks to be getting a reasonable amount of support in Theros, and the fact that this is an enchantment could be pertinent. But I’d still rather trade this for around its current $4 value. Spear of Heliod was spoiled recently, and it seems like the better anthem for Standard.

Firemane Avenger (promo): I should have just thrown this on eBay shortly after winning it at Game Day. It’s gone from $30 to $10, and I have a hard time believing it will ever get back to that $30 price tag. I’m keeping it in my binder for the time being, but I’ll be somewhat picky about what I’ll take for it. There may be long-term potential.

Plains (APAC): I’m just waiting for the right person to see this. I’ve had a few offers, but none have been enticing enough to part with this beautiful Japanese landscape.

Underworld Connections (foil): This is a short-term hold based mainly on Corbin Hosler’s “Pick of the Week” from last week’s Brainstorm Brewery. As Corbin pointed out, the card is an enchantment and is good for devotion. But if it doesn’t break out in the first few weeks, it’s going right back into the trade binder.

Tajic, Blade of the Legion; Obzedat's Aid: These are probably on the fast track to the bulk box, but I’ll be watching.

Master Biomancer: I’ve written about my dislike for this card in the past (more due to bookkeeping than power level, to be fair), but several writers I respect seem to think there is potential here. It would be shortsighted of me to let my own opinions outweigh those of multiple experienced speculators, so I’m going to hold this copy for now.

Restoration Angel: This is still holding $7.50 on TCG Player mid and may be worth trading at that price, but it sees Modern play in both combo and control decks. I may still trade it if I can get $8, but if it dips any lower it’s definitely going into my hold pile.

Vampire Nocturnus: Before this was reprinted, it was a $20+ card. This copy has been in my binder since the M13 Magic Celebration. I could hold it and see if casual demand ever picks back up but let’s be real: I’ll happily trade this for its current value if I can.

Stromkirk Noble: It’s not really Modern playable, so any future value it has will be based on casual demand. How many casual vampire decks include red? My guess is not many. So any potential these have is based on the novelty of red vampires. I don’t anticipate that novelty to be very profitable, so I’ll take what I can get for these before they become bulk.

Farseek (FNM promos): What a bummer. I had a deal at one point to sell these for $20, but the guy kept flaking until he finally backed out. My LGS offered me $12 but I decided to get more value through trade. Then I stopped trading for the summer. Now they’re virtually worthless, so I guess I’ll throw them in a box on the off chance they ever see Modern play or the card is reprinted in a shock-land Standard again. I really dropped the ball on this one.

Obzedat, Ghost Council: The black-white deck that has been seeing play the last few weeks looks sweet, and Obzedat is a big reason for that. But Restoration Angel seems crucial for that deck’s strategy. Currently at $9, this card could go either way. I’m going to leave it my binder for now, but I’ll be keeping a close eye on it going forward.

Sigarda, Host of Herons: On one hand, it’s a rotating card worth a solid $5. On the other hand, it’s a legendary mythic angel from a third set. You could make an argument to trade it while it’s still worth $5, but I’m going to hold this copy.

Glacial Fortress; Drowned Catacomb; Clifftop Retreat: These are the buddy lands I still have left. I’ll trade the Clifftop Retreat if I can still get $5 for it, but at $2, I’m just going to hold the allied color ones.

With not many cards up for trade but with a lot of cards I’m looking to acquire, I recently decided to set aside $50 for specs. So on what did I spend my hard-earned money? Penny stocks. Check it out:

Beck // Call: 20 copies at $0.49 each – Glimpse of Nature is a $20 card, and this is the only option for Modern Elves. I doubt it will ever be lower and being from unpopular Dragon’s Maze gives it huge upside.

Diluvian Primordial: 3 copies at $0.25 each – A near-bulk price for a potential casual hit.

Firemane Avenger: 6 copies at $0.75 each – I wrote about my high hopes for this card several weeks ago, and I still think there is profit potential here. This was a good price so I bought them.

Mana Bloom: 6 copies at $0.25 each – It’s a ramp option leading into an enchantment block, and by self-bouncing can trigger ETB abilities multiple times.

Merciless Eviction: 4 copies at $0.45 each – Six-mana sweepers are not always playable, but this one has options and it kills Gods. I would have bought more at half the price, but at this price I wanted to have a few just to hedge.

Molten Primordial: 2 copies at $0.15 each – Getting in at literal bulk price absolves me of all risk.

Plasm Capture: 8 copies at $0.66 each – You may not have noticed, but this is Mana Drain. It’s hard to believe there won’t be casual demand for this card down the line, and this seems like a fine buy-in price.

Scion of Vitu Ghazi: 4 copies at $0.42 each – I honestly don’t have a lot of faith in this one, but it’s getting some buzz in the community and I wanted to cover my bases.

Thespian's Stage: 17 copies at $0.99 each – Vesuva is a $10 card and Gatecrash wasn’t nearly as popular as Return to Ravnica. I already had a few playsets of this card set aside, and this seems like a fine buy-in price to solidify my position.

Wear // Tear: 13 copies at $0.23 each – This is a few cents higher than I would have liked to buy in, but it seems like solid sideboard tech for both Standard and Modern. My biggest concern with this one is that it doesn’t kill Gods, but it’s still a versatile card that’s a straight-up two-for-one.

With a couple dollars for shipping, my total for these cards came to $48.94. I’m confident that most of these will appreciate in value over time, and by buying in so low, I’ve minimized my risk.

Join me next week when I continue to discuss my preparation for rotation. This is the time of year where money is just begging to be made, and cards you pick up now can be paying off for months or even years down the road. Do your research, have a plan, and make it happen.

4 thoughts on “Insider: Cleaning Out My Binder”