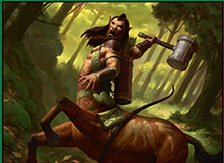 You didn't exactly ask for it, but you got it. A Centaur Lord!

He is a Hill Giant rather than the Pearled Unicorn that Lords are typically, but he has two abilities both on himself and to impart to other Centaurs. Are centaurs too expensive and slow? Are they going to be too powerful when they get going for the opponent to stop? Is there a deck this can go into? People are brewing, so there might be a deck ready to go.

Redditor /u/LargeBarrelBomb has a few ideas.

Sorcery (4)
4x Call of the Conclave

Fated Intervention is a card I have seen touted as a potential way to trigger Constellation and therefore a potential budget spec. There is no downside (besides totally whiffing) and a decent degree of upside. I am not buying in, but I won't publicly mock anyone who does. Like the Minotaur deck, I feel like the Centaur deck needs a 1-drop or two, but perhaps Elvish Mystic is the ideal turn one play in a deck like this anyway.

Does this deck have legs? Centaurs have 2 sets of legs. Plus arms. That's a lot of limbs. I think if I could have extra limbs, I would rather have 4 arms like Goro from Mortal Kombat. That would be sweet. What was I talking about, again? Oh, right. Is this deck OK? Try it out. Or don't. I'm not your supervisor.