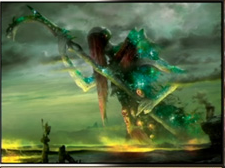 The spoiler is more spoiled than the single child of a Kardashian. It is like a Dothraki tradition to Irri and Jhiqui- it is known. You get the picture. People are making like prohibition's on and they're home brewing.

So what are people up to? Atheros, God of Passage looks like a good place to start, and Redditor /u/the_nayr is on the ball with a tasty Atheros brew to get us started. Is it perfect? Can't say; haven't sleeved it up. I will say it's a start, and it won't bear fruit if you don't run it up the flagpole and see if anyone mixes their metaphors. Here's the list he recommends.

As someone who's been hoarding Solider of the Pantheon like a Ron Paul supporter hoards gold bars, canned food and tin foil (you know, for hats), I hope this deck has legs. I think there is significant upside for Xathrid Necromancer and the price for that is low due to panic brought on by great black removal and a reprint in an event deck. Now you can tell your opponent to bring that Bile Blight on. With Cartel Aristocrat and Varolz, the Scar-Striped as sac outlets you have a potent engine here and the junk archetype is no stranger to these kind of shenanigans. Pretend it's 2013 and you're Brad Nelson and sleeve this bad boy up. Or don't. I'm not your supervisor.

4 thoughts on “GWB Junk in Journey into Nyx Standard”