As of late, it feels like the finance world has been holding it's breath.

For a time, there were many cards that were shooting up almost daily in price. Only to fall back to Earth within the weeks to follow. Those times left much hope that there were quick profit gains and large amounts of room for anyone that wanted to get into finance to make money or subsidize their collection.

Subsidizing your card pool to put decks together can still happen. I am not so sure the "quick buck" is still here though. The changes Wizards has made to the Pro Tour Schedule have been subtle, but I'm starting to see the long-term impact these changes are going to have. 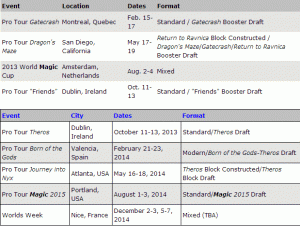 The addition of an additional qualifier season may not seem like much, but since that qualifier season is now draft, it will have an impact on card pricing and longevity of formats. The window of opportunity has absolutely shrunk now, while the time necessary to put certain cards on a holding pattern will be longer in some cases.

There are only so many months in the year, after all. This application of a new qualifier season, while also compacting and concentrating the other seasons, means that you will have to strike hard and fast during a season for it to be the highest profit yield.

A financier usually operates on two channels. 1) We wait for cards to clear through one of our chosen retail means. 2) We wholesale to other vendors in order to re-up on liquid capital and reinvest in another wholesale collection. The usual attitude is that we have the time to make these transactions become a healthy mix of retail and wholesale in order to come out on the highest amount of cash available in a set amount of time.

That's now going to be harder.

This is phenomenal news for those of us who actually focus our time into tangible hard-fought results. This should also bring a kind of checks and balances to the rest of the finance world.The "weekend warrior" will end up missing out on some opportunities because of Mom wanting them to go camping that weekend. Or, work called again--and you'll need to be on shift, instead of going to SCG: ___________.

This is all fine and dandy. No one said this hobby had to take over your life, but now--with a smaller window to take advantage of the hills and valleys of formats--it becomes so much more cash- and time-intensive to really see tangible results.

If you find it hard to picture the subtlety of this effect, remember that demand takes time to spike, as well as time for the investment income of players to cycle.

Think about it like this: Tim is working his standard 9-5 job and loves to play older formats. Modern comes around and he's been piloting Deck X for a while. While the initial investment was sound, and he really enjoyed playing the deck last Modern season, the format has now changed. He doesn't realize this until the first of three local Modern Pro Tour Qualifiers takes place near him.

Now, he's devastated because it's plainly apparent Deck X just isn't going to cut the mustard now. There are more players, tournaments are longer with more rounds, and the more skilled players are finally coming out to participate in Modern. Modern has finally taken off thanks to Modern Masters being a huge hit.

Now, what does he do? He puts the pieces together for a better deck, creating demand, while wholesaling, trading, or retailing the pieces of Deck X that he can. This will take time. Not only that, but what if financially speaking, his job only pays him twice a month? This is the average player.

The average player is what your thoughts needs to be, daily. That player is you. It's not the dollars and cents of the hottest card right now. It's who do you know that is constantly looking for cards? Who do you know that does not like their deck consistently and wants to trade often? Who is always opening boxes, and wants to subsidize that cost by selling half of it?

How many tournaments are you going to? How many ads are you responding to on Craigslist? How many auctions are you looking at on eBay? All of these things take time, in order to take advantage of just one card's uptick in price.

This game is a people game because it is the people that play it, that make it, that crave it and love it. Bellow those passions, provide the service they need, and they will love you for it. You can both make money and enjoy a wonderful hobby.

That time allotment will cycle faster now. That window of opportunity to invest at lows and sell at highs will shrink. It will become more important to find a game plan and stick to it. More draft formats will mean more people practicing drafts, which will mean more packs opened and greater supply, thus affecting demand and pricing.

The subtle nuances of this, combined with Wizards deft handling of reprinting and supply philosophies is something most people gloss over completely. Don't let that underlying driving force determine how successful your business is, for it is the till of your ship. Would you like to sail rudderless? I wouldn't.