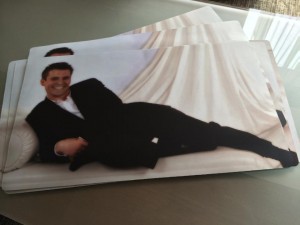 You may have seen this around the Internet, but the full story has never been made clear. I know you're saying stuff like "But we have Conspiracy Spoilers and new Standard decks to talk about!"

But this is clearly more important, right?

Brian Kibler is a great player and ambassador for Magic, and he knows how to poke fun at himself. I wouldn't be caught dead using a mat like this myself, but I understand why a lot of people do. After all, it's a conversation starter at least, right?

Anyway, these have become the new fad of the week, so I thought we should at least figure out the story behind them, right?

Well, Kibs has our collective backs.

A few nights during the cruise are formal nights, which are prime picture-taking time, since people are dressed their best. On one of those nights, Natalie and I went around from station to station having our pictures taken. We’d had a few drinks, so we were being pretty silly. At one of the stations, they had us pose together, and then had Natalie lay down on a lounge chair by herself for her solo shot. When it was my turn, I insisted on posing the exact same way. When we went to look at the pictures the next day, we knew we had to buy that one because it was just too funny...

You can read, in his own words, the rest of the full story of how this came to be on his blog, which you can find here.

Enjoy! Remember, this is important stuff.

5 thoughts on “The Story Behind the “Kibler Playmat””