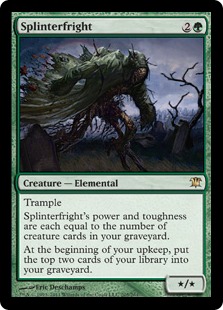 This is a conversation brought on by an interesting Reddit post (which you can find here), so I decided I may as well share one of my most embarrassing misses.

The highlight of that thread, for me, is Brian Kibler being completely honest about his biggest miss: Daybreak Ranger // Nightfall Predator. I remember when that happened and Ranger was supposed to be the next big thing, but it never really took off.

It was the same with my biggest miss: Splinterfright.

I thought this would be a thing. I got 94 of them at under 50 cents, and I thought with Dark Ascension the archetype could really take off. And, to be honest, it nearly did. There just never came the right metagame for it, even after more support cards came.

The investment definitely didn't work out, but it's not keeping me up at night either. I didn't lose much on these, and had it worked out it would have paid off really well. But hey, live and learn, right?

Anyway, that's my story. What was your biggest miss, either speculative or just in theory? What did you think would become a force but never quite did?

12 thoughts on “What card were you most wrong about?”