For two and a half years I lived the city life in South Boston, MA. The experience was enlightening and my family persevered many challenges while living a lifestyle we were unfamiliar with. My job description was also a new one, presenting new growth opportunities as I learned the new skills required to succeed.

A coaching a manager of mine taught me a lesson while I was going through a rough patch. At the time, I was struggling to find inspiration at work, my spouse and I were feeling homesick for Cincinnati, and it looked like my career was going nowhere. My manager said “Sigmund, you can choose to prioritize career growth, job satisfaction, or location. But usually you can only actively pursue two of the three.”

This concept resonates with me, and it reminds me of a sign I once saw at a fellow colleague’s cubicle: “Cost, Time, Quality. Choose two.” An engineer could not state the truth any more concisely than this.

You’ll have to believe me when I say this thought randomly popped into my head late last night while I was preparing for bed. I wasn’t trying to force any connection, yet the ah-ha suddenly appeared. There exists a parallel triad of desirability in the realm of MTG Investing.

Consider this proposal: you have risk level, profitability potential, and convenience/time. Choose two.

Rather than explaining things further through abstraction, allow me to cite examples to explore what I mean.

If I think critically about my collection, this combination of priorities is where the majority of my MTG investments lie. By ensuring I am taking on minimal risk while also giving myself the maximum potential for profits, I am essentially investing in the blue chips of MTG.

For example, my Innistrad Booster Box investment is a clear candidate for this category. These boxes will never drop in price, suggesting there is virtually no financial risk to such a buy. There is also significant profit potential with these. Although it may take a long time, these boxes could eventually break $400, much like Rise of the Eldrazi or Ravnica Booster Boxes have: 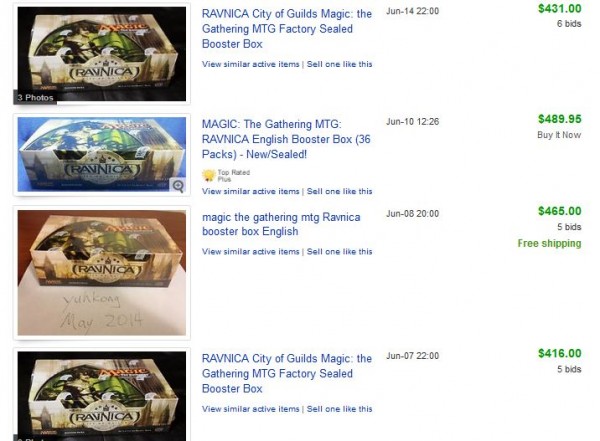 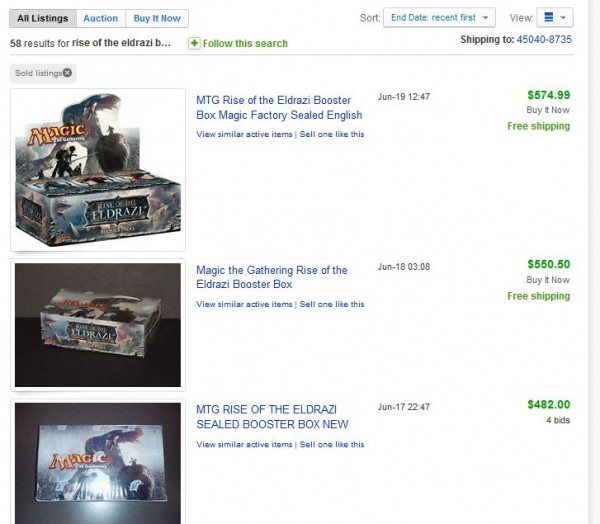 The sacrifice one makes by making a large investment in this space is convenience and time. I’ve been sitting on my Innistrad Booster Box collection for roughly two years now, and I still am struggling with selling these for any reasonable profit. The opportunity cost here is immense. I could simply wait five more years to net better returns, but this is a long time to sit on sealed product which I can’t enjoy in the meantime. The money could have been better spent in Dual Lands.

Additionally, there’s the drawback of inconvenience. With stuff like Booster Boxes, it’s a major hassle to sell and ship these. Shipping starts in the $10 range, and the exact price people are willing to pay on Booster Boxes can vary by up to 20%. Look at the above completed listings on Ravnica Boxes, for example.

One guy may be willing to pay $490 for their box, but that doesn’t mean you could sell your boxes in that range. Many people would cite the bottom box in the image above to argue that the value is $420. The difference, a whopping $70, is nothing to sneeze at. Yet such a large spread means countless negotiations with prospective buyers who are willing to get the best deal on the net.

Other MTG investments in this category include some misprints, unplayable Summer Magic Commons, and graded yet unplayable Alpha Rares. Anything that won’t really drop in value, but is not readily salable for profit without finding the perfect buyer.

In the future you can be sure I will not place such a large portion of my funds in this investing category. While I like large gains with minimal rewards, such investments are more appropriately geared toward a 401k and not a hobby based on speculation!

In this category, the main focus is on keeping risk low while also looking to make profit in a quick and easy way. This approach is akin to trading for cards with very low spreads between sale price and top buy list. By moving your Rasputin Dreamweaver into Temple of Maladys you get rid of something a bit over-priced on TCG Player and pick up a card not too far from buylist. 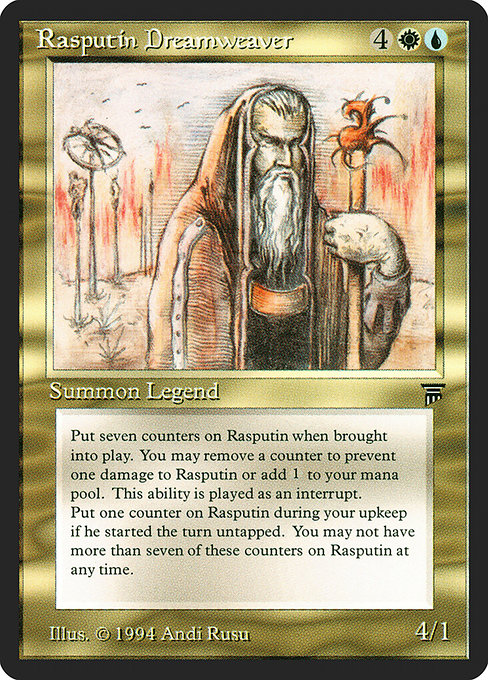 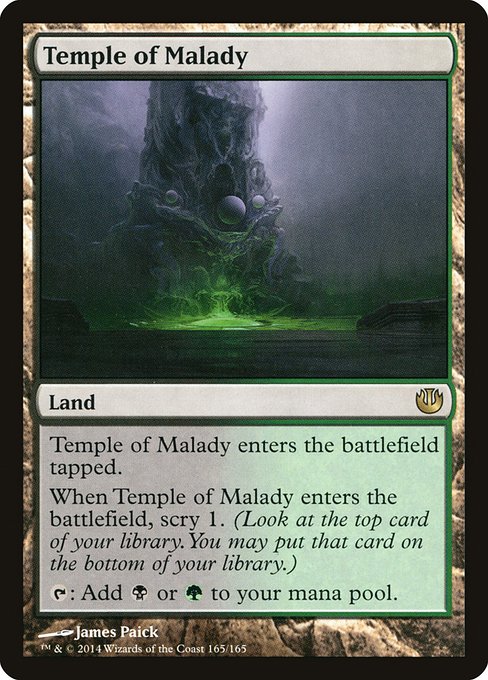 This strategy has been discussed on this site for a long time now. The goal isn’t to rip others off in trade. Rather, the goal is to trade cards which are a bit too expensive on whatever site you’re referencing for values in order to obtain cards which are more fairly priced. It’s almost like selling for cash, except it’s kosher and no money exchanges hands between players.

There are MTG investments that fit this profile as well. In fact, Theros Temples and Thoughtseize are currently my favorites.

Thoughtseize has had my attention for the last couple months, and I firmly believe it’s at the bottom. As Standard rotates and Theros packs are no longer opened, the supply on this powerful discard spell will dry up. The spread on this card is already quite small, and buying at $14ish could be one of the easiest ways to profit in six months. If buy lists don’t jump above this price, it will at least be easy to trade these at $20 all day.

The sacrifice made with this investing profile: upside may be limited. While Thoughtseize may be one of the safest, easiest paths to value today, the upside could be capped simply because so many copies were opened. It would take another significant boom in Magic for this card to break $25 retail in the near term. It may be a sure thing. It may be incredibly easy to move these for profit in six months. But don’t expect to double up on such an investment.

Other cards that may fit into this category are Abrupt Decay, the recently reprinted Legacy staples in Conspiracy such as Stifle, or even something like Eidolon of Blossoms or Eidolon of the Great Revel. All of these should rise by 2014’s end, yet dollar gains won’t likely hit double digits any time soon. 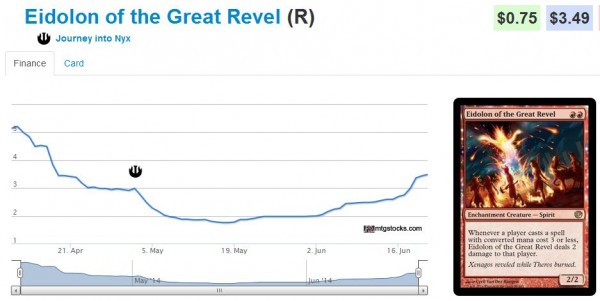 In this final investing profile, caution is thrown into the wind. Considerations of risk must be put aside in order to make quick, sizable profits. This is where speculation truly occurs in its purist form.

When Master of Waves broke out at the Pro Tour a while back, the card made significant gains for many people in a very narrow window of time:

Those who profited most were the ones who bought up this card before anyone knew just how dominant it would be in the Pro Tour. If no Mono Blue Devotion strategies had ended up in the Top 8 of that tournament, the card’s price would not have moved so high. Also, if the buyer would have held on to this card for too long, they would have seen all their gains wiped out. Significant profit was on the table in a short period of time, but such gains could not have been attained without accepting the risk.

If the strategy had gone bust, Master of Waves could have behaved more like Nivmagus Elemental, spiking and then crashing before people even received their speculative purchases in the mail.

In addition to sudden buyouts, this investment category also includes those truly speculative gambles. An example of such a bet that paid off was Nightveil Specter, which saw significant gains thanks to Devotion strategies:

But for every successful gamble like this one there are a number of failures. One of my worst bets was on Skaab Ruinator – the graveyard synergies I predicted never really panned out. The result was a very quick loss: 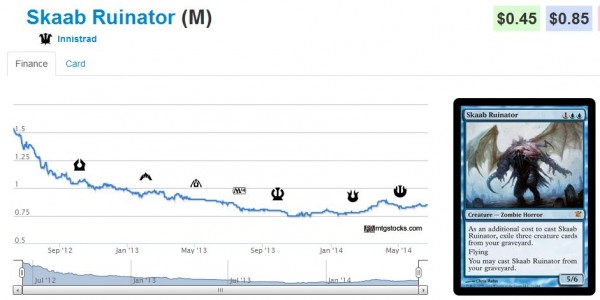 Investing in this space can be exhilarating due to the potential rewards in short periods of time. But anyone speculating on such cards must accept the risks involved in order to be fully aware of what they’re doing: strategic gambling.

Know Where You Operate

I recognize myself as a fairly risk-averse person. Therefore I will often sacrifice amount of profit and convenience when making my MTG investments. The profile suits me well, although I’ll admit I spend too much time on slow-growth buys like Booster Boxes and not enough time on short-term winners like Thoughtseize. The risky profile is fun once in a while, but it’s a space I spend little time within.

Your MTG Finance style may be completely different from mine. Some people enjoy the thrill of a quick buck despite the risk. Others buy up hundreds of copies of Temples anticipating modest gains in the coming months. Whichever style you prefer, it’s wise to acknowledge that sacrifices are almost always made. Knowing my priorities helped me move towards a more fulfilling career at work, and, by keeping these MTG Investing priorities in mind, I should also have a more enjoyable experience here as well.

Can profitability, risk, and convenience all be managed simultaneously? Perhaps. Sometimes we get lucky and the right opportunity presents itself out of the blue. Just don’t plan on making a living with such occurrences. They never happen as often as we’d like.

But if you focus on the right priorities, you will be much happier with your MTG Finance experience.