I took a swing at a new format last week and I think I'll take another jab at it. Between reintroducing checking tournament results on the free side and checking price changes over here, I'm reintroducing good habits into my life as a financier. Let's develop good habits together, shall we?

Did Everyone Notice This?

In this business, that "sold out at $100" is known as a win. I think a lot of people from this site including some of the writers have been on the "Foil Decay" train, and it's looking like it paid off.

I'm not sure it will maintain such a high price, but I'm getting out for as close to $100 as I can right now. When it initially began to flirt with $50, I sold enough copies to break even, a technique I learned from Ryan Bushard. With my initial investment (I bought in at $20) recouped I still have an awful lot of copies in reserve and it's all gravy. Even selling to a buylist for $60 I triple up, which feels great.

People who missed out on $20 foils but who bought $5 non-foils can't be mad at $12 for non-foil. Over a weekend where not much happened financially with everyone drafting Conspiracy like mad, the GP being Team Sealed and nothing being spoiled, I am glad someone moved the market for me.

I Didn't Buy Abrupt Decays - Why Should I Care?

I'm glad I pretended you asked that, because it's worth looking at the logic that made me decide to dump so much money into an unproven card so we can prove it wasn't a fluke and do it again.

First, let's take a look at what was going on when foil Abrupt Decay was $20. 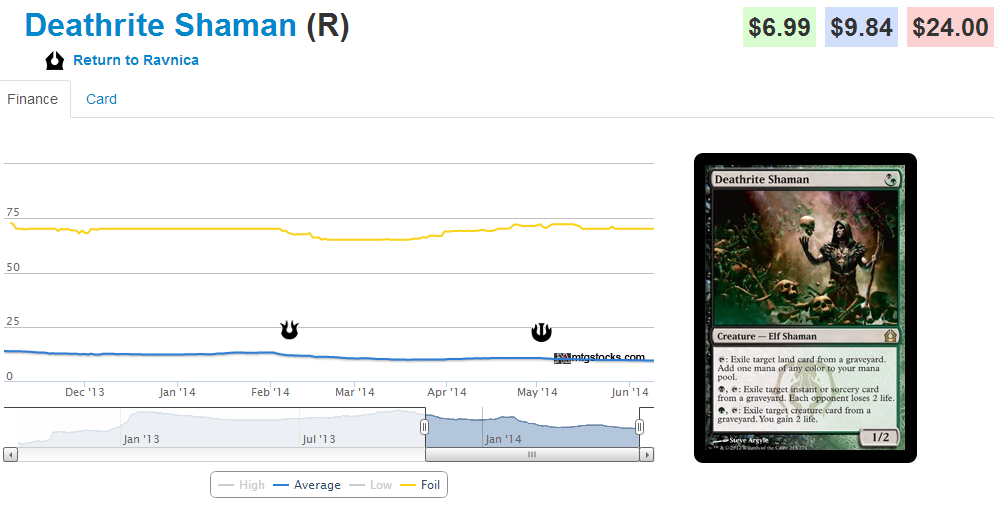 We had an odd situation. For both of these cards the foil price was roughly five times the non-foil price but the adoption was the same. Before Deathrite Shaman really started to terrorize Modern and got banned, it had roughly the same degree of Legacy adoption as Abrupt Decay.

The Standard adoption was different, but the Legacy adoption has much more of an effect on the foil price than does the Standard adoption, so really all we were looking at was Legacy. Decay is Gold Star removal in Legacy, dealing with Tarmogoyf, Delver of Secrets // Insectile Aberration and even Counterbalance cheaply and reliably. Green-black decks already had amazing removal like Pernicious Deed and Maelstrom Pulse and the fact that Decay got any consideration at all spoke to its power.

I felt like the price discrepancy between Shaman and Decay was unlikely to persist. I don't think there needs to be a sliding 5x multiplier for Legacy foils and the only way for foil Decay to go up is for non-foil to do so since there are as many foil Decays as there are foil Shamans. I saw what I felt was a discrepancy, and now that Decay is paying off, it pays to look for similar discrepancies elsewhere.

Now a lot of this is predicated on a few "assumptions", but they are assumptions that have a basis in historical precedent with respect to Magic finance. If you want to identify a discrepancy, make sure the cards you're comparing are comparable.

These are important factors to consider when trying to compare two cards. Comparing foil Geist of Saint Traft to foil Delver of Secrets // Insectile Aberration doesn't make much sense and we need to try and avoid doing things like that if we're to identify good candidates for a price correction.

Any Good Discrepancies This Week?

Okay, hang on, because that isn't to say that nothing happened financially worth noticing and we do have some graphs to look at. 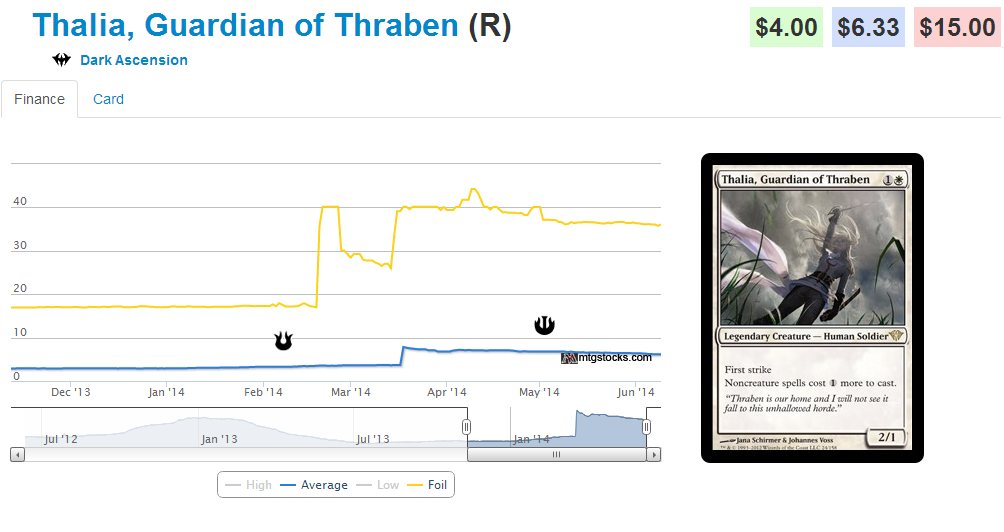 This is a card whose foil is behaving oddly. It's really hard to get a fix on it because unlike in the case of Abrupt Decay, Thalia's foil price around the web has resisted price increases by Star City. They had it at $50 at one point and the market did not get in line. Recently it has been pegged at $40 and the market seems finally ready to accept that price.

I think there is growth potential in both the foil (modest potential) and non-foil (much higher potential) versions. Death and Taxes is popular and other decks like Maverick and even Goblins have taken to jamming this plucky little math-ruiner into their lists.

Dark Ascension sealed product is a pretty atrocious investment in most peoples' eyes, making the number of copies of Thalia out there a little more stable. There isn't much chance of a bunch of boxes getting popped in a few years as sealed boxes make their way to the market.

Thalia was also in a duel deck, but historically that hasn't mattered a great deal. This doesn't seem like a $6 card with the increased play it's getting lately and the farther we get from Dark Ascension, the more dear these will be. This is frequently a four-of and that matters a great deal as well.

I wouldn't pay cash right now, but I would watch the graph for any hint of an uptick, because this tends to jump rather than climb. Its current spread of 40% doesn't portend any positive value change soon, so I'd call it a card to watch and not to take action on.

I really struggled to come up with a card analogous to Blatant Thievery. Insurrection? Master Warcraft? None of them truly fit.

What is significant here is that EDH-specific cards have shown a lot of growth recently and the ones that haven't are just brimming with growth potential. We live in a world where Mana Echoes is worth more than Riptide Laboratory.

To that end, it's worth more than Enchantress's Presence, which is a card I would keep an eye on. With the printing of Eidolon of Blossoms, there will be a new focus on Enchantress Shenanigans. Enchatress's Presence is played in Legacy as well as EDH so any amount of increased interest should take it higher than the peak we're seeing for a card like Blatant Thievery with the same rarity from the same set.

Thievery is just the next card to join Mana Echoes and Gratuitous Violence in the "$5 card club" which is like the $5 shave club, only enjoyed by fewer people who wear bluetooth earpieces.

I like cards from Onslaught, Torment, Scourge and that general time-frame for a lot of reasons. Back then they printed slow, durdly cards like Forgotten Ancient which would later become EDH gold. While the yearly re-issue of Commander sets is troubling from a reprint perspective, cards from this era are still much, much safer than newer cards.

The latter have higher print runs associated with their sets and the distinction of being legal in Modern. Modern legality makes them eligible for reprint in a future Modern Masters set, and the last one demonstrated WotC's willingness to eviscerate prices of cards like Stonehewer Giant and Divinity of Pride almost on a whim. 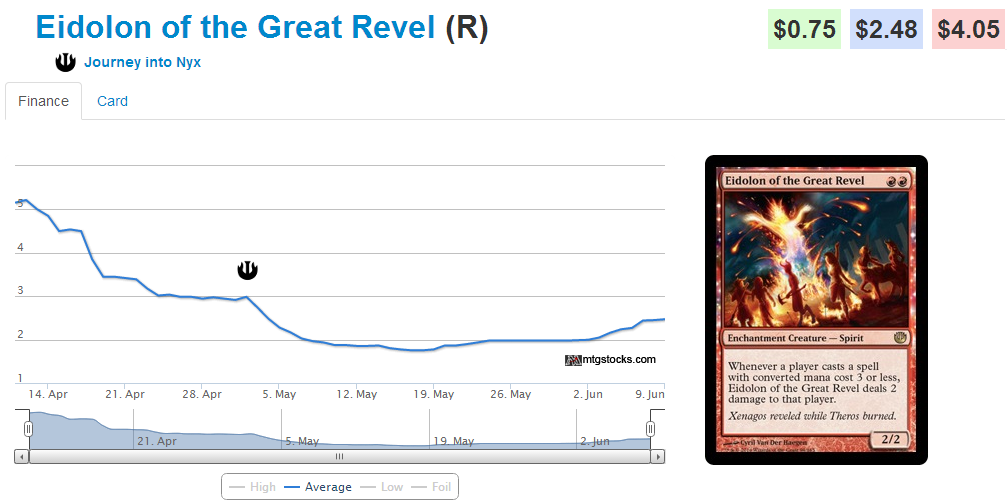 Too late to buy in at the absolute floor, but I am trading for these. I think they have utility outside of Standard. Is this another Vexing Devil? I can't say. Khans of Tarkir could throw so many colors at us that we don't want this at all, but this has a full year to do something, and buying in near a floor seems fine.

I won't say $2 was the floor, but it was a floor as the card is trending upward. I think red devotion is likely still a strategy even after Khans block comes out. Black loses a lot of gas, but red maintains a lot of its best cards and this will do some real work. I don't like these for cash right now and I can't tell if that's related to the card or my own reluctance to pay retail for anything right now.

This is out of actual control. Here we have a card that isn't letting the mere fact that it's played in one deck in Modern or that it's been printed three times hold it back in its quest to break the $10 barrier.

These just sat and did nothing for a long time because we keep getting "better" lands. Steam Vents. Cascade Bluffs. Sulfur Falls. People never imagined they would be the best way to get a red or blue mana on turn one besides taking two damage from a shock. Splinter Twin doesn't really want to be doing that but Storm sure does. You hit that turn one Serum Visions or you're a dog in the match sometimes.

A lot of the other enemy-colored fetches are cheap right now and waiting to be scooped. EDH sometimes wants them which gives you a nice cushion underneath the price. I trade for every one I can find, especially the enemy-colored ones.

Did you know Yavimaya Coast was $3.50? I bet you didn't before you looked. With a spread under 30% in some cases, these seem solid for trade targets. You don't know if another one will hit $8 and which one it will be if it happens, but Coast is a good bet, having blue in it and all. Llanowar Wastes makes green and black mana; I wonder whether that will ever be significant in Modern.

If they never do anything crazy like Reef did, they'll still climb slowly and steadily. If they do something crazy, you'll be ready. If Caves of Koilos goes nuts and the Event Deck reprint pulls its pants down, we'll live. I see this as low risk.

What Else to Keep an Eye Out For

I have been checking the daily price change reports every day and trying to figure out analogous cards if there are any. If there are, why haven't the analogous cards gone up? One more printing? Not a four-of in the deck that plays both cards? Power level disparity (We don't expect Rage Reflection to command the same price tag as Mana Reflection)?

If you can't think of anything, check out that analogous card and keep an eye on it. We don't make much money by noticing a spike in the price of City of Traitors and trying to run out and react. We see that Ancient Tomb might be due for a bump and get ahead of it.

We're not always going to hit doing this, but the real money to be made is by being ahead. Your copies bought the day a card explodes on camera may not get shipped. You're competing with other reactive people for copies when you wait.

People who are a week or two ahead have the luxury of getting their copies arranged, listing them and waiting to adjust the price according to new adoption. You have the luxury of having 50 copies on your desk ready to buylist for three times what you paid. You have the ability to be a hero, striding into the LGS with four playsets ready to have trade value veritably foisted upon you.

You can bet I have my eyes out for price discrepancies. Will Dictate of Erebos stay much cheaper than Grave Pact for an amount of time that makes us suspicious? Will foil Young Pyromancer continue to not have its price increase at all over another entire year? If I spot anything, you better believe you'll hear about it here. Check back next week to see what we can see.

9 thoughts on “Insider: What Doesn’t Go Up”