Mountains were on top of the mountain in both tournaments in my new home town of Las Vegas, Nevada, last weekend, as Kevin Rand piloted Mono Red Aggro to a victory in the Standard Open and Bryan Camidge took Burn to the promised land. Here in the desert in late June, when temperatures regularly top 100 degrees, it's only fitting that both winners won the trophies by turning up the heat on their opposition.

Tom Ross' innovative Boss Sligh took the Invitational by storm, but Kevin Rand proved that the win in Columbus for Foundry Street Denizen & Co. was no fluke. On his way to the top slot, Kevin took down B/G Devotion, Mono Black Devotion, and finally U/W Control in the finals, which are some of the most popular decks in today's Standard metagame. Even newly minted Season 3 points leader Joe Lossett, whose top 8 finish with U/W Control in the Standard Open launched him into the lead for the SCG Players' Championship automatic qualifying slot for the season, couldn't slow the Red Tide from Kevin's aggressive creature deck. 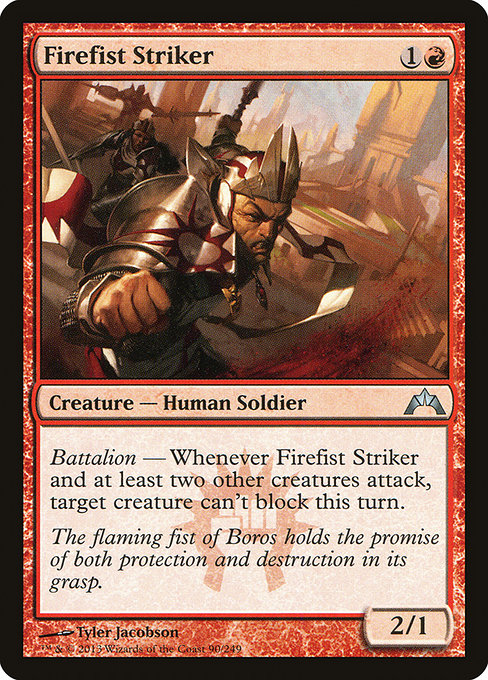 Burning-Tree Emissary, Firefist Striker, and maindeck Searing Blood. In reality, this deck much more closely resembles Patrick Sullivan Red (minus the Mutavaults and Gore-House Chainwalkers). PSulli, the patron saint of red mages everywhere, recommended his namesake red deck for the Invitational in Atlanta that Derrick Sheets won and has been espousing its virtues ever since. I'm personally a convert, having sleeved up Firedrinker Satyr in one form or another for every Standard tournament I've played since! Jackal Pup is just as good today as it was when it was first printed fifteen years ago, it seems.

If you are looking to combat the red menace, I'd look in Temple Garden's direction. Danny Smith's tenth place G/W Aggro list is a good example of a proactive strategy that is just slightly bigger than the current red decks while still being sveldt enough to get under most control decks. Additionally, Junk Constellation seems nigh unwinnable for the red team. SCG's Brian Braun-Duin has been the biggest supporter of the strategy thus far, and with red decks on the rise it's easy to support a deck that has not only Courser of Kruphix and Sylvan Caryatid but also access to Nyx-Fleece Ram and Doomwake Giant. Oy vey.

After the flames from the Standard Open settled down a bit, the Legacy Open began... and more of the same could be seen! I fell victim to a Burn deck in round 1, and I wasn't the only one. Late into the tournament, four or five Burn decks were in contention for good finishes. Burn took not only first place, but also ninth place in the Open in Vegas! Players such as myself were not well equipt to deal with Flame Rift, Price of Progress, and good old Goblin Guide this past weekend.

In addition to Burn's big finish, it should be noted that three copies of Elves and also one Belcher made top 8, making for pretty much the minimum number of Force of Wills and Brainstorms in the playoff rounds. That's much fewer than we normally see, and might be a sign of the local metagame but could also be an omen of things to come in the coming weeks.

Be warned: it is possible that more people than usual will be running Lava Spike, Wirewood Symbiote, and Tinder Wall in your next Legacy event! With all three veritable 'combo' decks requiring attention from sideboard slots, it's possible another type of combo like Ad Nauseum or Dredge could take the metagame by surprise thanks to the lessened attention.

And that is the main problem facing control decks like Miracles right now: the threats are too varied. Not only do you have to worry about dying on turn one or two, but you also have to contend with Death & Taxes and things like Lands! As always, I advocate an aggressive strategy. RUG Delver has been the go-to for aggression in Legacy for quite some time now, and you could do far worse than sleeving up Tarmogoyf alongside Delver of Secrets // Insectile Aberration for the upcoming future.

This weekend was a triumph for kitchen table Magicians everywhere. Keep your several hundred dollar mana bases and tricky interactions!

One thought on “Red Dead Redemption at #SCGVEGAS!”