Not since Gerry Thompson earned first place in both the Standard and Legacy Opens in Pittsburgh in September 2011 has a player managed to win both SCG Opens on the same weekend. A few have come close: Tyler Wilkerson won on Sunday morning in Orlando earlier this year before falling in the top 4 on Sunday night. Reid Duke had the same result in DC last year.

Perhaps the closest was Will Craddock, who finished second in Standard in Dallas before winning the Legacy Open, but the sweat wasn't the same. Ross Merriam's journey provided that excitement; after winning with Mono Blue Devotion he made it all the way to the finals on Sunday night with Elves before losing to Dave Shiels' Death and Taxes.

Connecticut native Ross Merriam has had a lot of success on the StarCityGames.com Open Series, but this past weekend was arguably his best. He entered the weekend with 66 Open Points, but with his first and second place finishes he earned himself 35 point to launch himself into the top 10 in the Season 2 standings. While it could be argued that his Invitational finish in Atlanta is a bigger achievement, the sheer rarity of what Ross accomplished last weekend in Providence is perhaps more impressive. 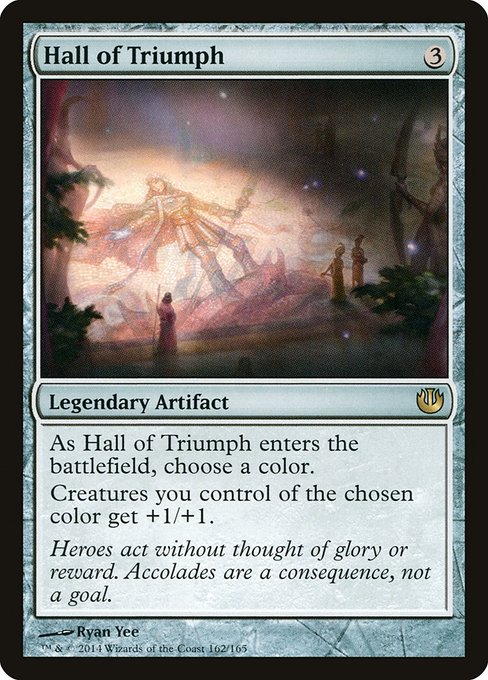 Mono Blue Devotion was the weapon of choice for the eventual Standard winner, a deck that has seen a drop in popularity recently. A favorite in the format since both Team Revolution and Team StarCityGames (now Team CFB Pantheon) brought the deck to the forefront at Pro Tour Theros in Dublin, Thassa and Co. have stayed near the top of the metagame. Oddly, Mono Blue has never been the number one most played deck, always taking a back seat to Mono Black, Esper, U/W Control, Jund Monsters, or some mixture thereof.

Yet the deck remains competitive, and Ross' version featured the addition of not only a pair of colorless Glorious Anthems in Hall of Triumph, but also a little older tech in the form of a singleton Galerider Sliver as a ninth one-drop as well as a way to give Mutavaults wings.

Beyond Ross' result, there were several notable decks in the top 8. Second place finisher Gino Bautista's Mono-Red Aggro deck was a breath of fresh air as well, featuring Chandra's Phoenix and Firefist Striker without Purphoros getting in the way. The only card that mentions 'devotion' in his deck is Fanatic of Mogis, but those Fanatics pack a punch thanks to Boros Reckoner and Burning-Tree Emissary.

Jim Davis' U/W Control list in the top 4 is also notable, mostly in what it doesn't have: no Detention Sphere, no Banishing Light, and only two Jace, Architect of Thought. In lieu of those, Jim was able to run Planar Cleansing, which is particularly potent in a field overrun by Jund Monsters and opposing Oblivion Ring clones. If this is the direction that U/W Control is likely to head in, it's possible that we will see the return of decks that gain a lot when Detention Sphere is less prevalent like Green Devotion or even pseudo-combo decks like Thassa's Ire combo.

Moving to Legacy, Dave Shiels' finish should also be noted. Death and Taxes has defeated Elves in the top 8 of two Opens recently, with eventual Cincinnati champion Per Nystrom's victory over Elves master Riley Curran only a few weeks ago.

This speaks to Death and Taxes' durability and power, since most would call the matchup tough at best. But Dave was able to defeat the little green men in the finals, after taking down the current Magic Rookie of the Year leader Jared Boettcher in the quarters and Jerry Mee in the semifinals.

If it weren't for his carmate Ross' historic run, more fanfare would be made for Jason Ellis as well. Jason made the top 8 of the Standard Open with Mono-Black Aggro and the top 4 of the Legacy Open with RUG Delver, even dispatching the Hundred Bearded One Chris VanMeter in the top 8 before falling in the semifinals. But when the guy you rode with earns 35 Open Points in one go, 18 appears paltry.

Heading into next weekend's Invitational in Columbus, both metagames are in flux. In fact, Standard appears to be going in the same direction as Legacy: pick a deck, practice the hell out of it, and leverage your knowledge over less experienced opposition. StarCityGames.com Invitationals, despite the split format, have often seen their top 8s populated by format specialists thanks to the 16-round format. A player can 5-3 or even 4-4 a format if they 8-0 the other, as Derrick Sheets found out in the most recent Invitational when he 11-0'd Legacy.

Ross Merriam is certainly an example of this, making the top 8 of an Invitational with Elves, but he also showed his prowess with Standard this past weekend. Dave Shiels, on the other hand, proved the exception to this rule. Typically a player much more comfortable with Brainstorm, Dave proved that simply being a great player might just cut it. Both players ride hot streaks going into the Invitational next weekend, so we shall see if their finishes last weekend in Providence will propel them to glory in Columbus.

For more details on #SCGPROV, read the coverage and watch the archived video of the events on StarCityGames.com: