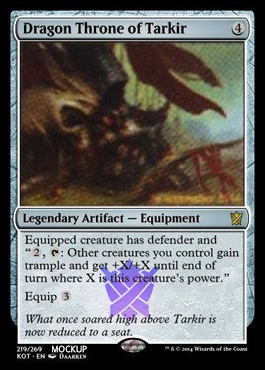 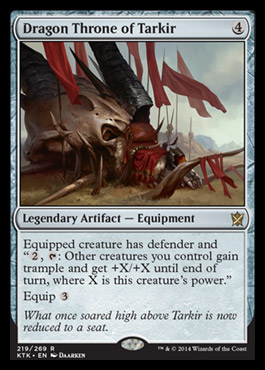 This is tagged "mockup" for some reason, but I've seen it on multiple credible sites and I have no doubt it's real. I'm not sure what's going on with the art, but that's likely why it's tagged "mockup"

The card itself is nothing to mock. This turns every big creature in your deck into a Craterhoof Behemoth. It turns a Craterhoof Behemoth into a double Craterhoof Behemoth. This card is ridiculously good in EDH where you have huge, durdly creatures and millions of tokens just waiting to grow and trample them. I don't know if this is good enough for standard unless Khans gives us a way to fart out of a bunch of tokens, but there are some scenarios where I could possibly see it.

You play a ton of soliders and get card draw triggers off of Ephara. When Ephara has enough devotion to turn into a creature, suit her up and go ham with soldiers.

Slivers isn't a deck, but that doesn't stop this from being sweet with Sliver Overlord or really any creature with 3 power or more you can live without swinging with.

A lot of this deck's sweet cards like Legion Loyalist will be gone, but Rabblemaster will still fart out tokens. Try tapping a Fanatic of Xenagos to give those tokens a bump.

Price-wise I have no idea. The fact that this is spoiled now and the art seems in flux makes me suspicious. I feel like this will be a promo of some kind, and that will hurt its upside. You can compare its price to that of the promo Moonsilver Spear if that's the case. This may be more playable, but that had just as much casual appeal and a ton of free copies of it lying around hurt its upside just as much. If this ends up a regular non-mythic, it could be a few bucks, but not being standard-applicable will likely hurt it.

"But you said it's good in EDH"

It's not as good as Deadeye Navigator and that's a bulk rare. Get foils of these cheap if you can, but if there is a promo, that hurts the foil's upside as well. This is a tricky card to predict. The one thing I do know is that Zurgo Helmsmasher's EDH deck wants a copy.

6 thoughts on “Khans of Tarkir Spoiler – Dragon Throne of Tarkir”