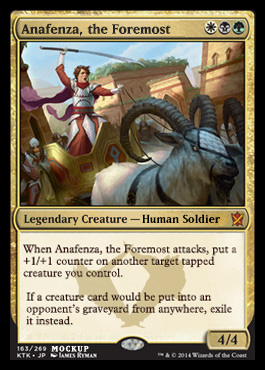 Jason introduced us to the Jeskai and Sultai khans, and we've already met the Mardu's Zurgo Helmsmasher, but I've got the fourth khan of the bunch to show you today:

Anafenza, the Foremost is reportedly a card revealed on MTG-jp.com, hence the English mock-up above, kindly provided by Mythic Spoilers.

So I'm not exactly sure what makes this particularly worthy of either mythic rare or legendary status (short of story reasons, of course). A 4/4 for three mana is a lot less impressive in a post-Loxodon Smiter world. Requiring a third color makes this much less efficient than its pachydermic counterpart, so its abilities must be better than Smiter's. 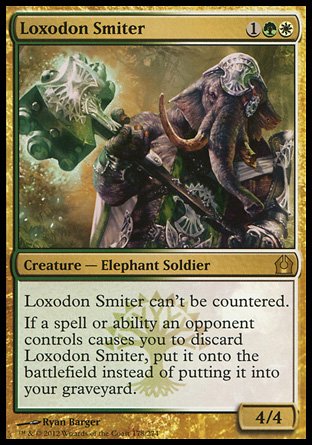 "When Anafenza, the Foremost attacks, put a +1/+1 counter on another target tapped creature you control."

I mean, this is cool. It can pump other attacking creatures, so aggressive decks will like this, although getting a three-drop requiring three different colors of mana out is not necessarily in aggro's wheelhouse. It can also pump tapped utility creatures, although that seems less important unless you're trying to get them out of burn range or something.

"If a creature card would be put into an opponent's graveyard from anywhere, exile it instead."

This isn't exactly exciting, but it might be relevant against delve and other graveyard shenanigans. It will certainly hose any kind of reanimator strategies that might pop up over the next 18 months.

I'm not saying this card isn't good, because it probably is. The stats are relatively pushed and the abilities are relevant if not awe-inspiring. But what an unexciting design. It just kind of mixes up card abilities we've seen in one form or another before, all on a creature that doesn't appear to have much of an identity.

Is this good enough for Commander? There will certainly be those who build this deck, but my first thought is that it's not splashy or powerful enough for a 40-life, multiplayer format. If this card has any financial value in the next year or so, it will likely be derived from Standard play. Whether than happens will depend very much on what decks are popular. Rest assured that the khans of each clan of Tarkir will be in the public eye, so we'll have an idea before too long.

3 thoughts on “A Junky New Commander?”