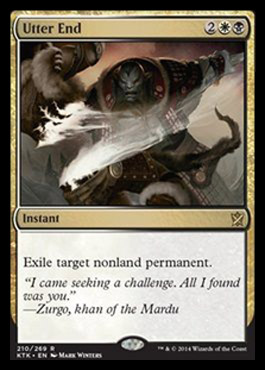 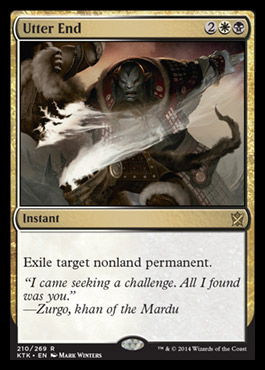 I don't know if it's worth it to make Vindicate cost 1 more mana if all you get is Instant speed and the ability to exile the permanent instead of just destroying it. You can't even hit a land.

OK, obviously this card is nutty. It's maybe a little nuttier than it appears at first glance. Pretend it says "Exile target creature or planeswalker". This is not quite as good as Hero's Downfall in that it costs 1 more mana, but if you think about the deck that is most likely to want it, it is closer than you may think. I'm thinking of this in terms of an esper deck. Now, obviously this block is wanting people to play this in Mardu or Abzan because those are the color combinations the block is supporting. If a deck materializes out of those colors, this gets played there. There is usually a good junk midrange deck so if Temur doesn't get all of the decent 4 power guys, this superior removal is likely there.

However, I think this will impact Esper the most. This is much more castable in Esper than Hero's Downfall is for a few reasons. First of all, we're losing Shock lands. Esper keeps more dual lands than most colors because Esper doesn't mind running out a tapped temple on turn 1 or 2 or both, and Esper is getting both Flooded Strand and Polluted Delta to fix its basics. Getting basics means you're going to want to not have to grab the same basic twice, so costing WB instead of BB is better since it doesn't force you to get two swamps in a deck that basically splashes black. You'll probably end up running some number of Hero's Downfall anyway, but that number may be 0. Since there is a 5 mana wrath that is very good, getting white on 4 and being able to remove a creature or walker is solid.

Additionally, this is more flexible than Hero's Downfall meaning it has more impact in a maindeck spot for a control deck, not forcing them to board in enchantment removal.

This card is nutty and if it hits $10 I won't be surprised. However, hitting that mark will require a lot of adoption. I don't think the new Sorin is good enough to build around, but in a planeswalker control deck that also has Elspeth, you can build a lot of color combinations. This is a removal spell flexible enough to be a 4 of and with a lot of hexproof stuff rotating, I am confident this will see a large amount of play. It likely doesn't replace Vindicate in Legacy, but a spell that would do that would make Standard no fun.