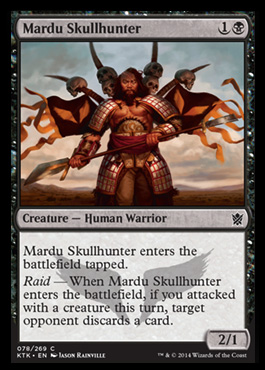 As of this writing, four cards have been revealed with the raid mechanic. Check them out below: 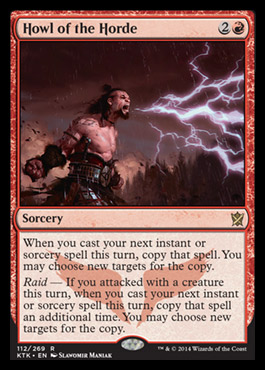 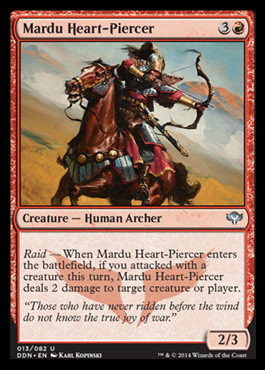 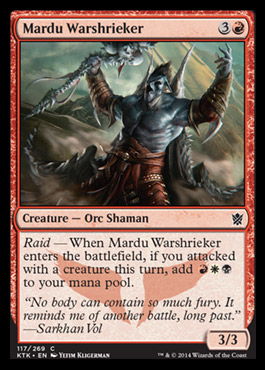 We're not seeing a ton constructed playability here, but each of these cards seems perfectly fine, if not actively good, in limited play.

First, a few words need to be said regarding the design of this mechanic. Many, many new players just can't seem to remember that a second main phase exists, or at least they don't understand why it might be wise to wait to cast spells until after combat. The raid mechanic subtly teaches players that waiting until one's post-combat main phase is usually the right way to play, and that's really cool. Granted, not everyone is happy about this, but you can't please all the people all the time.

Howl of the Horde is our first rare with raid. At worst, it's like a slightly-more-expensive-but-easier-to-cast Fork, except...oh, it's a sorcery. That makes it significantly worse than it might have otherwise been. Still, red aggro decks can close out games by suiciding in an attacker on turn five, then combining Howl with Lightning Strike (or the KTK equivalent) for nine damage at a cost of five mana and a couple cards. It's not insane, but there are possibilities.

I like Mardu Heart-Piercer. A 2/3 for four isn't great (you'd expect a 2/4 or a 3/3, in general), but an extra couple points of direct damage more than makes up for it. There will be times where you would love to get the damage before attacking, which limits this card's goodness, but it should still be solid for taking out utility creatures or finishing off creatures that blocked and didn't die in combat. Being able to go to the face for the last couple points isn't bad, either.

This already passes the vanilla test as a 3/3 for four mana. Its raid ability will be extremely dependent on whether you can spend the mana. I could see this card becoming sort of a trap—if you wait until you have a good spell to spend the mana on, the 3/3 dude might not be as relevant as if you had just played it on turn four. This card will be solid just due to its body, so consider the raid ability upside that doesn't necessarily need to pay off.

This is my favorite card with raid that has been revealed so far. We don't know how many one-drops will be in the set (or if any of them will be good enough to run), but this doesn't have to be played on turn two to be relevant. In fact, waiting until you can get the last card out of your opponent's hand may be the best use of this card in limited. In Standard, I would not be surprised to see this guy in the same decks that are running Gnarled Scarhide and Tormented Hero. It's a reasonable body that provides an easy two-for-one, so I'm on board with Mardu Skullhunter.

I think raid is looking promising so far for limited play. What do you think?

4 thoughts on “KTK Limited Focus: An Early Look at Raid”