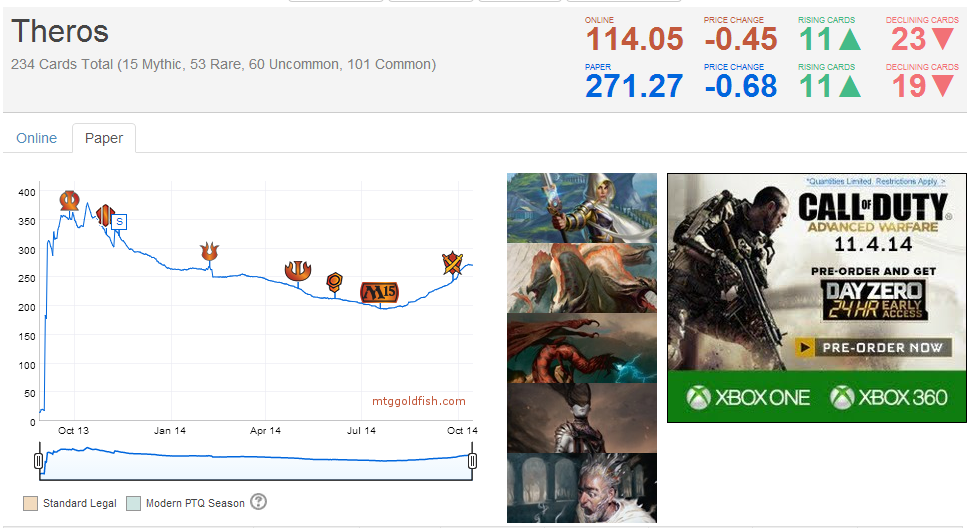 Last year, Anthony Capece wrote a fantastic piece for Brainstorm Brewery about the dangers of speculating on rares from fall sets. If you've never read it, go do so, because this was and is a groundbreaking piece of MTG finance content.

Earlier this year, I wrote a piece about long-term Standard trajectories (Insider subscription required), and one of the big takeaways from that article was that the highest price index for a fall set is immediately following the pro tour of the subsequent fall set (the exception being when the set is freshly released, due to lots of hype and lack of supply).

In general—I want to emphasize the in general part here, because individual cards will vary—this is the time of the year to be selling your cards. If historical patterns hold this year, and I don't see why they wouldn't, Theros cards are at their highs and will only decline over the next year until they rotate. There will be outliers, but most cards should follow this pattern.

We're also still in the high-hype, low-supply phase of Khans of Tarkir. Shock lands started about where the fetch lands currently sit, but ended up being universally under $10. Fetch lands are playable in more formats, meaning they might not drop quite as far as the shocks did, but they will go down. If you're not actively playing them right now, there's no reason not to sell your fetches and reacquire them later.

At this time of year, it's easy to ambitiously think that every card will maintain its price or even go up, but in most cases, it's simply not going to happen. Standard may seem exciting now, but it won't be long before the community is sick of mirror matches and a stale format. It happens almost every year.

There's a world in which Siege Rhino and Mantis Rider become the Thragtusks of this Standard season, defying the odds and maintaining high prices throughout the year. There's also a world in which they remain key players in the format, but due to being three-color, fall set rares, drop to a dollar or two and stay there, despite being format-defining cards. I'm leaning toward this second possibility.

The below chart shows that Theros cards are indeed at their high points since declining after the set's release. This is consistent with past years, and you can already see that they're starting to drop from that peak level, as happens with every set in the past several years.

If you have Standard cards you've been waiting to sell, now is the time. I've spent the last couple evenings preparing several buylist orders to go out, selling out of a huge portion of the Standard cards I've been holding or have opened since Khans of Tarkir was released. It's hard to stress too much how helpful Trader Tools has been in this process, and I highly recommend you use it to prepare your own buylists.

Or not. There's nothing really wrong with just holding the cards you want to play with, but be aware that you are leaving money on the table by doing so. This is fine if you're okay with it—but at least make sure it's a conscious decision.