Treasure Cruise is taking over Magic. There were 14 copies in the top eight of the Vintage tournament at Eternal Weekend, and there were 20 copies of it in the Legacy event. LSV has demonstrated how much the card tears up Modern in UR Delver. Article after article is being written about how much the card has warped eternal formats. It’s simply nuts.

And I love it. 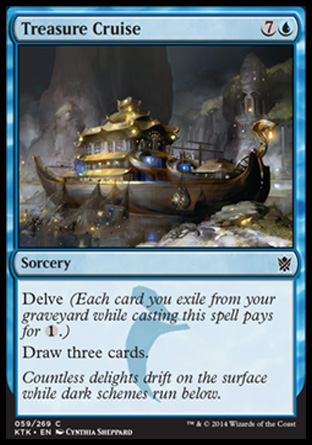 Drawing cards feels wonderful. Drawing three of them? For one mana? I’ve cast Ancestral Recall few enough times in my life that I could count them on one hand, but I intend to cast a whole lot of Treasure Cruise…at least until it is banned.

And it will be banned. Ancestral Vision is banned in Modern, so it would make zero sense not to ban this. Ancestral Recall is obviously banned in Legacy, but so is Gush. Treasure Cruise and Gush have slightly different uses, but without Fastbond in the format, Treasure Cruise is probably the more powerful of the two. Don’t expect it to stick around for long. 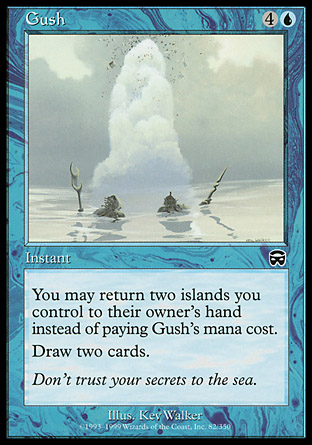 Everything I know about Vintage I’ve learned in the last few months from watching the Vintage Super League  and LSV videos, but it’s hard for me to believe the card won’t be restricted in our most eternal of formats. Maybe the format will adjust, but the fact that an outright ban is not the only option here leads me to believe that the DCI will play it safe.

Don’t get me wrong—I don’t want Treasure Cruise to be banned. I’ve gone on record as being a fan of Delver of Secrets and wishing it was playable in Modern. This has happened in a big way thanks to Treasure Cruise, and I’m not quite ready to give that up. But I also recognize that the format is being overrun with Delver decks, which is not as fun as them merely being competitive. Much as I love to cast it and would love to do so for a long while, I also recognize that the card is too powerful.

So expect a banning, and probably sooner rather than later. Star City Games is currently selling foils for $25 each. If you have any, get rid of them. If you’re a Legacy enthusiast and you love to foil out your deck, you may want to hold off, because that $100 will not end up being well spent. Want a foil copy for your cube or EDH deck? You could probably wait for the huge dip after the card is banned. Are you a rare paper Vintage player? Maybe only picking up one copy is the right call for you. In my opinion, you’d have to be very reckless to be picking up foil Treasure Cruises right now. Save your money, because this price won’t last—just like the card won’t last in your favorite format.