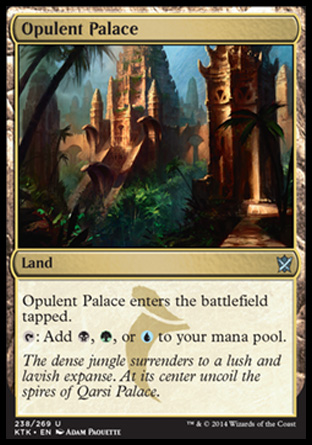 Thanks to everyone who participated in the Quiet Speculation Sealed Contest. We got a lot of great entries (and a few pretty bad ones, too). Most entrants identified Sultai as the guild to be in, but the builds varied from black-green splashing blue, green-blue splashing black, solid three-color decks, Sultai decks trying to jam Sarkhan, the Dragonspeaker and Savage Knuckleblade, and a five-color deck. 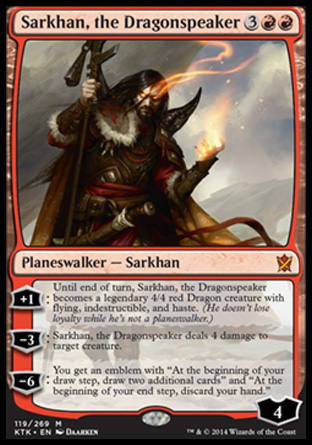 I was very much hoping someone would figure out a good way to play Sarkhan, but there just wasn't enough red support to make it happen. Given the lack of red playables, nobody tried to build a deck with red as a base color. Sarkhan was very much a trap, and I was pleased to see that most entrants avoided it. A couple people tried to splash it (one with only three red sources), but splashing double-color cards is almost always wrong. For the record, if someone had managed to fit Sarkhan in a deck with a good curve and reasonable mana, that probably would have won this contest. The fact that no one did indicates to me that Sarkhan was truly just unplayable here.

Without further ado, congratulations to Chris B. for his winning list:

My only major concern with this deck is the mana base. The deck only has seven black sources and eight green sources, and I would have liked to see one more of each of these colors, especially black. There are four blue sources here to splash Sidisi, Brood Tyrant, Sultai Charm, the face-up version of Abomination of Gudul, and two Treasure Cruises. Four blue sources might be okay considering these are mostly late-game cards, but five would have been ideal. Basically, Chris needed a second Opulent Palace to really perfectly fix his mana.

Besides that, I think this deck has an excellent curve and the mana is only iffy, not disastrous. I would have cut a blue card or two, replacing an Island with a Swamp or Forest. This would make the blue a very light splash and add some consistency to the deck.

Thanks should go to every entrant for their decklists and comments. I legitimately learned some things about the format from this exercise. Andrew T. (among a few others) pointed out that even though we're not splashing white, all the delve cards mean that Windswept Heath should definitely be in the deck. That was not my first impression, but his argument was good enough that I do think Heath should be run over a Forest in this build.

I generally don't like Kheru Bloodsucker, especially without Act of Treason in my deck, but with Swarm of Bloodflies, double Sultai Flayer, and lots of delve, I could see one copy reasonably making this deck, but running both copies in this pool was pushing it. 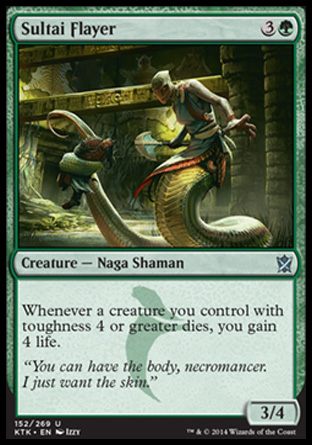 Exactly zero people submitted a white deck, which isn't entirely surprising given that there were only five playable mono-white cards in this pool. However, all five of those cards are quite good and the fixing for white is phenomonal between the Windswept Heath and three Blossoming Sands. I wouldn't have gone white, but I'm kind of surprised that zero people did.

Generally, I think people avoided the traps in this pool admirably. The vast majority of entrants submitted Sultai decks, which I agree with. However, between Sarkhan, Big Knucks, and some powerful fixing, I was expecting to see more varied colors among the lists. Kudos to everyone for identifying the consistent strategy and avoiding the distractions. Thankfully, all the Sultai decks were pretty different, so I wasn't trying to choose a winner based off of one or two different cards.

Once again, thanks for your entries and comments! Perhaps we'll do this again one day. If you think you have a better build, post it below!