I want to show you something: 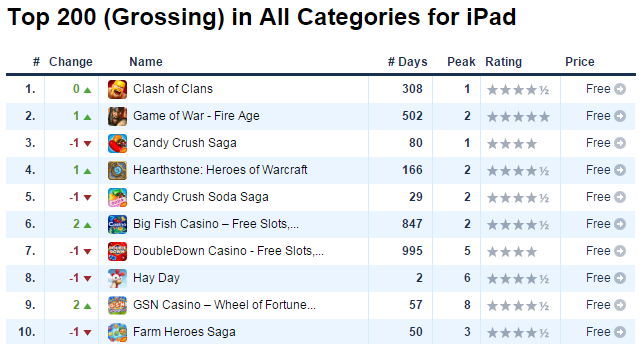 These are the most recent top-grossing apps for the iPad. Note that every single one of them is downloadable for free—yet they still make more money that anyone else! Notably, Hearthstone is on the list, showing that a user-friendly and fun digital trading card game is capable of performing in a big way in this mostly casual market.

Magic Online, on the other hand, charges $10 just to create an account. Yes, this comes with an annoying, irremovable, and mostly useless pile of gold-bordered cards and some tickets to play in phantom new player events, but the fact remains: you have to pay to create an account. And this is even before you find out that there is no tutorial!

Of course, Wizards of the Coast will argue that Magic Online is not for the casual gamer—that's what Duels of the Planeswalkers is for. I recently documented my great fondness for the DOTP series, but here we run into the same problem: it costs $10 to download. Essentially, there is no way for a vaguely interested gamer to try out a WOTC-sanctioned Magic product without giving the company an initial $10.

Frankly, I shouldn't really care that WOTC is leaving large amounts of money on the table. But because I want the game to be healthy, resource-driven, and well-known in popular culture, I do care.

We all know that Magic is addictive. I don't generally just do one draft and walk away. Instead, I'll do a draft, lose a close one in the finals, and simply need to go at it again. Maybe I'll win this second draft. Well, that just pumps me up for more! If you were to look at the dates and times of my drafts, you would find that they usually come in bursts of five to ten over a few days.

Wizards of the Coast needs to have more faith in Magic as a product. It seems like the company is afraid to let folks play any amount of games for free, probably for fear that those people won't spend any money on further Magic products. But we all know this isn't true. DOTP is only going to be satisfying for so long, and then players will want to build their own decks. This leads to purchasing Magic cards, either digital or paper. It leads to event attendance and website visits. It leads to recommendations to friends.

If I was in charge of such things, I would be shoving Magic in people's faces at every opportunity. Free download of Duels of the Planeswalkers? Absolutely. Not all the content has to be free, but the initial fee would be gone in a heartbeat. Haven't played Magic Online in more than 30 days? Let's send you an email alerting you to a free Cube draft added to your account! Better use it quick—it expires this weekend. Half-price events during unpopular hours? Seems like a good way to encourage people to play. Promotional rewards for in-game achievements? Casuals would love it.

Magic Online is completely bereft of these features. The program offers virtually worthless rewards for esoteric actions, doesn't indicate why or how you received those rewards, and doesn't even make a fanfare of putting them in your account. There's nothing to do during the copious amount of waiting time. There's no ability to play meaningful games quickly—either you play casually or you play for at least three hours!

Giving away digital cards and event entries doesn't cost WOTC anything except for potential lost revenue. But considering just how addictive Magic is as a game, isn't losing a small amount of revenue well worth the chance of hooking someone who had moved on to other things?

Free-to-play games have shown their ability to make much more revenue than traditional one-time purchases. Duels of the Planeswalkers and Magic Online are both perfectly suited to this pricing system. So why are these programs stuck in the past?