I'm on vacation, but that hasn't kept me from drafting the Holiday Cube ten times. I'm currently 24-6 in the format, which is a great improvement over my more recent win percentage, which has been sliding ever since we moved on from triple Theros. Maybe I'm just getting lucky, but I like that better than losing.

Anyway, of those ten drafts, three decks have been mono-red. At least, this one was basically mono-red: 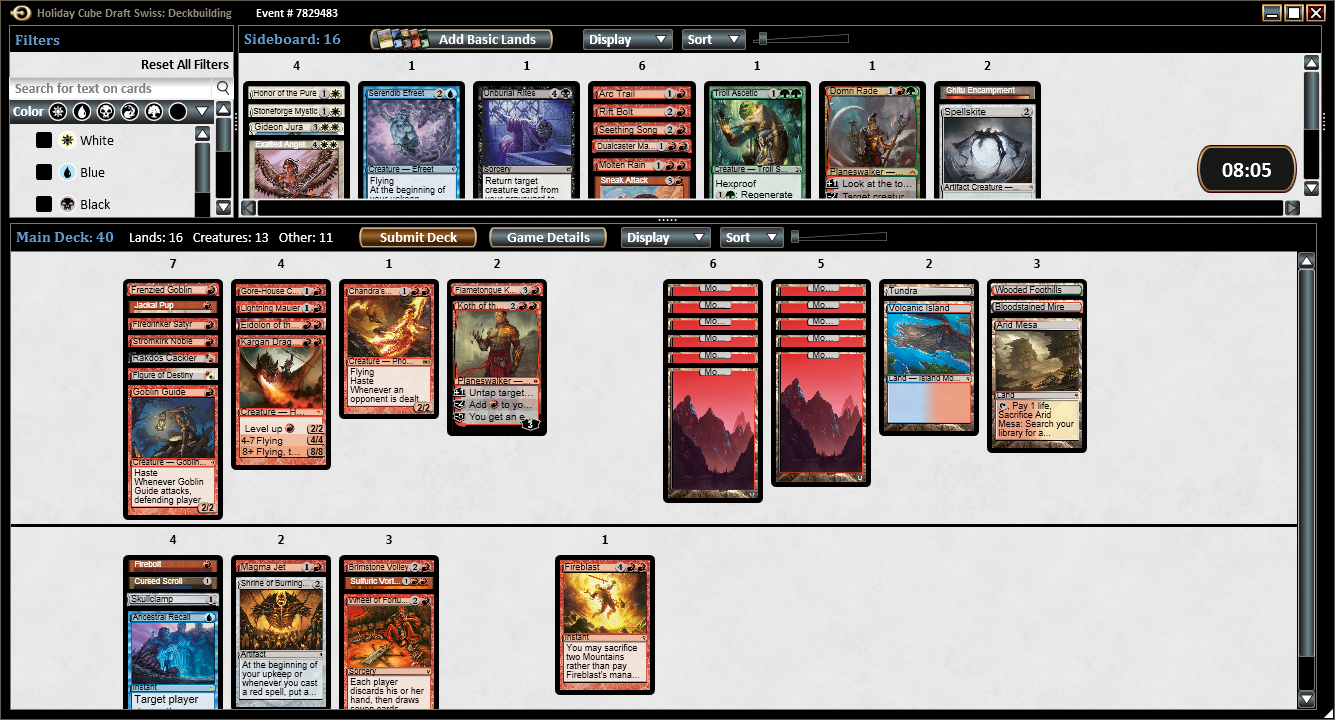 I've been thinking for a couple weeks now on what the "perfect" mono-red deck would look like, but I'm talking legitimate mono-red—the blue splash would disqualify this deck in my mind (artifacts and hybrid cards are fair game, though). Earlier on the night of this writing, I drafted an actual mono-red deck that started off sweetly enough to garner this tweet:

I'm hard-pressed to imagine a better first five picks for mono-red in #HolidayCube (sans Ruby or Lotus, of course) pic.twitter.com/VltPF6UmBZ

I believe it's generally accepted that Goblin Guide, Shrine of Burning Rage, Sulfuric Vortex, Koth of the Hammer, and Grim Lavamancer are the reasons to be mono-red, so to pick up four of those five cards plus arguably the best equipment in Magic in the first five picks was quite nice. The deck ended up like this: 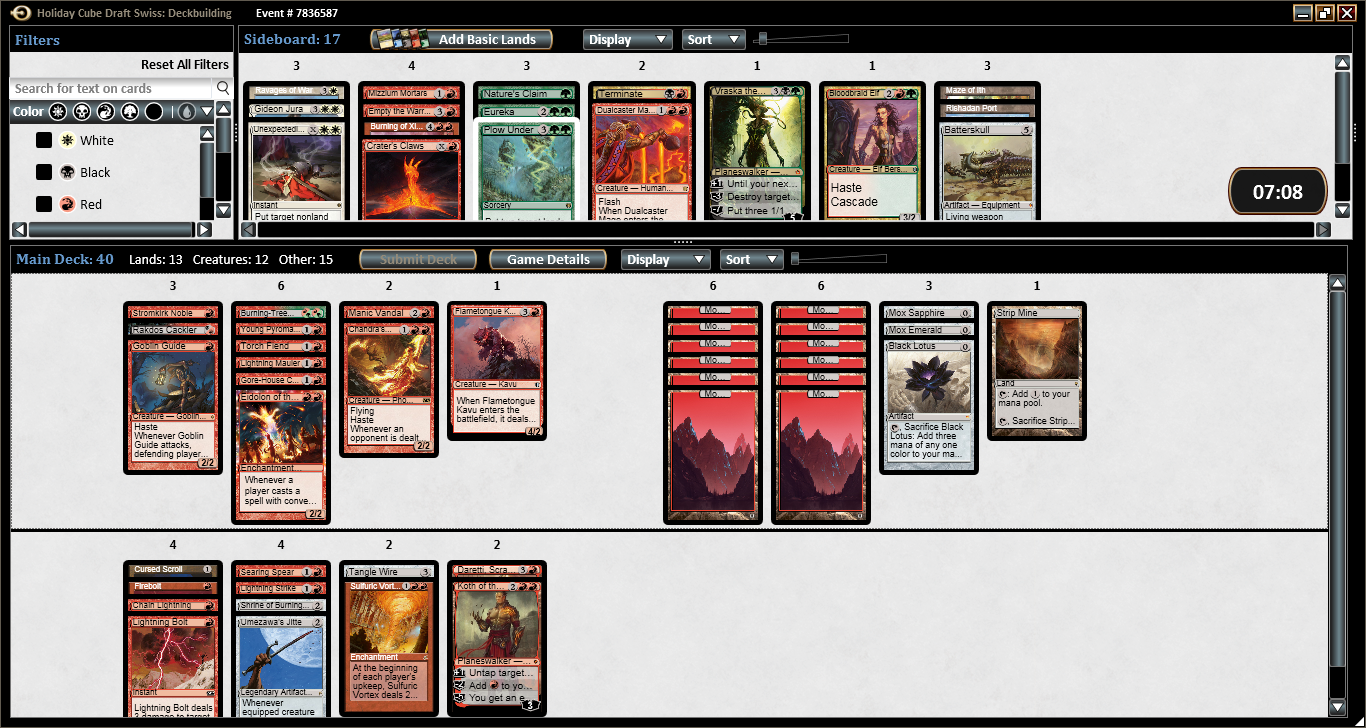 I didn't get the Ruby, but I did get the Lotus (and the Sapphire [and the Emerald]). It was pretty cool.

Anyway, neither of these decks is perfect. Drafting the perfect mono-red deck may be possible, but it's pretty unlikely, so trying to determine what would be the best mono-red deck is merely a thought exercise, although it can make you a better drafter of the archetype. Even if it is just a thought exercise, I like thinking about Magic, so let's do it. And to be fair, if you're the only one drafting red aggro, there's not many people fighting over these cards with you.

Let's start with one-drop creatures. Goblin Guide is clearly the best of the best. I like Figure of Destiny and Rakdos Cackler next. If you're going for the ultra-low curve mono-red build (and why wouldn't you be?), you probably want about three other one-drops. I like Stromkirk Noble just fine, and Firedrinker Satyr is decent. Grim Lavamancer isn't as aggressive as these others, but it's one of the best cards to get for the deck, so it's the obvious answer for the last one-drop slot. A super-aggressive deck could have more than six one-drops, but it's hard to imagine a "perfect" deck containing Jackal Pup, Frenzied Goblin, or Goblin Vandal, so let's say six is ideal.

For two-drop creatures, I consider Eidolon of the Great Revel and Kargan Dragonlord the ones you most want to have. Old Standard buddies Lightning Mauler and Burning-Tree Emissary are powerful and go well together, but unfortunately, Emissary doesn't cast either Eidolon or Dragonlord, so to include it, we need a couple more castable cards. Gore-House Chainwalker works and is surprisingly good as a three-power two-drop, as is Borderland Marauder. We'll have some non-creature plays that are good with Emissary, too, so I do think it provides enough value in the deck despite the best twos costing RR. You might be wondering about Young Pyromancer, and it's certainly fine filler in mono-red, but these decks usually have no more than five instants or sorceries, so Young Peezy is not a premium card like it is in blue-red builds.

The three-drop slot is an interesting one for mono-red:

Frankly, I don't think most of these are playable. I don't know why Magus of the Moon would ever be anything but dedicated multicolor cubes, and Prophetic Flamespeaker strikes me as a best-case-scenario-mentality trap (although it gets better with multiple equipment cards in your deck). Imperial Recruiter can add some utility to red decks, but a three-mana 1/1 is nowhere near where I want to be in an aggro deck. Dualcaster Mage is closer to playable than these other three, but even if you have a ton of burn, it requires more lands than you really want to have on board to live the dream with this card. Cards that make me hope to flood (or just raise my curve) are not what I want in red aggro. Guttersnipe is similar to Young Pyromancer in that you don't want in mono-red, but worse. I've never put the card in a deck.

The other three, Chandra's Phoenix, Manic Vandal, and Boros Reckoner are the three-drops I would be happy to have in my deck. I like Chandra's Phoenix probably more than most people: it holds equipment, attacks right away, is usually the only flyer in the deck, and offers a bit of card advantage with its recursion ability. Manic Vandal overperforms in powered cube, though it can get stuck in your hand due to the mandatory nature of its ability. I like Boros Reckoner the least, as it's slow, but  it's a brick wall against aggro. We're going to top off the curve at four for this deck, so I only want two three-drops in my "perfect" list.

As for four-drop creatures, there are only four in the cube, and Hellrider is where I want to be. Hero of Oxid Ridge is a worthy replacement if one doesn't snag Hellrider, but I like being able to attack my opponent and kill his planeswalker. Flametongue Kavu is certainly playable in aggro, but I like it better in multicolored midrange decks. Finally, Avalanche Riders is a fine sideboard card against greedy decks, but I almost never start it.

I'm realizing now that this topic is larger than I can cover in just one article. Come back tomorrow for a quick summary of the creatures in the deck and detailed coverage of the best spells to grab. If you have comments on the creature selection here, please share!