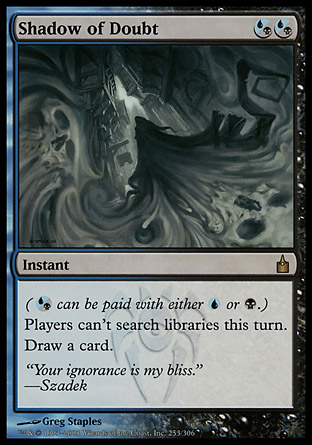 Unless you've been living under a rock, you've read all about the banned and restricted list update. If you have indeed been living beneath stone, check out Jason's article complete with commentary on every change. You can also see the official announcement here. All caught up? Good.

So Birthing Pod is gone from Modern. In many ways, this means that it's gone from Magic completely. It's no longer in Standard. It's banned in Modern. It's a fringe playable in Legacy, at best. And it's not what Vintage players want at all. I've only ever seen one Cube deck run it, and that was more of a Recurring Nightmare build than a Pod list. I've also never particularly seen it run to good effect in Commander. Birthing Pod is a build-around card, so it just doesn't do that much in singleton formats.

In effect, this banning basically wipes Birthing Pod from the Magic map. Sure, it will still see a little casual play, and maybe Pod enthusiasts will turn their sights to Legacy and see what can be done there, but for the most part, we're looking at a brave new world the likes of which we haven't really imagined since May of 2011. Banning Pod is a huge shakeup.

To be fair, I'm not necessarily saying it was wrong. Pod has been among Modern's top two or three decks for years now, and though I don't personally play enough Modern to say whether it was oppressive at big tournaments, one of Pod's foremost experts seems to agree it was correct: 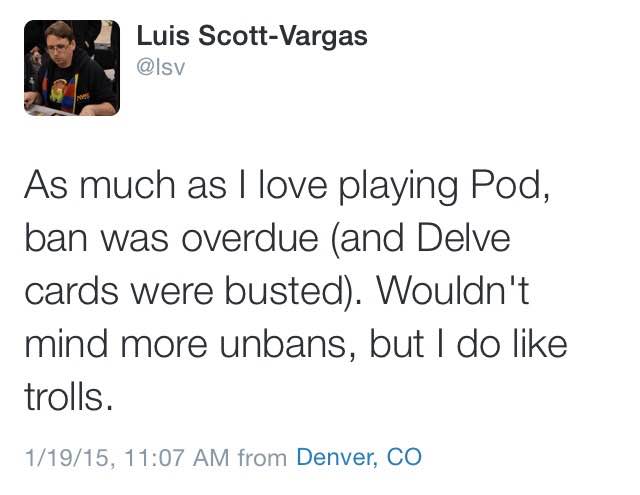 Of course, what this does for the Modern metagame is only half the story. The other half is the fact that many players have had significant investments of time and money that are no longer relevant in the competitive Modern scene. It's stories like these that indicate the biggest risk involved with world-shaking bannings like that of Birthing Pod: 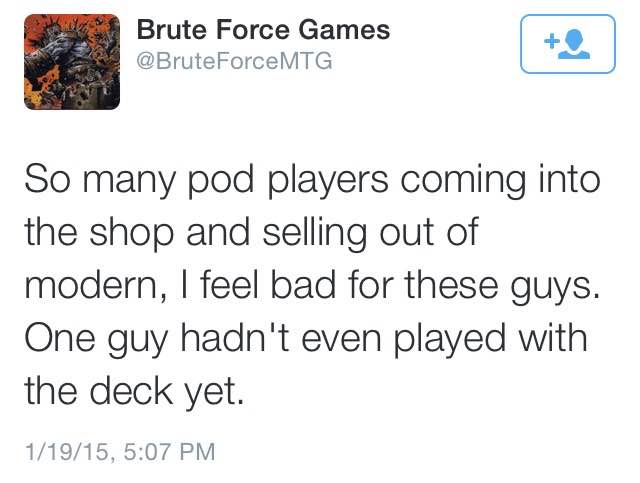 The appeal of eternal formats is that one can build a deck, updating it with each new set but largely forgetting about it except when a tournament comes up. Pod players, many of whom have been playing the deck for years, learned this week that Modern doesn't work like Legacy in that way. One can invest the money to purchase a deck and the time to become an expert at playing it, then have the rug pulled out at a moment's notice.

As a fan of Modern coverage, I personally like the Birthing Pod ban. I've seen the deck played so many times that it just wasn't even interesting anymore. I played a couple events with Melira Pod back in the day, but it wasn't really my jam as a player. My biggest regret is that because Pod is only really good in Modern, its legacy on Magic has been pretty much wiped away with this move. Unless and until Pod is unbanned, we really won't be seeing it around anymore.

But it's the consumer confidence in Modern that concerns me most. I've been toying with the idea of building a Modern deck on Magic Online, but that seems much less attractive in the face of such major changes. Many players will undoubtedly feel the same.

Of course, the timing of such a massive change is more or less perfect. It will shake up the Modern pro tour significantly, which will make for a more entertaining weekend and offer many opportunities for MTG financiers (speaking of which, if you're not already an Insider here at Quiet Speculation, the days leading up to the pro tour are a great time to give the service a try). I'm all about a more entertaining pro tour, although to be fair, I would have been pretty entertained by watching Dig Through Times resolve all weekend.

The other aspect of the timing here is that we are only a few months away from Modern Masters 2015. We know that the print run will be larger but still limited, but we don't know how much larger it will really be. To me, the banning of Birthing Pod indicates that Modern Masters 2015 will have a significantly larger print run than its predecessor.

Banning Birthing Pod was likely viewed as a dangerous but necessary evil by the DCI. As LSV said in the tweet above, the banning was overdue. Wizards of the Coast knew that it would anger a portion of the playerbase (while being happy news for another portion), so the company chose the moment wisely. What better way to help players get over their anger at a banning than to widely release a badass set that will make Modern more accessible (and hopefully more affordable) to new players and spurned Pod players alike?

Of course, the $10 MSRP makes it less likely that this set will really drive down Modern prices. If the first Modern Masters is any indication, these packs will realistically sell for $15 to $20 each, and I hesitate to imagine how good a set would have to be to make such a booster pack price worth that cost. Still, new copies of cards will enter the market, and players selling them after drafts will put some downward pressure on prices.

But the real question is this: will MM15 be enough to regain Birthing Pod players' collective trust? All we can do is wait and see.

24 thoughts on “The Dangers of Banning Birthing Pod”