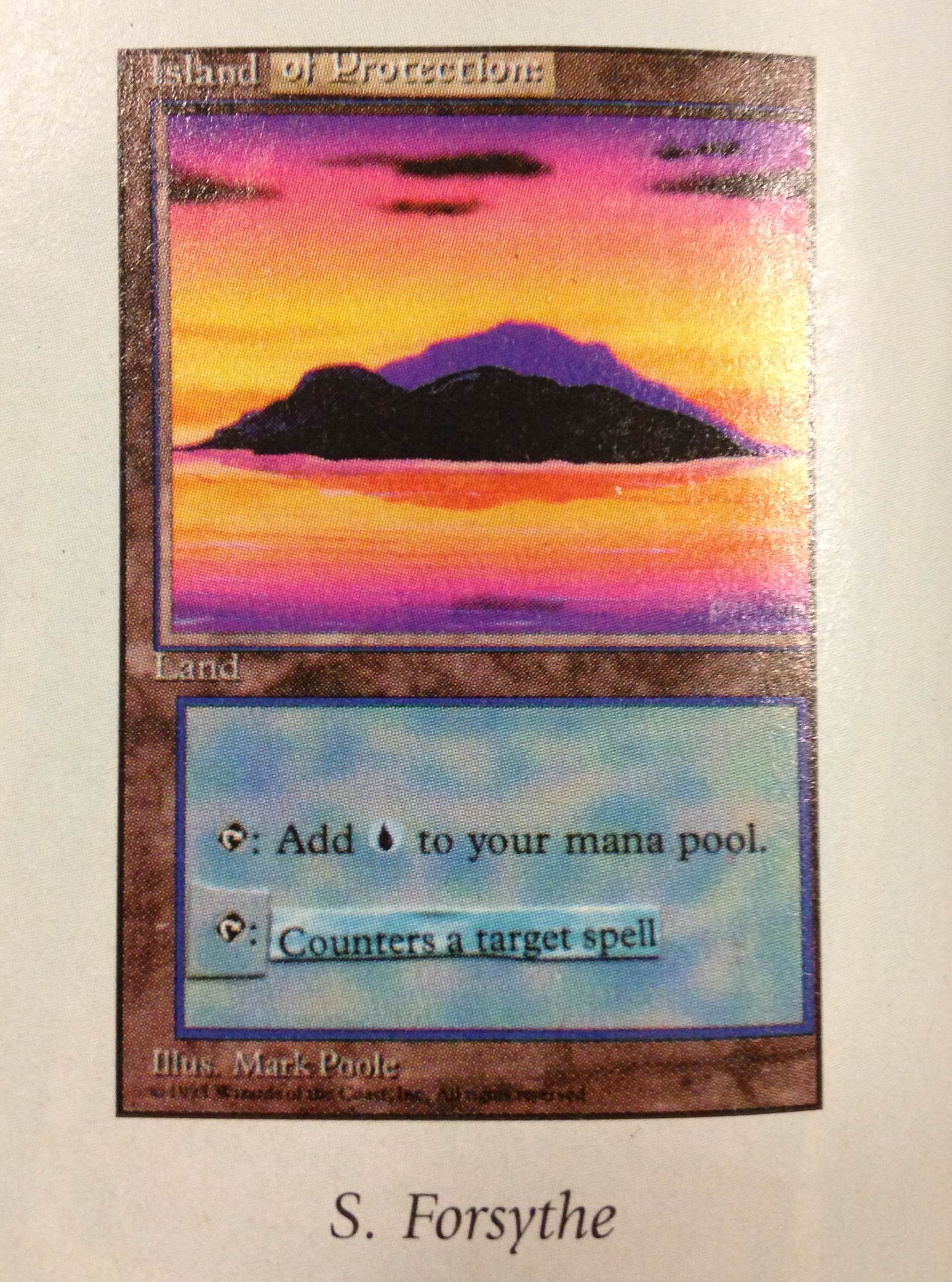 I recently attained some copies of old MTG magazines. For those of you who grew up with Scrye, Inquest, or The Duelist, you understand the nostalgia involved here, but for those of you too young to remember paper magazines, allow me to explain. You see, back in the day, we didn't have Daily MTG or Quiet Speculation or basically any Magic websites at all. We certainly didn't have easy access to pricing through Trader Tools, TCGplayer, or whatever. What we had were monthly magazines, and they were glorious. They had price guides and articles, the same thing you're used to now, except that we only got them once a month, so they were about 30 times as special as the articles you read on a daily basis (not to downplay my efforts too much or anything...).

I'm going to be writing up the periodic post about what I find in these old magazines, so let me know: what do you want to see? Old articles? Decklists? Pricing? All of the above? Misconceptions about how good a bad card is or how bad  good card is? Typos? There's some great comedy and historic gold in these pages, but there's so much of it that I need to know what you, the readers, want to see. Tweet at me or let me know in the comments.

Today, let's take a look at some of the awesomeness contained in Scrye #10, published in 1995 (but oddly, without a publication month apparent anywhere in the issue). 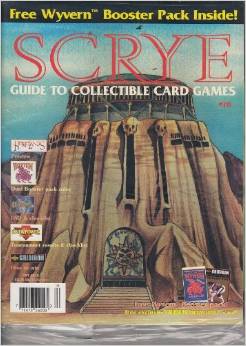 First, let's take a look at how MTG finance worked in the early days of the game. 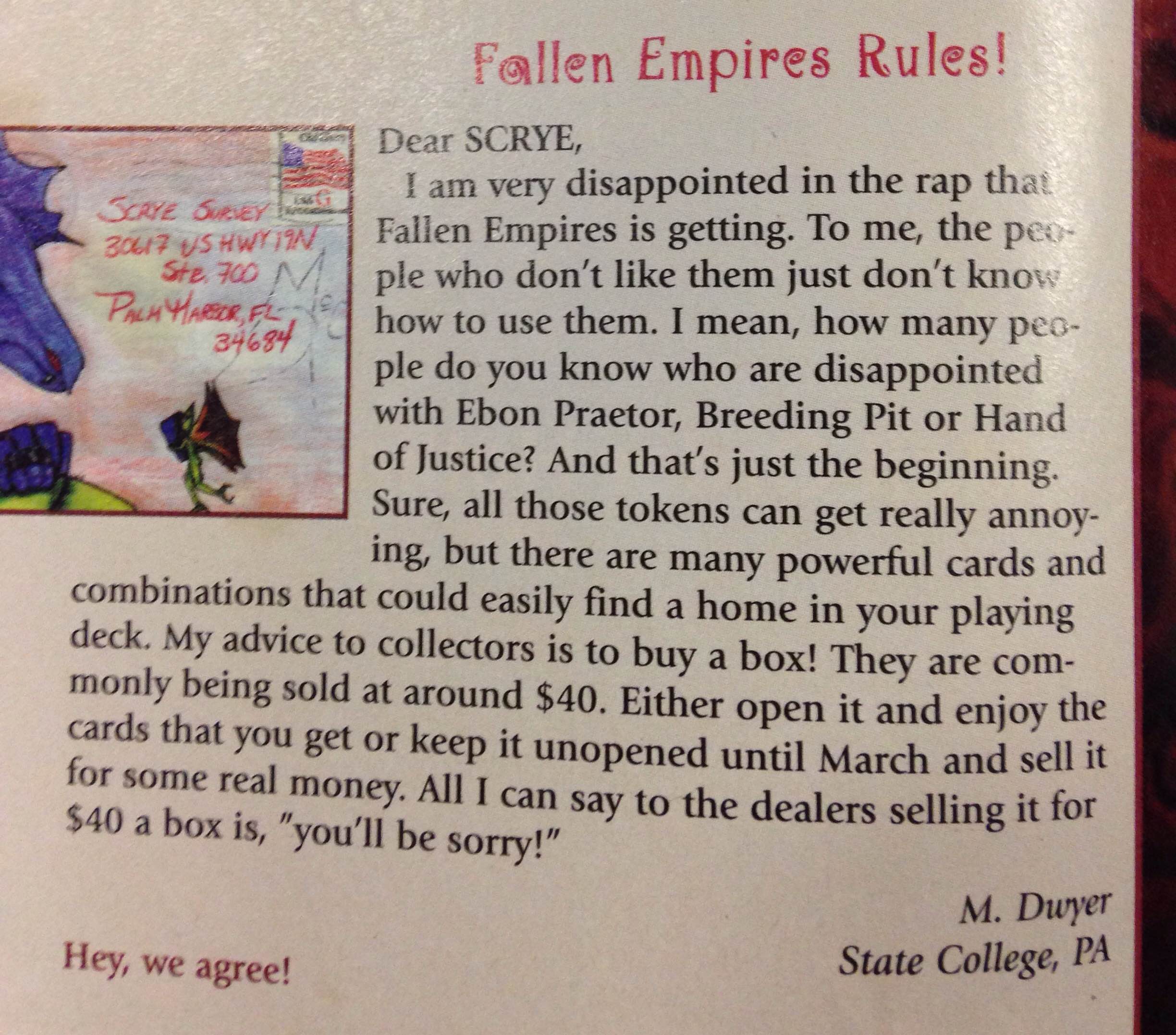 Have you heard of any of the cards M. Dwyer called out? I have not, but let me tag them for you here: Ebon Praetor, Breeding Pit, Hand of Justice.

I have to admit, Ebon Praetor has some fantastic art, and I am quite sure I've never seen the card before now. On the other hand, I did remember Breeding Pit once I saw the art. If Dwyer liked this, I wonder what he thinks about Awakening Zone! Hand of Justice... meh.

As for the advice to buy Fallen Empires boxes for $40: this was obviously correct. I mean, it is a 20-year-old set, but take a look at the current eBay listings! A clear double-up opportunity was missed by all those stupid dealers who didn't want to hold their boxes. 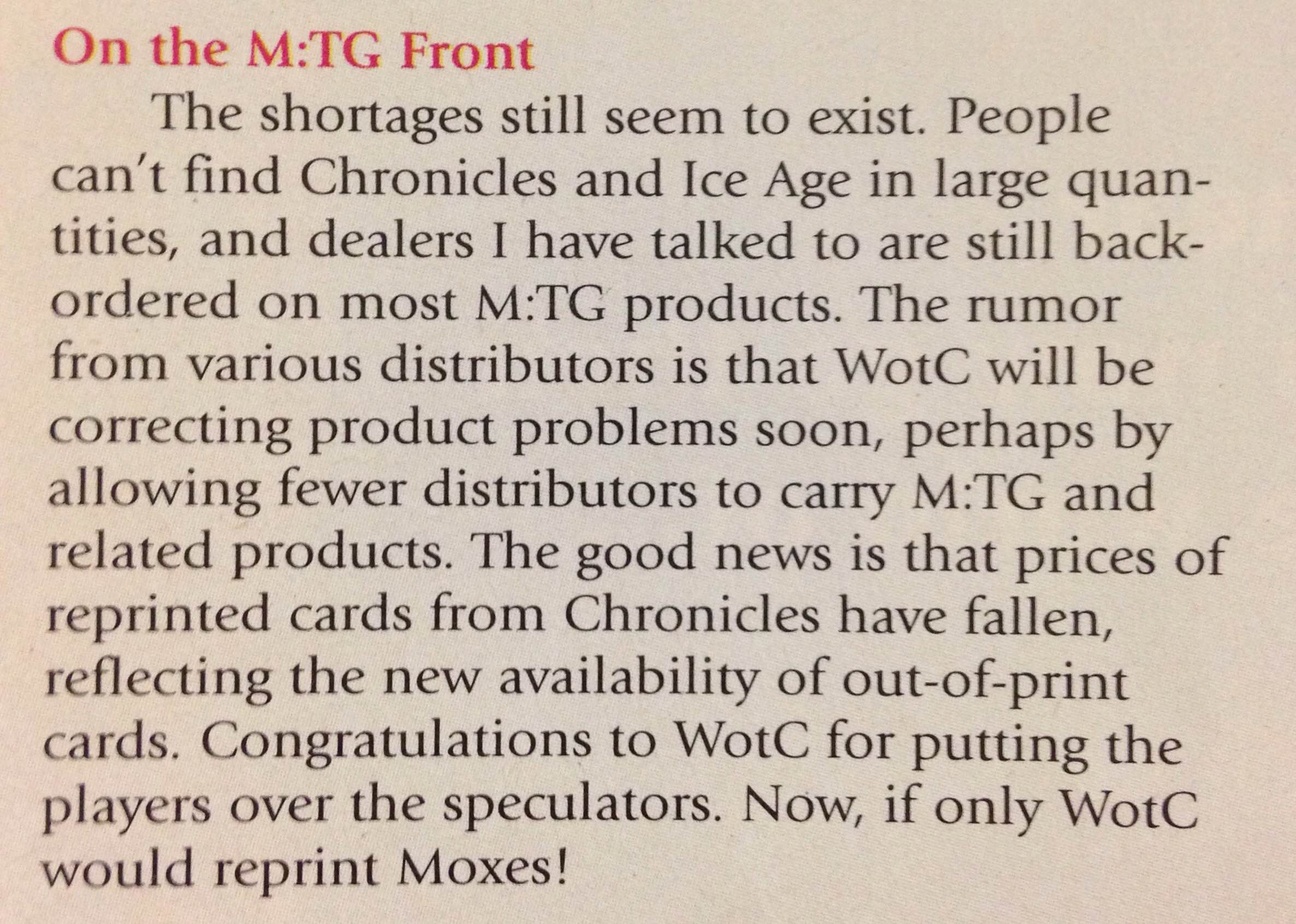 This is interesting for two reasons:

1. Even back in 1995, people were complaining about speculators being more important to Wizards than players. Some things never change.

2. Chronicles and Ice Age were two of the most overprinted sets in history. Their cards are worthless today because there are so many in existence. Yet Scrye was talking about shortages. It just goes to show how misperceptions, misinformation, and rumors can impact the game.

The issue featured some awful custom card designs, with this one taking the cake:

I, for one, am glad that Aaron got the WOTC development job over his brother, Steve.

And then we have prices. The price guide itself is interesting, but I'm ignoring that for the advertisements. Seeing what "deals" some places were offering is pretty insane: 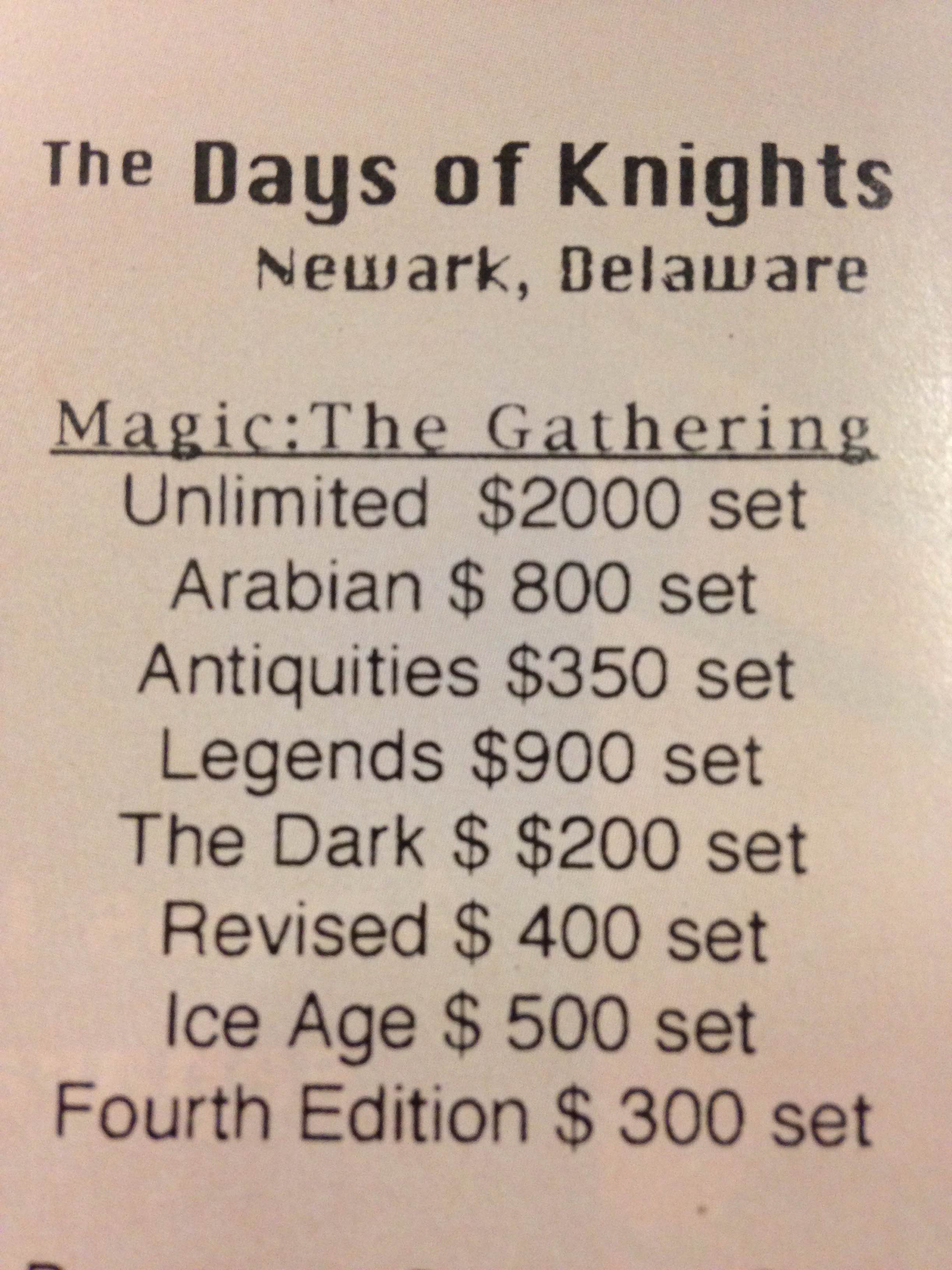 What do you think? Would you rather buy a set of Revised for $400 or Ice Age for $500? Maybe an Antiquities set for even less?

Take a look at what Ice Age singles were going for: 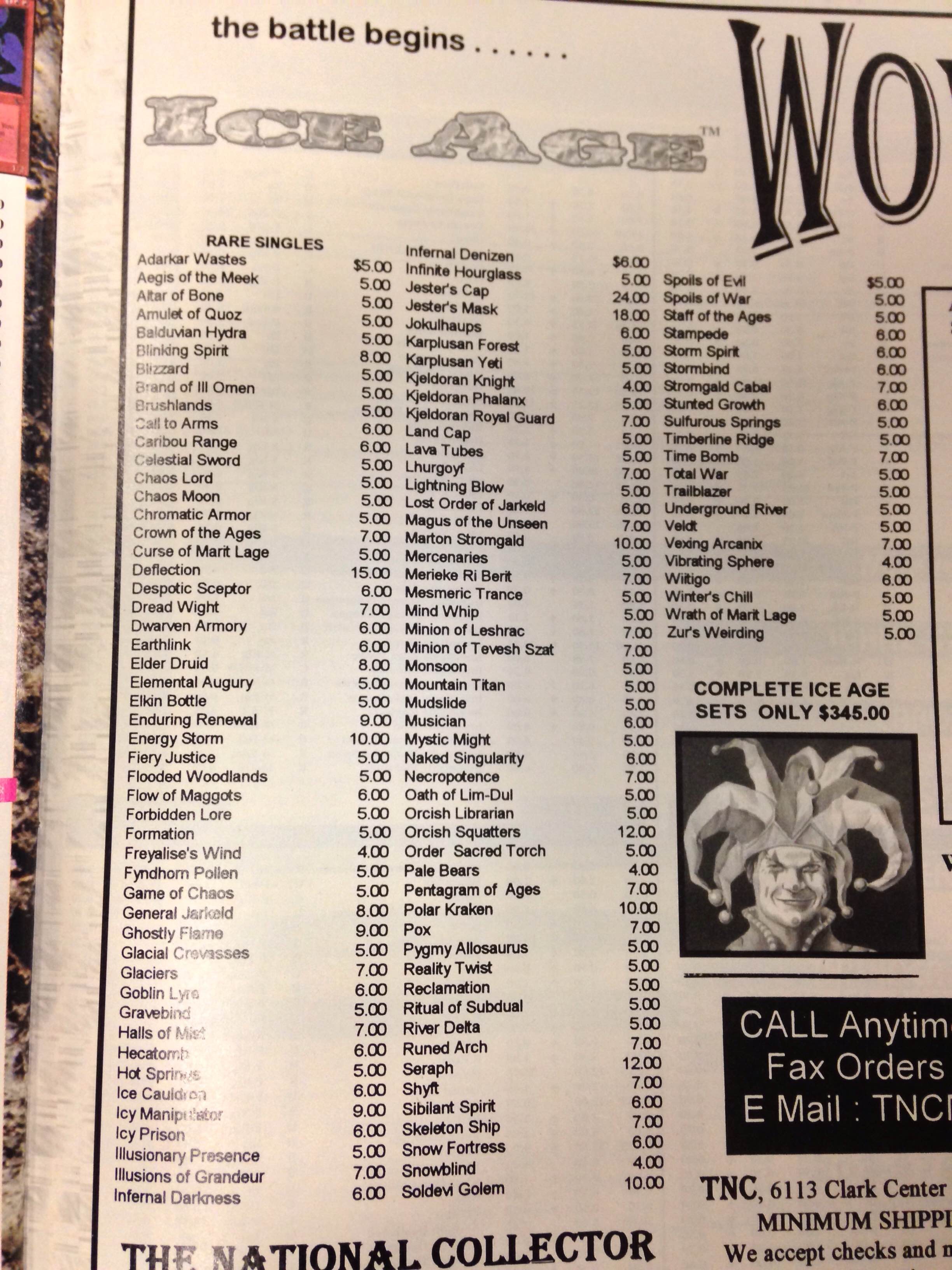 Icy Manipulator is an uncommon, but nobody knew which cards were which rarities, so they have it listed here as a rare and for nine dollars. Jester's Cap was the most expensive card in the set, selling for $24. 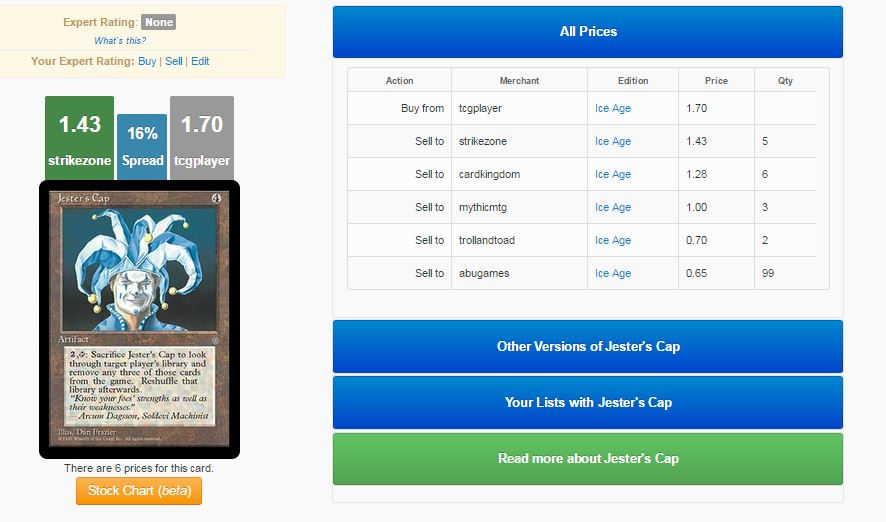 Meanwhile, Necropotence, the set's clear winner as far as power level, is sitting at only $7. Go figure.

Here's some more crazy prices from a different store: 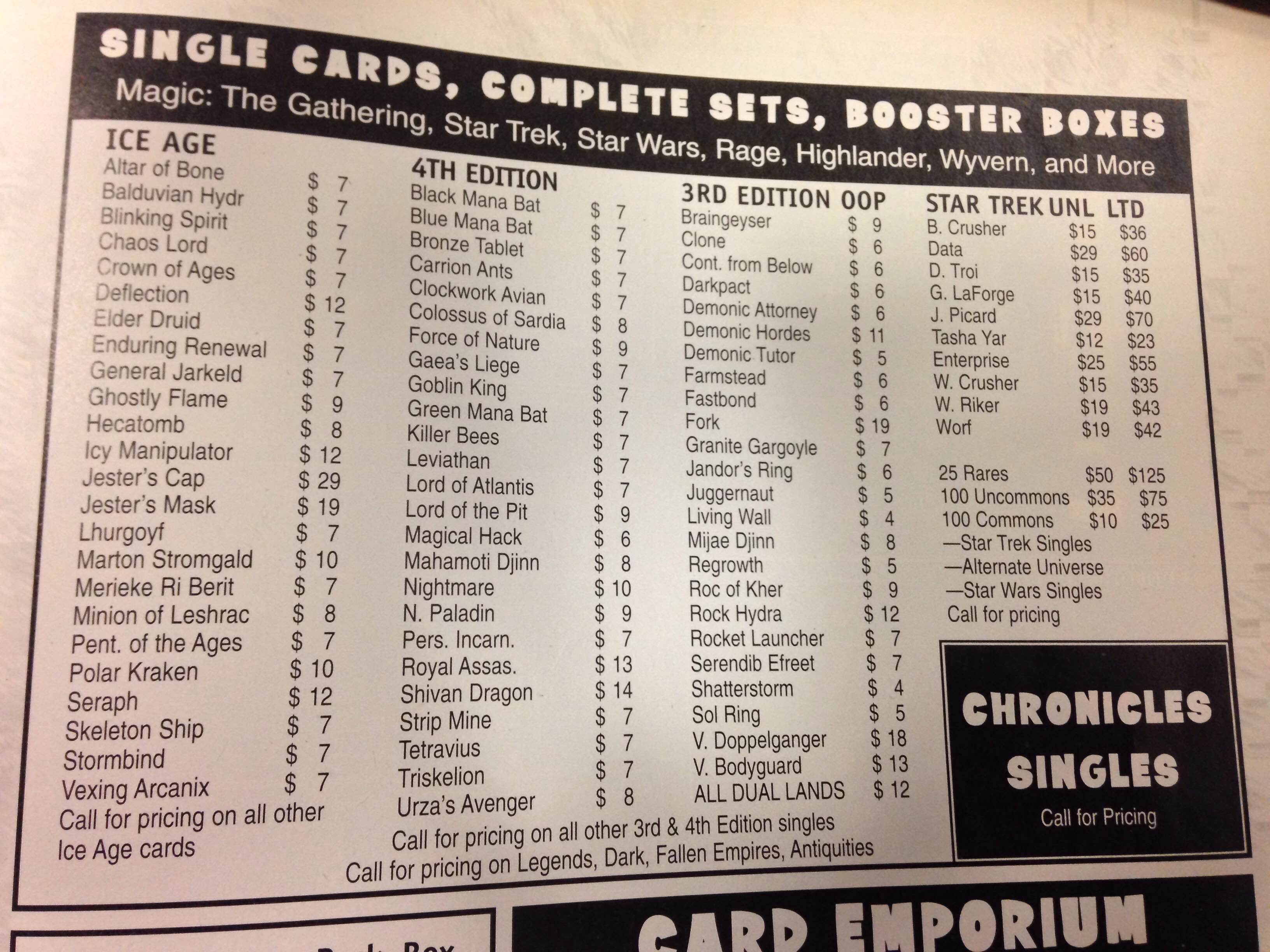 Yes, Fork was the most expensive card in Revised. Look at all the bad cards that cost more than Demonic Tutor. Did nobody know how to evaluate cards or what? And this shop is selling Icy Manipulator for $12! The craziest part about this list is that many of these cards are straight-up bulk now. People talk about how Shivan Dragon was the most expensive card back in the day, but here we see it illustrated. People, Sylvan Library was in Fourth Edition. It's not even listed here!

I could probably write another few thousand words on all of the information we could glean from this issue, but I'm going to leave some of the greatness for y'all to pick out. Comment below with your favorite observation from these photos. And again, let me know what you'd like to see from these old magazines! This is but a small sampling of the hilarious nonsense and interesting history I found in this issue, and I've got a bunch more to go through. Until next time!