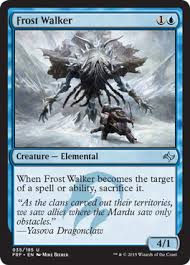 Temur strategies saw some fringe success in pre-Fate Reforged Standard, but the deck always felt like it was a little lacking. Savage Knuckleblade is a very powerful card, but it was a little shy on proper support until Fate Reforged launched. This weekend Jacob Eckert Top 8’d the SCG Premier IQ in Indianapolis with a very strong take on the deck.

Flaemwake Phoenix and to a lesser extent Shaman of the Great Hunt add some extra punch to the deck, but the real story here is arguably Frost Walker.

It’s difficult to overstate the power of a two-mana 4/1. While it technically has a drawback, very few decks are willing/able to target Frost Walker with spells that wouldn’t kill a one-toughness creature anyway. Frost Walker is an absurdly efficient way not only to beat down, but also to “turn on” Crater’s Claws and Flamewake Phoenix.

Earlier versions of Temur had difficulty keeping pace with Siege Rhino, but this build looks like it mitigates a lot of that problem. The extra fliers and a critical mass of four power creatures enables the deck to push through dramatically more damage.

Gruul Aggro was considered a better deck than Temur prior to Fate Reforged, but that could be changing. Savage Knuckleblade, Frost Walker and sideboard counterspells are all tremendous upgrades to the two-color deck. When the mana is this good in Standard, why not play the best combination of spells available to a given strategy?