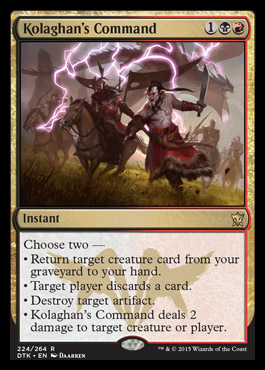 This card is really polarizing people, which is very interesting. Some have called it the best of the cycle, some the worst. This certainly feels a lot like the others to me – a card with sideboard modes but enough maindeck modes that you can feel confident slotting this in the main. I think it’s a mistake to compare this to Blightning because it obviously doesn’t compare favorably to that. This does a ton of useful things and while each mode feels weaker than the modes on the other commands, in the colors this is in, I can’t imagine other modes I’d like better that wouldn’t entirely break the card. All of the commands are around $5 on SCG which means they have no idea, either. Ojutai’s Command climbed from $5 to $6, but it has had the most hype and it’s been spoiled the longest, so that’s entirely predictable and doesn’t really indicate much.

I don’t necessarily like this card at $5. I really don’t like any non-mythic at $5 for speculation purposes since the ceiling is probably around $10ish in a small set with more than one good card and it’s tough to make anything buying at $5 plus fees and selling at $10 minus fees. You’ll make money, but a $2 rare can as easily hit $10 and there will likely be one of those in the set. If you want these to play with, I wouldn’t necessarily preorder. I have a feeling these will go down from $5. 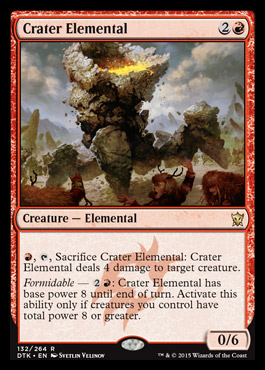 Awkward. This card is just… goofy. This is going to be an absolute bomb in limited since it does 3 things and does all of them well (Stop their attack, remove a threat, serve as a finisher) but it just seems awkward in standard. Where do you want this? Which deck? This seems like a bulk rare, but at least know it exists before the prerelease because this will pull pants down. 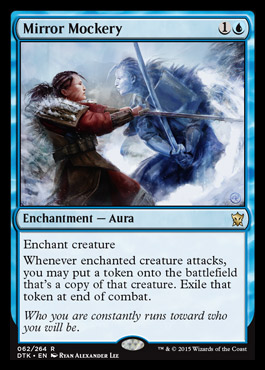 Splinter Twin this is not, but I don’t know that I don’t want this in some blue-based decks, especially in EDH. Still, being forced to attack with the creature means this has liabilities that cards like Followed Footsteps and Progenitor Mimic don’t. Dash creatures have the abilities you most want to be copying and those are in awkward colors if you’re also playing blue. Flamerush Rider isn’t getting any play and this is heavily reminiscent of that. This is likely a bulk rare, but it does a VERY good job of stymieing their Siege Rhino so it could see sideboard play. Feeling saucy? Jam it on your own Rhino and hope they don’t kill it. This is sometimes pseudo-removal, sometimes pseudo-value for your creatures with abilities that trigger when they come into play but are robust to survive enough attacks for you to get value. It’s awkward and maybe we have better answers for Rhino in blue. Bulk, probs. 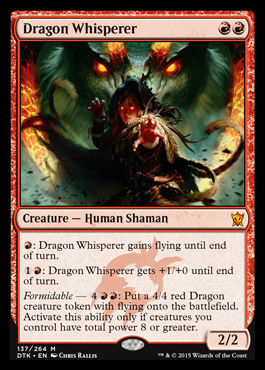 So red felt left out when black got Stromgald Crusader I guess. Crusader didn’t really see that much play, which is too bad because this card is basically that with a slightly easier pump but no protection if you remove its formidable ability. Is formidable enough to take an uncommon with pro white up to a mythic rarity without pro white? I imagine this is mythic because this straight Dragon Roosts games out of reach in limited, even at rare? I don’t know. This card is really awkward.

This is also sold out at $4 on SCG in under 24 hours. Clearly red mages are ready for another pump knight and see the value of a creature that isn’t totally useless late in the game when you have extra mana, though you’ll need a lot of creatures in the deck to make sure you get that formidable trigger. Someone is super hyped about this card! For the record, here’s what spikes are saying  and with the ability to swing through/over a Courser of Kruphix and Sylvan Caryatid a concern for red decks, and the two red pips helping some sort of devotion, this could get there. I think the fact that it’s sold out is telling. Someone wants this, and they want it bad enough to buy out SCG. But then, they did the same thing for Pain Seer, didn’t they? 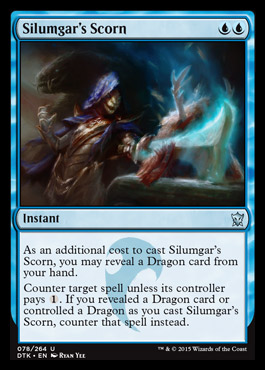 I am not as hopeful as others. I think Force of Will is a lot more awkward a spell in a format where you can’t Brainstorm to try and get a blue card to pitch and Standard conspicuously lacks Brainstorm. You can’t compare this to Force of Will’s power level, natutally – this is sometimes a Daze you have to pay for and sometimes it’s a Force of Will you have to pay for. Those spells aren’t good because of their text boxes, they’re good because of their mana costs and how you don’t pay them.

Scorn suffers from the fact that even if you decided you wanted to play UW control and jam four copies of Dragonlord Ojutai and/or Pristine Skywise, you will still have a lot of situations where this is a Daze, and that’s not going to hack it most times. The spikes are split, though not evenly. Is there money to be made here? Maybe! People tend to discard “draft chaff” in the early weeks and then randomly an uncommon will spike to a crazy amount, so if you can sock free copies away in a box, maybe do that. I am bearish on this going anywhere, and I’m certainly not in for cash the way I was in the past on cards like Boros Charm whose presale prices were low. I like this less than I like Stubborn Denial which requires you to have a creature, but it doesn’t have to be a Dragon.