Stompy is an archetype that's been around almost as long as green creatures and pump spells have been around. The goal is simple: drop efficient creatures, make them bigger, and do lots of damage quickly. Sometimes there is a sub-control theme (yep, green can do that) to complement the aggro package.

I'd been twirling around the idea of a Modern version of Stompy in my head since about 2013 (and even had a rough version drafted), and had seen a list here or there in the wild, but it was Hans Christian Ljungquist who popularized the deck with his mostly very solid list at the Bazaar of Moxen tournament on May 3, 2014. Here is what he ran:

And thus the core of Modern Stompy was born: Tusker, Baloth, Experiment, Militant, Geist, Ooze, Rancor, Vines. The deck has undergone a lot of changes since (by Ljungquist himself as well as others in the Magic community), but these cards have endured the entire time. 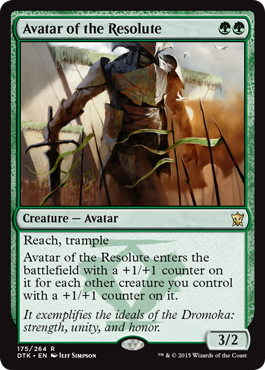 A couple of the big changes to Stompy included removing 5 drops (which have no place in an aggro deck), and adding Treetop Village (some also use Horizon Canopy for a bit of reach). With the upcoming release of Avatar of the Resolute, this opens the deck up to dropping 4 drops, too (mainboard at least), and possibly even 3 drops (Baloth is likely too good to give up, though, even if he is a little slow). Below is what I propose for the Stompy mainboard going forward.

2 Aspect of Hydra
4 Vines of Vastwood

The main is very tight, but I do want to try Young Wolf either in place of Dryad Militant or in the sideboard for its resilience and synergy with Avatar (if it were in place of Militant, Militant would then have to be sideboard, because it's just too relevant against Lingering Souls, Delve cards, Snapcaster decks, etc).

I also want to test dropping Baloth for Garruk's Companion, and then a Forest for another Aspect (which is crazy good -- I wish I could run 3-4, but can't seem to find room).

If you're wondering, we run Prey Upon instead of Dismember to avoid life loss (how many Modern decks can you say cause themselves no damage?), which is very relevant against the ever-popular Burn, among other decks. Plus, it's been plenty sufficient almost always in my experience -- our primary concern is beating face, so sorcery speed removal is much less of a concern here than it is in other lists. And Dismember sideboard alleviates the rare problem it does pose. Some disagree with all of this and they could be right -- feel free to try Dismember main yourself.

The sideboard I haven't finalized yet, but it should probably include some number of Hunt the Hunter, Unravel the Aether, Dismember, Choke, and maybe Kitchen Finks, among other things.

15 thoughts on “An Introduction to Stompy”