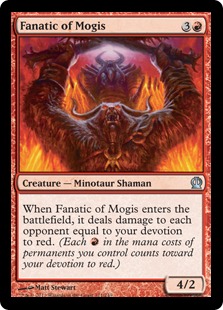 Before Return to Ravnica rotated, I was a big proponent of Red Devotion. The deck was super explosive with Burning-Tree Emissary and Nykthos, Shrine to Nyx, it has the most efficient removal spell in the format in the form of Chained to the Rocks, it could just ignore opponents with the power of Fanatic of Mogis, and it could crush deck trying to one-for-one it with Hammer of Purphoros and Assemble the Legion. Basically none of that is true of the deck right now, though the deck does still have some potency. Enough for Dylan Hysen to Top 8 the SCG Open this weekend with this version:

I can't help but wonder if the other Thunderbreak Regent and the other Goblin Rabblemaster decks are just taking better advantage of those cards, but it's worth considering that this is the only Dragon Whisperer deck. We haven't seen much of this card at all, but it doesn't take a very vivid imagination to see generating a couple 4/4s with Nykthos Mana just breaking a board stall wide open. Given the relative power level of the threats and the fact that there are enough dragons to mess up Crux of Fate, this deck looks like it presents a gameplan worth executing in Standard.