Welcome back, readers and fellow speculators!

I've written a lot of "MTG Stock Watch" articles in which I've given you guys a bird's eye view of all the changes to the sub-$5 cards as well as the Legacy staples (and occasionally sealed product price changes). It dawned on me that as interesting as I find writing these articles is, they provide "reactive information," by which I mean the cards have already moved/jumped.

While this is awesome for the players with big collections who can now go pull the cards I bring to light out of their binders/boxes it doesn't really help the player with a smaller collection because by the time they read about the price changes it may be too late to gain anything financially. That thought led me to ask myself how I can provide "proactive information" to my readers, so they can get ahead of these jumps.

I've previously done articles breaking down the Modern metagame, which got a lot of positive feedback. Thanks to the power of the internet, I am able to review previous metagames thanks to this site.

Looking over the Modern deck archetype breakdowns, we can see the top 5 decks are:

Now it is important to note that these percentages include MTGO events, and card prices on MTGO have been known to warp the metagame (hence so much RDW). However, it does seem foolish to discount this factor when considering deck archetypal makeup for smaller events (local PPTQ's, FNMs, etc) as the cost barrier is still a very real thing and while the people who travel great distances to play are unlikely to play subpar decks due to cost, the ones who only travel locally are very much driven by said cost barrier.

It's also important to note that these five decks make up 45% of the expected metagame, so there's a very high likelihood that if you were to play in a bigger event you'd play against at least one if not several of these decks. Below we can see the most played Modern cards: 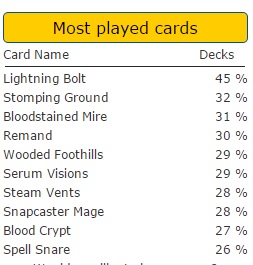 If you remove lands from the list we have one red card and four blue cards. As many have noticed Lightning Bolt is by far the most common card played in Modern so this one isn't a surprise. It's also not surprising to see the other four spells as blue cards that are all (typically) played in Twin Exarch.

What is interesting is that while Twin Exarch only makes up about 14% of the field, even the lowest card on the list is seen 26% of the time. In fact, Twin Exarch and Grixis Control are the two main decks of Modern that play all five of the top 5 most played spells.

Looking over the top 5 archetypes of Modern we actually have very little overlap (save the Lightning Bolts). I'm also having trouble thinking of cards that fit in one of those archetypes that hasn't already spiked. However, it is useful to look at the less represented decks to see if there are any that seem to have a good matchup against the top 5. To help with that we need to look at the top 5 decks by their win conditions.

Now let's consider what the best way to get around these win conditions is:

Again, sadly there's not a whole lot of crossover there. We get some in the fact that Jund plays a pretty greedy manabase and no mana dorks and Urzatron really needs to set up Tron quickly (if facing off against an aggressive deck) in order to control the game properly. A good card against both decks is Fulminator Mage, which once sat around $50 before plummeting with the MM2015 reprint to around $25 (and $20 for said reprint). 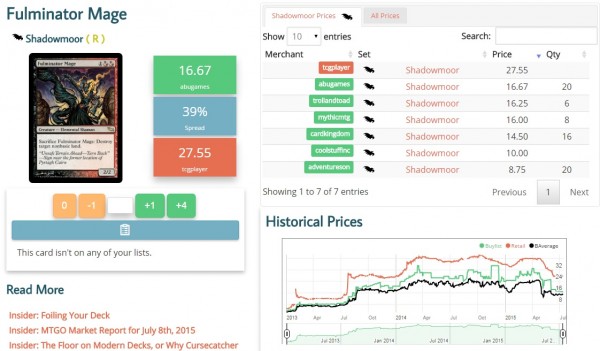 The other obvious pick is good ol' Spellskite, which works well against Twin Exarch (by stopping them from being able to target the Exarch with Splinter Twin) and RDW by redirecting to itself spells that would deal 3 damage to you (instead you might take 2 to pay for the redirect, but hey it's still a 33% damage reduction). 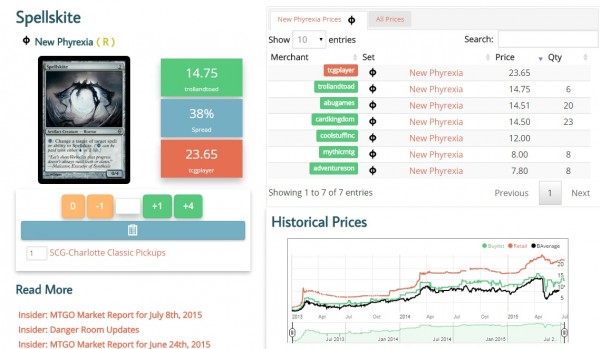 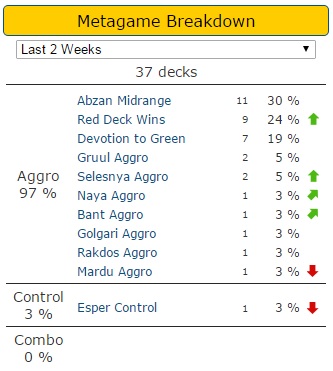 Looking over the Standard archetypes we see that it almost looks like we're back to a Rock/Paper/Scissors format again (hopefully the introduction of Origins increases the diversity of the metagame). The top 3 decks of the format are: 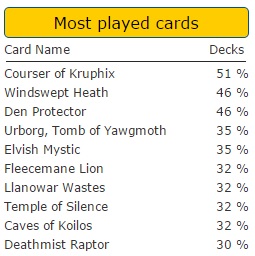 Reviewing the most played cards and top 3 archetypes (which make up 73% of the metagame), I can't help but notice all three are weak to Anger of the Gods (as well as every creature on the "most played" list, save Courser of Kruphix).

Unfortunately, Anger is in Theros block and people are already wary of trading for anything from Theros, which you could put to use. Looking at its graph it's near its all-time low again. It's also important to notice that it's the three-mana wrath of choice in Modern thanks to being so good against Kitchen Finks and Voice of Resurgence.

Now because it's in Theros and rotating soon, I wouldn't go out and buy them unless you can get them around buylist price, but if you're trading Theros cards for other Theros cards this one is likely a good long-term hold, and if it picks up play again in Standard it could get one last bump.

The most powerful blue card in Standard is arguably Dig Through Time, which has already proven its power in Legacy as well. The fact that it's in Khans and won't rotate also means that it has more time for a price rebound in Standard. The one concern is the potential for a banning in Legacy (and while I don't think it will occur, it is possible given the card's power level and the recent dominance of decks utilizing it). 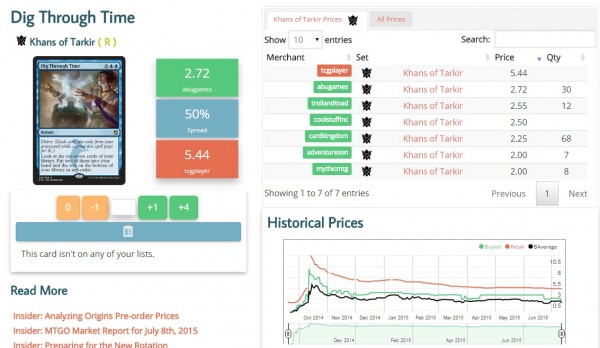