Below are the total set prices for all redeemable sets on MTGO. All prices are current as of September 21st, 2015. The TCG Low and TCG Mid prices are the sum of each set’s individual card prices on TCG Player, either the low price or the mid price respectively. 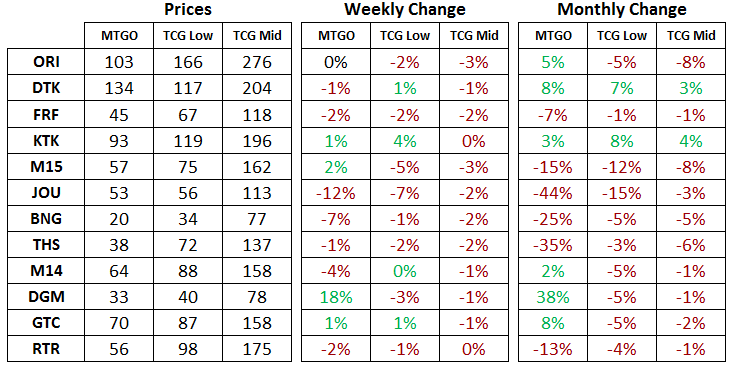 Voice of Resurgence has seen a surprising move up in the past month, going from 18 to 30 tix. This type of move is a good demonstration of the price swings that Modern-playable cards can experience. September is typically a strong month for interest in Modern. Speculators who have ridden this card up from its recent bottom should take advantage and sell before Battle for Zendikar is released and players switch focus to Fall Standard and the new draft format.

For GTC and M14, prices continue to drift along in uninspiring ways. Look for these two sets to get one last small bump in prices near the end of October as the redemption cutoff date gets nearer. Neither is exceptionally good value relative to paper prices at the moment, but the end of redemption for these sets means there will be a steady loss of value from November onward, which will encourage the final spurt of demand.

These sets have a little over two weeks left in the Standard format on MTGO, and set prices are showing this effect. THS is nearing a bottom and is approaching excellent value relative to paper prices. However, until paper prices stop falling, it's unwise to start aggressively targeting THS mythic rares. Junk rares from any of these sets that might be played in Modern can be speculated on though.

Any rare that is still Standard playable won't officially bottom until after rotation, but those priced at or near junk levels (0.05 tix or less) are almost at an absolute bottom. Speculating on junk rares due to their potential in Modern is a strategy with long odds so the more you pay for long-shot specs like this, the higher the opportunity cost. Stay disciplined and wait for the right price in order to avoid tying up too much capital in specs like this.

Sylvan Caryatid still sees fringe applications in Modern Jeskai Ascendancy decks and is currently priced at 0.05 tix, so it's safely within the price range of bulk rares. Temple of Malice gets played as a four-of in Gishoalbrand decks, though at 0.2 tix it is still too expensive to speculate on. Temple of Silence and Temple of Deceit are two other targets that could see play in Modern.

Magic Origins continues to be the best value of all the redeemable sets. The gap between a set of ORI on MTGO plus the $25 redemption fee is $38, and that is valuing tix at $1 per tix. With a little over two weeks left of drafters focusing on ORI draft, the window for readily available cards from the last core set is closing.

Speculators who have been acquiring cards from ORI will be set to reap gains in two ways. First, the release of BFZ and the rotation of Theros block and M15 means that Standard will get a shakeup and the relative utility of all cards will change. Cards that find a home in the new Standard will appreciate in price as they are discovered. This process means that cards that are already heavily played won't see much benefit from rotation.

The second way that speculators will benefit is a closing gap between paper and digital. In the last month, a set of ORI has held quite steady at a few tix over 100. This implies a rough equilibrium between demand and supply. With redemption being a large part of demand, we can see the results in a declining price for a paper set. However, once supply from drafters dries up, redemption will continue its work and move ORI prices higher. This doesn't occur overnight, but after BFZ is released, ORI will be accruing value over the course of the Fall.

Elsewhere, Tarkir block sets continue to drift in price, though they have largely found their level. These sets have already experienced some of their price appreciation due to no longer being drafted, but just like cards from ORI, individual cards will see a shakeup in relative utility once BFZ is released.

The release of the full spoiler for BFZ has resulted in a wide agreement that the overall power level of the new cards is lower than in Tarkir block. With Lightning Strike and Stoke the Flames rotating out of Standard, and no obvious replacements in BFZ, a card like Draconic Roar could find a lot of demand in October. Although I wouldn't entirely count out the Eldrazi, it's looking like the skies of Fall Standard will be full of dragons.

For several weeks now we've been discussing moving from Modern positions to ORI, or later in October to THS block positions that have rotated out of Standard. As shown by the Modern Total Format Price Index, prices may have found a local ceiling and actually started declining a little bit. This trend is expected to accentuate with the upcoming release of BFZ online.

However, when looking closely, different Modern cards are in different price trends. Positions such as Scapeshift, Living End, Grove of the Burnwillows, Horizon Canopy and Voice of Resurgence are in a marked upward trend initiated about a month ago. Misty Rainforest has even doubled its price compared to early this September. These, and others, should be on speculators selling lists. Most of them should lose some ground when BFZ hits.

At the other end of the Modern spectrum are positions that are currently at a low point, the lowest for several months for some of them. This means that unlike Modern positions speculators should consider selling now, these other Modern positions could be consider buying opportunities. Cards in this situation include Okina, Temple to the Grandfathers, Night's Whisper, Blood Moon, Magus of the Moon, Tectonic Edge, Thundermaw Hellkite, Thalia, Guardian of Thraben and Sower of Temptation.

The only hesitation here is that despite their very attractive prices they are also likely to lose an additional little chunk of their value for the same reason as any other other Modern positions--the release of BFZ.

One of the few striking facts in Legacy/Vintage these days is the abrupt drop of Infernal Tutor that lost more than 20% of its value in a week. Since this card is absolutely not played in Modern, only its demand for Legacy, Vintage and casual support its relatively high price.

The Tutor in Dissension was one of our picks back in June. Despite this recent plunge we recommend holding onto this position, as well as other Legacy positions, until the Legacy MOCS in November.

Probably no strangers to the position of Kudoltha Boros this week in the Pauper Metagame, Ancient Den and Firebolt are nicely up this week. Another artifact land, Seat of the Synod, has hit a floor this week and could be a good target for Pauper speculators.

After being mostly above 1 Tix since June, Mental Note is now around 0.25 Tix after a sharp drop this past week. At this price Mental Note is definitely an attractive target to consider.