Welcome back to another High Stakes MTGO article!

This week again saw a decent amount of movement on my account, with about a dozen positions bought and sold. The upward momentum on prices consecutive to the release of the full list of Eternal Masters is still on this week.

After a little expected price weakness, Infernal Tutor and Counterbalance seem to be back up as I'm writing this article. Even Chrome Mox, a reprint-to-be card, is almost back to its pre-spoiler price.

At the other end of the format spectrum, my beloved Magic Origins painlands, especially Caves of Koilos and Llanowar Wastes, took a little hit this past week.

Nonetheless I was still able to sell several playsets of Shivan Reef following the hype around Saito's UR deck. Whether everyone wants to draft Lorwyn or save for EMA, I'll have to be more patient for the rest of my painland collection.

The most recent snapshot is here. 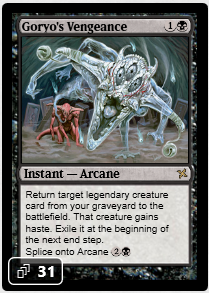 Goryo's Vengeance seemed to be on a soft baseline between 15 tix and 19 tix since this past Fall. A peak at 35 tix in February showed us the potential of this card before Betrayers of Kamigawa flashback drafts hit and sent the price back to its baseline for the past 2-3 months.

I decided to take my chance on this one as the price was getting into the 14-15 tix range. Hopefully this floor holds and we are only looking up from now on. 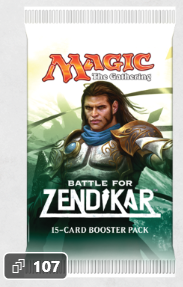 Since last April the price of Battle for Zendikar packs has been declining, looking for a solid floor. By the end of May it seemed that the floor may been reached.

I therefore decided to add more boosters to the pile of BFZ packs that, as it seems, I had started a little bit too early. Both BFZ and OGW boosters went up recently. We'll see if the trend is real or if it's only a speculator movement. 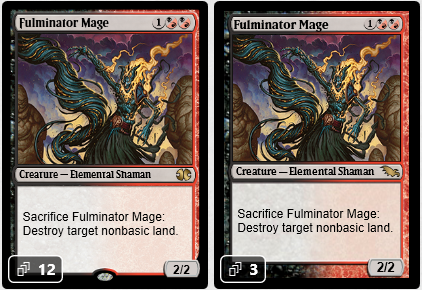 Another Modern Masters 2015 pick I clearly held for too long and was probably too greedy with. A proper selling window would have been sometime this past January.

The price of Fulminator Mage went back to 10 tix last week, its floor since the MM2 reprint, and I decided to consolidate my position. Let's try not to miss the next good selling window. 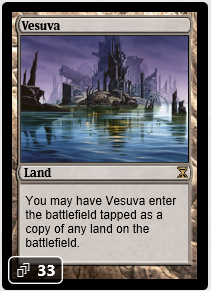 A timely article from Alexander is all it took to put Vesuva back on my buying bucket list. I was okay with grabbing this land at 4 tix a few weeks ago---I'm even happier to complete my stock here with 33 additional copies under 3 tix each on average. 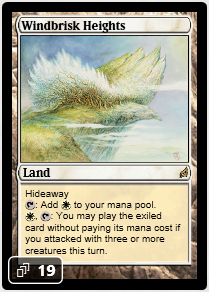 A first target from Lorwyn flashback drafts. I'm looking to acquire more copies, so this is a first round of purchase. My target for these lands was 3 tix or less. We'll see in the coming days if 3 tix was a good price or if it can go lower with a second week of flashback drafts in the world of Lorwyn.

There are obviously other great targets in Lorwyn that I haven't had a chance to get on yet (Thorn of Amethyst, Cryptic Command and Thoughtseize to name a few). Maybe this week I'll get to them. 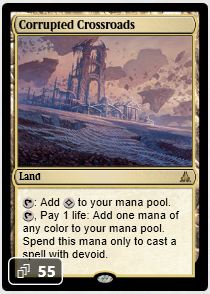 Brian DeMars made a great point about Corrupted Crossroads in his last article. This land is able to produce any color of mana and colorless, which could come in handy with the Eldrazis still around after the next Standard rotation.

At this point this is nothing more than a bulk spec with virtually zero risk, and great potential upside if things line up perfectly next September. The price of Corrupted Crossroads may go a little bit higher as other speculators catch up. But without a real demand from players, I would expect the price to drop back below 0.1 tix soon and it will be time to restock again. 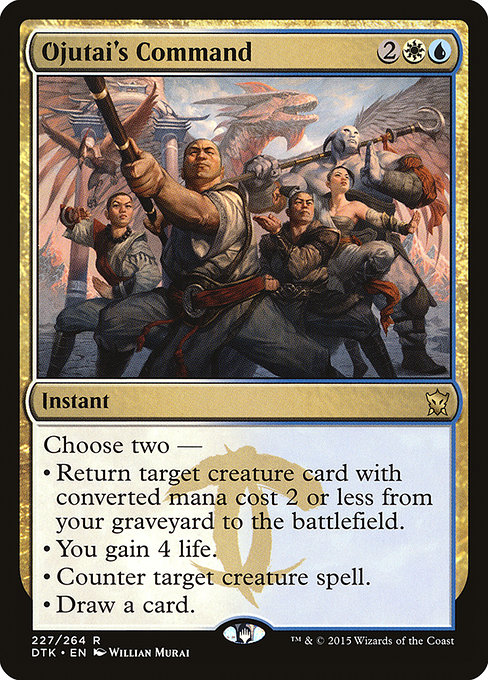 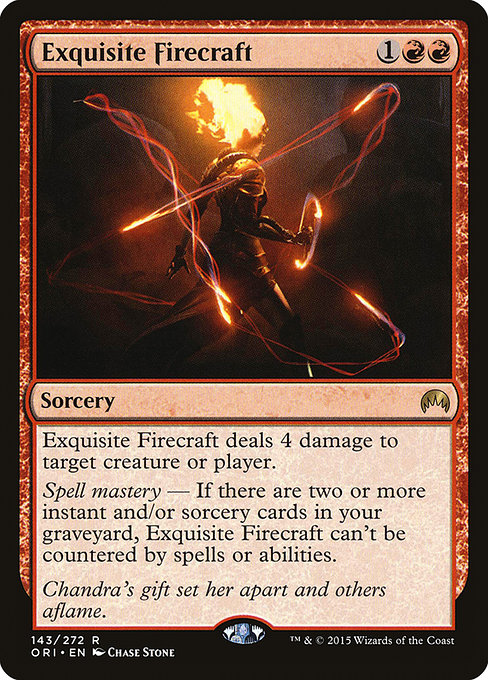 Two cards from sets next on the Standard rotation chop block. These specs didn't match my hopes so I was looking for any good window to sell them, which is what happened last week. Exquisite Firecraft could get better if Saito's deck gets more popular but rather than betting on that I decided to sell my copies now with only minimal losses. 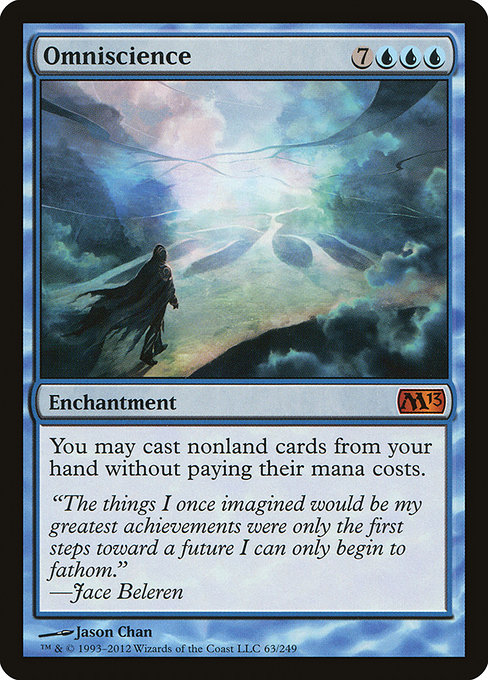 Omniscience was one of the biggest winners following the EMA hype---jumping from 7 tix to 15 tix in just a week. I was holding 25 copies for a while now and the recent price bump is exactly what I was hoping for. Having almost doubled here I thought it was a great time to sell the blue enchantment.

Am I potentially leaving some money on the table by selling even before the release of EMA and before Legacy Festival events start? Possibly. However turning down more than 80% profit now and crossing my fingers for more in the coming month is not something I'm inclined to do.

The only painland I sold this past week. Saito's UR deck most likely helped sustain the price growth of Reef while other painlands plunged. Still more than 300 copies to sell with the red-blue painland. 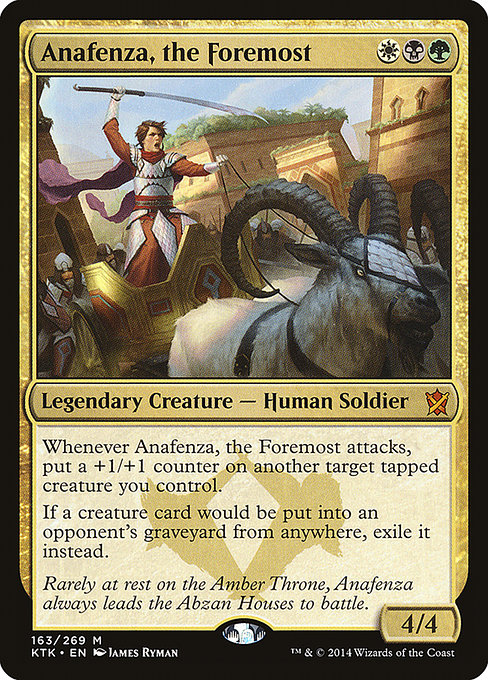 Since last April this powerful mythic from Khans of Tarkir was on a slow but fairly consistent upward trend. Although a great Modern card, Anafenza is not heavily played these days so I don't know how long that upward trend can keep up.

With a price reaching 4.5 tix, I felt it was time to take my profit on that spec and move on. 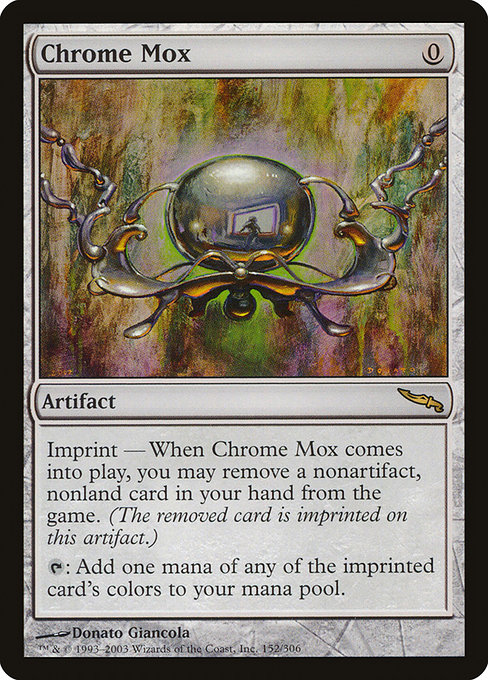 Soon after Chrome Mox was spoiled in EMA its price dropped below 3 tix. A week later the price bounced back to 4 tix.

I saw an opportunity to exit this position with minimal losses and I'm ready now to rebuy the Mox during EMA release events. I would expect the price to drop again below 3 tix.

What I'm expecting from the next few weeks is pretty much the same as last week. All my positions susceptible to benefit from the hype around EMA did so; Infernal Tutor is currently topping its record high for instance. Odds are it might climb much higher.

One category of specs I have been paying more attention to recently is my BFZ foil mythics. Many of them have been on the rise for about a month now, and as it stands these positions are starting to pay off.

On average all of my BFZ foil mythics are currently up by about 25%. That doesn't seem like much but I was expecting these guys to yield a return similar to full set specs, and they are finally entering that range of returns.

This is also a significant number because, as with full sets, I was able to sink a lot of tix in a small number of cards---more than 2500 tix in only about 200 cards. Now that my BFZ foil mythics are getting profitable I'll be monitoring their prices more closely.

Not all foil mythics behave the same and not all sets have the same distribution of foil mythics. The only thing that seems consistent between the most recent sets when it comes to foil mythics is that their prices appear to sustain for as long as the set is redeemable.

So I'm not in a rush to sell my BFZ foil mythics, but for now on that's something I'm going to keep an eye on. I haven't bought any OGW or SOI foil mythics yet but I might review the data we have available and reconsider foil mythics in these two sets.