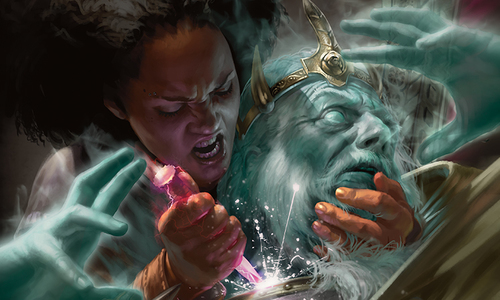 Holy spoilers Batman! The full set list has finally been released and wow did we get some goodies! This week I’ll be delving into the new cards from the spoiler and next week we will take a look at the set as a whole for another edition from my popular Top 10 series. Let’s start off today with a bang.

Selvala, Heart of the Wilds 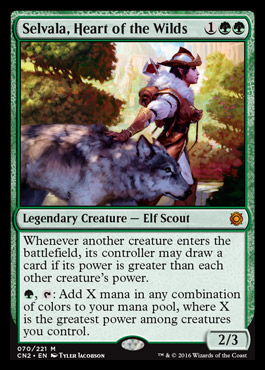 Last time around we were introduced to Selvala, Explorer Returned, but this time we got a huge upgrade with her new version, Selvala, Heart of the Wilds. When I first read this card I thought there was a lot of text to get through. I find that to be a common occurrence with cards from these Conspiracy sets. Once you boil down the essence of what’s happening though, the cards are easy to understand.

With Selvala’s new self there are two different parts to be concerned with. The first is the group hug mode of the card. Her mutually beneficial card drawing aspect may worry some players and cause her not to get played initially. Basically when a bigger creature enters the battlefield or someone creates the biggest creature in play, they get to draw a card. This ability could trigger every turn if players keep playing bigger and bigger threats. If your deck is full of giant monsters then you will be the one most taking advantage of this ability but other players can benefit too.

The second ability is where we break it though. Initially, if Selvala is the only creature you have in play, she acts the same as a Birds of Paradise accept she can filter a green mana to another color if you need it. You only get one additional mana when you have her in play though. If you have any other bigger creature in play though, you are going to add mana equal to that creatures power! Talk about mana acceleration! Even if you only play another three drop on turn four, as long as it has three power, you can add an extra two mana! This mana accelerant nets you more and more mana to play bigger and bigger monsters. It reminds me of Bloom Tender in the way it functions as a powerful mana boost.

I think this mythic is going to be a huge hit. Even if you have an unlikely draw with no bigger creature to generate mana from, you can always still get the normal plus one bonus that every other mana dork gives you. You can also fix your mana color requirements to smooth your draws as well. I love this card for every casual format. At $5 this is a great initial value. We may see non-believers not buying in initially but if it goes down by much, it may be time to buy in. 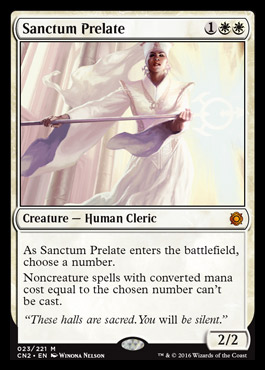 Sanctum Prelate is like Meddling Mage and Void Winnower had a love child for Legacy Death and Taxes. Three mana is a lot for a Legacy card but as long as the power level is high, it falls within an acceptable range. For this card, you are getting an unprecedented ability, so that should qualify as a high enough power level for the format. The great part about this new white weenie creature is that its effect is not static. You can change your choice depending on the matchup. So in a combo matchup you might choose the number of their win condition whereas against most of the other matchups you might choose an overall powerful cost like one or two. Everyone can still cast creatures so you won’t be stopping their Tarmogoyf or Delver of Secrets, but you could be stopping their Thoughtseize, Lightning Bolt, or Brainstorm.

It’s no surprise this mythic rare has a preorder price of $25 and foils will likely be enormously priced. As a non-legendary creature you can even have more than one in play with multiple costs prohibited. If you have a way to blink creatures, you could even reset your choice later in the game. Sanctum Prelate offers so many ways to stop your opponent from doing whatever broken thing they’ve set out to do. I don’t know if Death and Taxes alone will be able to propel the price of this card even higher. It’s safe to estimate an initial price drop and pick up your copies once they’ve bottomed out. 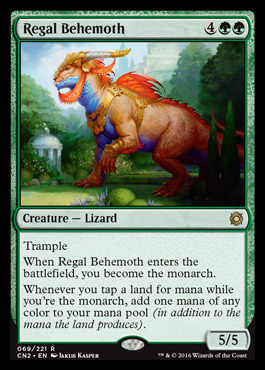 If you’re looking for a breakout bulk rare, my bet is on Regal Behemoth. This guy is a secret powerhouse. For your six mana investment in a format like Commander you are getting decent stats with the 5/5 trample, but the most important part is the Mirari's Wake ability. Doubling your mana in Commander is big game and is an easy way to propel yourself to victory. There are a lot of ways to increase your mana production but cards like this are the best. They may seem like a big investment, but the payoff is worth the cost. Trade for all copies of this bulk rare any time you can. 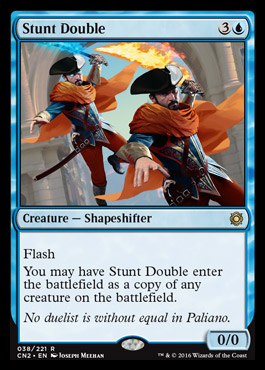 Although I was not surprised to see Regal Behemoth as a bulk rare, but when I saw Stunt Double also at bulk rare status, I was shocked. Wizards is getting inventive with the Clone archetype of cards and adding a variety of different effects to the original design. This time around you not only get the traditional Clone effect but you get to do it at instant speed! So, you can copy a comes into play effect or a beefy dude to snare an unsuspecting attacker. Stunt Double is going to be a huge hit for Cube and casual players.

The internet initially freaked out about this card causing format shifts, but I think Daretti, Ingenious Iconoclast, is quite a bit overrated right now. For Legacy and Vintage to accept a card into their format, the power level must be through the roof or an upgrade to a preexisting card. A new card could also provide a unique effect and that’s the closest thing Rakdos Daretti comes to having any real impact.

Don’t get me wrong, I think this is a super fun casual card. I’ll consider it for my Cube as well as a couple different Commander decks, but the hype about Eternal impact is where I diverge from the current line of thought. Even if this card does wiggle its way into a fringe deck, that won’t do much to help the price slip that is going to occur over the next couple of weeks. $15 isn’t a tremendously outrageous price for this card, but I think it will settle a bit lower than that. 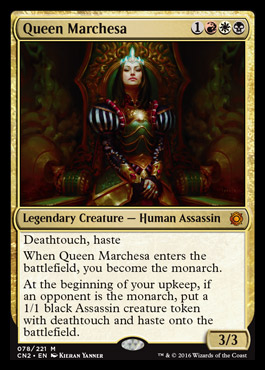 Interesting new commanders always make good new cards and I think players will want to build around Queen Marchesa. She provides a unique effect but could be utilized for basically any strategy. You could use her in a control shell as a great blocker or in an aggro deck where it’s your goal to make someone else the monarch. Those 1/1 death touch assassin tokens are no joke, so if you can turn that mode on, you are definitely in business. We’re not breaking the bank with this one but it should stick around $5. 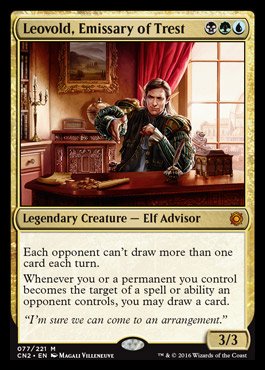 Speaking of Commanders, take a look at Leovold, Emissary of Trest! Sultai was in desperate need of some new options and Leovold is a big deal. He is also a Tiny Leader for what its worth. I know some people still play that format and this three mana 3/3 is the only option for that spot. The casual appeal is there but so is the competitive. I think this Inquisition of Kozilek target is Legacy playable as well. His stats are fine but the no extra cards for your opponent is a huge deal. Shutting down the format's centerpiece Brainstorm is a huge asset to any potential Legacy card. The only downside is the mana intensive cost. The triple colored requirement may seem like an issue, but although Sanctum Prelate has a less restrictive color requirement, they both fit nicely into one archetype. Even if you only play one or two copies, I think Sultai Delver, Shardless Sultai or any variant of this tempo archetype would utilize Leovold well. 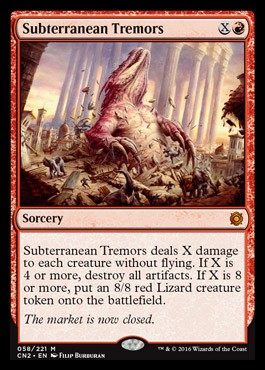 Subterranean Tremors may look like a bulk mythic, but hiding in plain sight is a casual hit. Earthquake effects are underrated in Commander for many reasons, but this isn’t the ’93 Earthquake. Tremors is versatility incarnate. Whether your’re sweeping away tokens, destroying all artifacts, or wiping the board and getting an 8/8, there is great utility for this card at every stage of the game. Five mana is not a lot to invest to kill a bunch of creatures in play as well as all the artifacts. Then late in the game, you can get a huge 8/8 for some reason. I love this card and I will probably even try it out in my Cube. 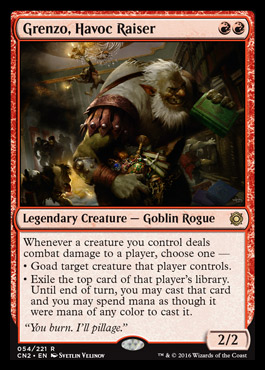 From time to time, Legacy Goblins gets some new options. This time around, they will have Grenzo, Havoc Raiser as part of their arsenal. Due to both the Legacy appeal as well as being a most likely Cube addition, Grenzo’s foil multiplier should be quite high. As of this writing, the normal copies are around $2, while the foils are in the $20 range. Long term, investing in Grenzo should pay off but only if you’re in it to hold for a while.

One of the aspects of Conspiracy, and Conspiracy: Take the Crown, I look forward to the most is how they will impact my cube. You’ve seen me mention this fact in many of the cards above. I’m really excited for all the updates to the Cube that will come out of this set.

Both of these sets are geared toward multiplayer formats, but there are an interesting array of fun new options to enhance Cube Draft. This may not have been the original purpose for these sets, but, I think it’s one of the best parts.

The first time around I joyfully added Agent of Acquisitions, Cogwork Librarian and Lore Seeker. I love everything those three cards add to the drafts. Instead of adding a booster pack from a random set to the draft when Lore Seeker comes up though, we add an additional Cube pack.

This time around, there is a cycle more similar to Aether Searcher or Lurking Automation. The only exception is that these are colored cards that have some crazy abilities tacked onto them. Take a look. 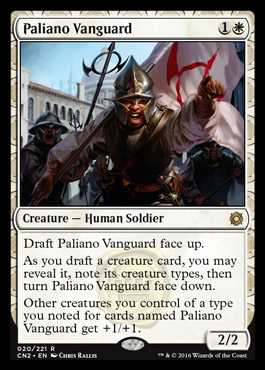 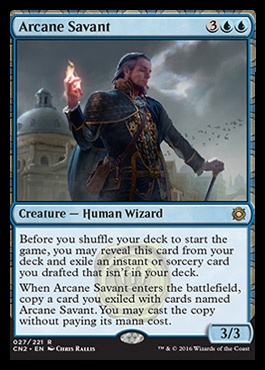 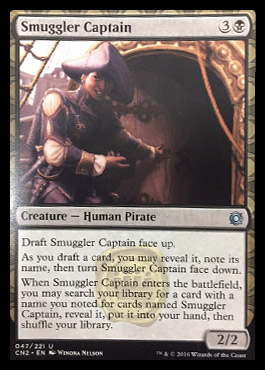 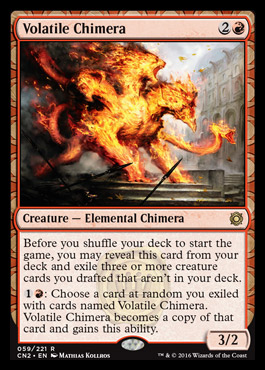 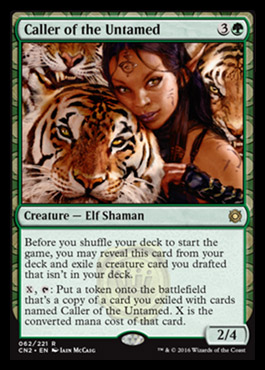 I can definitely think of some broken interactions that can come up in Cube and I’m sure there are other crazy possibilities as well. Think about casting Cruel Ultimatum for free on turn five or copying an Eldrazi or even just having a tutor for your combo piece. There are so many possible interactions with this new cycle, but I think they all create fun opportunities. I wonder if they will prove too broken for Cube Draft though, but I’m excited to try them out to see.

That’s all for me this week. I’ll be back next week, hopefully with some great stories from the release events I’m running at my store, as well as more discussion about the set. Thanks for reading, I appreciate all the support from my loyal readers.

Until next time,
Unleash the Force of Lore!