Below are the total set prices for all redeemable sets on MTGO. All prices are current as of August 22nd, 2016. The TCG Low and TCG Mid prices are the sum of each set’s individual card prices on TCG Player, either the low price or the mid price respectively. Note that sets of Theros (THS) are out of stock in the store, so this set is no longer redeemable. 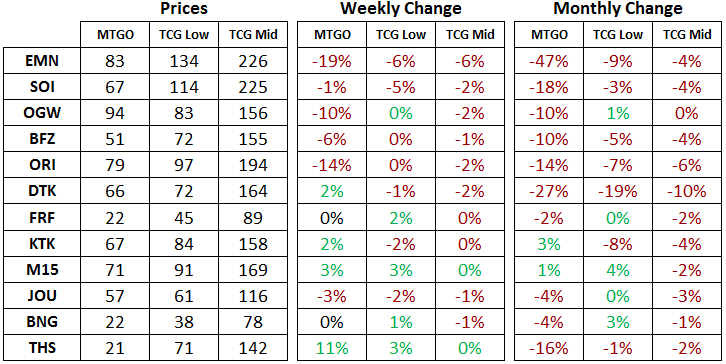 Flashback drafts add a booster of Worldwake (WWK) into the mix this week, making it Zendikar-Zendikar-Worldwake draft. The Limited Resources draft primer on triple Zendikar (ZEN) is an excellent starting point for drafters looking to get a handle on the format.

There are a number of high-value rares in WWK, so keep your eyes out for the creature lands like Celestial Colonnade, Creeping Tar Pit and Raging Ravine. Death's Shadow is another rare that is showing up as a four-of in Modern these days and is currently priced at 10 tix. Tectonic Edge and Searing Blaze are valuable non-rares to look out for as well.

Prices dropped substantially this week on all Standard sets except for Dragons of Tarkir (DTK). With Standard rotation nearing and a format dominated by Bant Company decks, players are turning their attention elsewhere. Speculators and players with an eye to the winter should be getting ready to scoop up cards from Eldritch Moon (EMN) and Shadows over Innistrad (SOI) over the coming weeks.

Taking a look at the Star City Games Standard Open results from this past weekend, the Top 16 decks feature ten decks listed as Bant Company. This type of prevalence is fairly uninteresting for the casual observer, but speculators should be thinking more deeply about what it means.

With the rotation of DTK and Magic Origins (ORI) looming, the Standard format is going to go through a major shakeup where Collected Company can no longer anchor this most popular archetype. When Bant Company is gone, the question is what will fill that void?

From a broad perspective, Collected Company suppresses four-plus casting-cost creatures, and non-creature spells more generally. Planeswalkers in particular look set to regain some utility. The three low-priced planeswalkers from Shadows over Innistrad all look to have some utility but haven't shown a ton of play in Standard yet.

Sorin, Grim Nemesis, Arlinn Kord and Jace, Unraveler of Secrets are all at attractive prices heading into October when Standard is destined to shift drastically. We are also approaching peak supply of cards from SOI so prices are depressed for economic reasons not just tied to the cards' play value in Standard.

The Modern format will be emphasized this winter with the December round of Regional Pro Tour Qualifiers (RPTQs) all being Modern Constructed. Between the paper and online events, there will be plenty of Modern testing going on with Pro Tour spots and travel awards to Dublin on the line.

Now is the time to consider where the format is going and to lay the foundation for where players will be putting their dollars in November and December. The release of Kaladesh at the end of September will trigger the last best buying opportunity for players and speculators prior to the RPTQs in December.

In the meantime, we have some recent results to consider. This past weekend Star City Games had their Invitational event in New Jersey. The Invitational featured a combination of Standard and Modern, but finished off with Modern for the Top 8. Here are those deck lists.

The results are very diverse, but we've got our old Standard friend Collected Company powering up Liam Lonergan's first place Elves deck. This DTK rare has been holding at a minimum of 14 tix since the release of SOI, but its time in Standard is coming to a close with rotation looming. Players and speculators should be ready to pick these up in October after they leave Standard as this card will be a four-of in multiple decks in Modern for the foreseeable future.

Brad Nelsons's Top 8 deck is a variant of Zoo powered up by Phyrexian mana spells, creature pump and the titular Death's Shadow. This WWK rare is being opened in the flashback draft queues this week and recently saw prices as high as 18 tix.

Sam Black has been touting this deck for a while and in his latest video series he's been testing out a delirium angle with Traverse the Ulvenwald and Gnarlwood Dryad. Players looking to play Modern this winter should pay attention to this new archetype and look to pick up the components of this deck sooner rather than later.

The popular triple ZEN draft queues have put pressure on all Standard boosters this week as EMN hit 4 tix, SOI dropped below 3 tix, Oath of the Gatewatch (OGW) is back to 3.1 tix, and BFZ plumbs new lows below 1.2 tix. Although there will probably be a slight bounce in booster prices at the end of the ZEN draft queues, it's not worth acting on.

Longer-term I expect BFZ to continue to bleed value and to go below 1 tix in October and possibly stay in the 0.8 to 1.2 tix range into 2017. OGW boosters will probably also dip below 3 tix in October, but then should recover heading into the winter. I expect OGW to hold a 3.2 to 3.5 tix range, with a chance at going all the way to 4 tix in December or January.

BFZ and OGW boosters are an excellent guide for what's in store for SOI and EMN boosters respectively. Expect a slow, long-term bleed of value of SOI boosters with occasional jumps in price.

It's important to highlight that the expected overall trend is down though. Speculators should steer well clear of SOI boosters and players should only hold what they think they can use in draft. EMN boosters on the other hand will maintain their value and can be speculated on when they dip in October.

As usual, the portfolio is available at this link. This week I finally pulled the plug on my BFZ booster spec and sold all my boosters for a loss. The introduction of leagues has changed the long-term supply of boosters and altered my expectations around how booster prices will evolve. Combined with the 6-2-2-2 draft queue being the only way to draft older formats, this has made the large expansion boosters long-term dogs from a speculative point of view.

It was time to throw in the towel on this one and admit the mistake before further losses were accrued. Sometimes the school of hard knocks is the only way to learn and it has delivered a valuable lesson to me in this case.