Below are the total set prices for all redeemable sets on MTGO. All prices are current as of August 1st, 2016. The TCG Low and TCG Mid prices are the sum of each set’s individual card prices on TCG Player, either the low price or the mid price respectively. Note that sets of Theros (THS) are out of stock in the store, so this set is no longer redeemable. 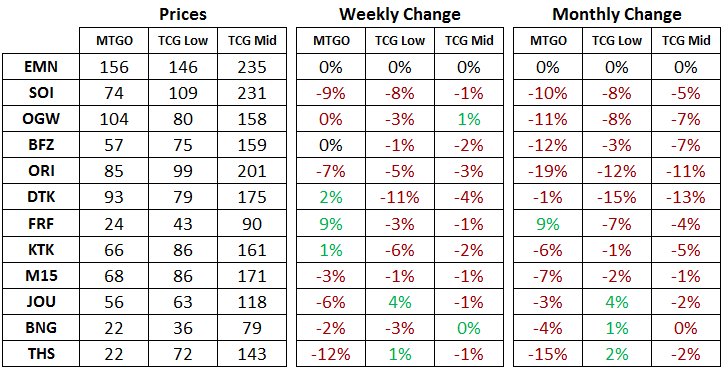 Flashback drafts are on hiatus for the next two weeks as the focus shifts to the new limited environment with the introduction of Eldritch Moon (EMN) to Shadows over Innistrad (SOI) draft and sealed deck. Flashback drafts will return with triple Zendikar (ZEN) draft on August 17th.

All eyes will be on Pro Tour Eldritch Moon this weekend in Sydney as the pros battle it out in the new Standard format. Since EMN was only released on MTGO this week, there is the potential for large price swings on any new cards that make an impact.

For Pro Tour Shadows over Innistrad, Jon Finkel was piloting a deck based around Seasons Past that saw that card briefly jump in price to over 10 tix as a result. Speculators who can spend some time this weekend would be well served by paying attention to the early results and coverage, and acting accordingly.

Nissa, Voice of Zendikar was another card that made an appearance in the early coverage at the last Pro Tour stop. It went on to anchor the G/W Tokens strategy, peaking at over 15 tix. It recently came down in price all the way to 7 tix but has now rebounded to a little over 9 tix.

Although MTGO doesn't get the duel decks anymore, this card's presence in the Nissa vs. Ob Nixilis iteration of that product will lower its price ceiling in paper, and thus the digital version through redemption. If G/W Tokens is a strategy that gets left behind this weekend, look for further price declines on this card.

There are plenty of deals popping up in the Modern format at the moment. One doesn't have to look too far beyond Theros (THS) to see Master of Waves and Thoughtseize are at attractive prices. Since the merfolk is a single printing and a mythic rare, it's a better long-term bet for speculators, but both are a good price for players to get their play set.

Elsewhere in THS, Elspeth, Sun's Champion is down below 2 tix after briefly getting as high as 6 tix during the Eldrazi Winter. Ashiok, Nightmare Weaver has a similar price trajectory. Both of these cards have proven to be fringe Modern-playable and current prices are a good level for speculators and players alike.

These are the kind of cards you want to salt away in order to be ready for a hype-based price spike from a big event in the winter, such as a Grand Prix. Buying these now while they are out of favor and no one is paying attention to Modern is a good long-term value play on a format where every strategy comes in and out of fashion over time.

Like many singles, booster packs have also taken a hit this week with the tix-only EMN prerelease events. Battle for Zendikar (BFZ) boosters are testing their lows again at 1.6 tix, while Oath of the Gatewatch (OGW) boosters have held up relatively well and are only down 0.2 tix to 3.1 tix. SOI boosters took a big hit, dropping all the way to 2.5 tix this week, but have since recovered to 3 tix with the opening of the draft queues and sealed leagues to product entry on Monday.

With the price movement of BFZ boosters as a guide, there is no long-term hope that SOI boosters will recover further in price from the current level. The reason for this is tied to the introduction of the popular sealed leagues. These events have greatly expanded the supply of boosters into the market.

With this week's release of EMN, there has been a step down in the demand for SOI boosters since you went from needing six SOI boosters to play a sealed league (or three to draft), all the way to two SOI boosters (or one to draft). However, the excess supply of boosters has had three months to accumulate in the market and in players' collections; this supply will not be changing like the demand is---so in the face of this demand shock I expect the medium- to long-term trend to mirror that of BFZ boosters.

BFZ boosters might never go above 2 tix again. While this set had all the above factors working against it, it also had the presence of the Expeditions weighing down the value of BFZ cards in both paper and on MTGO (the latter via the set redemption link). SOI does not have Expeditions, which means we can expect a higher price floor on boosters and sets, relative to BFZ.

The demand shock will only be further amplified when Kaladesh is released in the fall. This will further reduce demand for SOI boosters as sealed leagues for SOI block end and SOI block draft queues switch to the 6-2-2-2 prize format. This skews booster prize support relative to the cost of entry to favor EMN boosters over SOI boosters.

Add it all up, and SOI boosters are a long-term dog from a speculative standpoint. Speculators should avoid buying these at current prices, and players should try to sell any excess boosters sooner rather than later.

As Sylvain observed in his article this week, the drop to 2.5 tix on SOI boosters over the weekend was a profitable short-term flip. Keep this in mind for Kaladesh boosters with the release of Aether Revolt in the winter. The conditions for this trade will be identical, so as long as the trade is not too crowded, the potential profit of 0.5 tix per booster will be available.

As usual, the portfolio is available at this link. In the past I have identified foil mythic rares as being good long-term value. This has been borne out by the steady rise in the price of foil mythic rares from both BFZ and OGW. Although the change to online prerelease events has affected foil pricing (in particular driving up the value of foil uncommons), I believe the foil mythic strategy will still work for both SOI and EMN. We'll know whether I am right or not when we observe how prices change in the fall after the release of Kaladesh.

BFZ and OGW foil mythic rares only started rising substantially after the release of SOI, meaning they were no longer being actively opened in draft. If SOI and EMN follow this same pattern, then this will confirm the original hypothesis, that foil mythic rares represent a good long-term store of value and are bound to rise over time.

With all this in mind, I took the opportunity this week to put two different foil mythic rares in the portfolio. The one I want to focus on is Decimator of the Provinces from EMN.

I managed to find two copies of this card for under 5 tix. Long-term, the buy price on this card will be at least 5 tix if the foil prices from SOI are any guide. As a long-term speculator, this means my risk of buying this card is zero. However, the short-term upside is substantial as I believe there is a small chance that this card sees play at the upcoming Pro Tour.

When Seasons Past decks were featured at Pro Tour Shadows over Innistrad, that card quickly rose in price and I was able to sell my foil copies for over 10 tix. This is the potential path for Decimator of the Provinces heading into Pro Tour Eldritch Moon. That being, a card that has seen very little competitive play up to this point getting a considerable amount of exposure and still being in short supply.

With zero long term-risk and a small chance at a short-term upside surprise, buying foil versions of Decimator of the Provinces for 5 tix or less is a no-brainer speculative strategy.