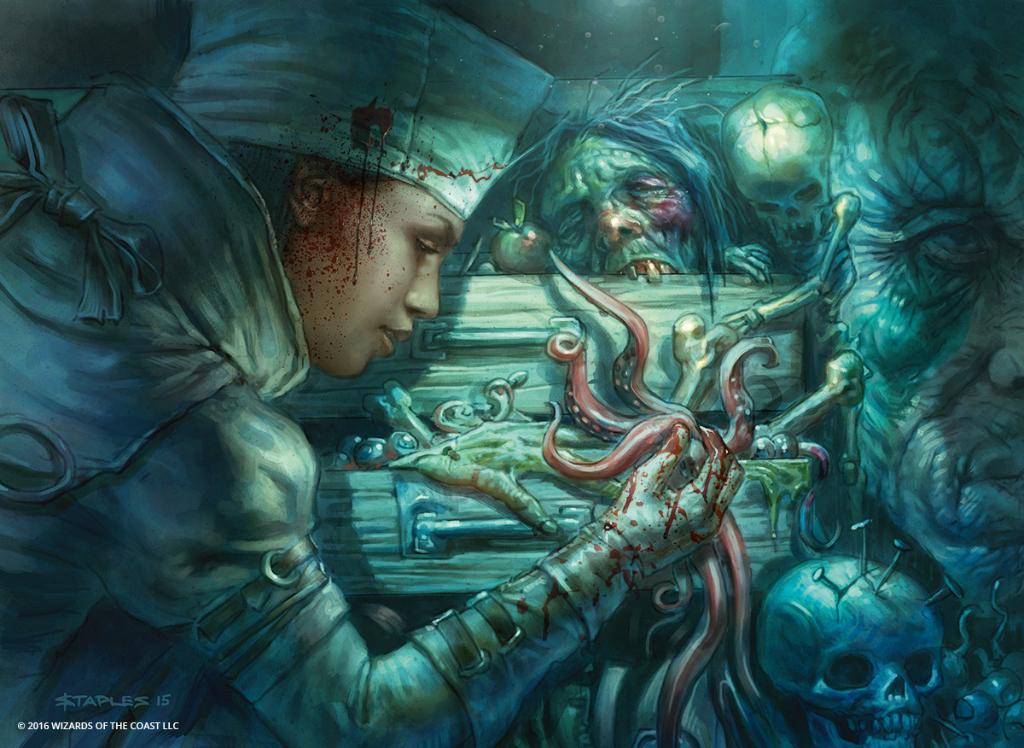 I made my way out to the Star City Games Open in Indianapolis this weekend with one goal, and that was to draw a bunch of cards. In testing new Standard, it was obvious that there were great artifact aggro options with Smuggler's Copter and Key to the City, though as it became clear that everybody had these decks I was much less excited about playing them. Instead I started messing around with Thermo-Alchemist and gave in to my strong desire to cast Take Inventory. This is the list that I registered:

As I said on Twitter many times over, maindecking Fevered Visions was a mistake. There are matchups that it wins on its own, like it did in my feature match against Orzhov Control in round two, though there are other matchups where it's a liability. I think that you can reasonably gain parity and cast it against the Boros Aggro decks, though against burn-heavy Rakdos builds with Unlicensed Disintegration casting the card at all will most likely lose you the game. I played against five Unlicensed Disintegration decks throughout the tournament, and while I found a way to board and play patterns that felt even-ish post board by the end of the tournament, I was only able to take one of these matches. I ended up 9-6 in the event, finishing outside of the money. My other two losses were to one of my Boros opponents and a Bant Midrange deck, and in both of these matchups I bricked on a significant number of my draws.

While Fevered Visions served as more of a liability than anything, Take Inventory was phenomenal, and Bedlam Reveler over-performed. Most of my opponents were on Smuggler's Copters, so the game plan was just to kill their early creatures, pull ahead in cards, keep killing their creatures and eventually turn the corner. I only felt disadvantaged against aggressive decks in game one, and felt like I was likely favored in three-game sets against Boros, while slightly unfavored against Unlicensed Disintegration.

If the metagame continues to be aggressive, which it likely will at least until the Pro Tour, then I would plan to move Fevered Visions to the sideboard. I would add the third and possibly fourth Lightning Axe to the maindeck given how important cheap interaction was, and maindeck at least three Bedlam Reveler. This deck has the capacity to outpast the aggressive decks with fast Thermo-Alchemist draws, though mostly you're just trying to play the control by trading one-for-one aggressively and then finding avenues to fill your hand back up. Opening hands that featured the combination of Lightning Axe and Fiery Temper or two Galvanic Bombardment would often make for easy games against Boros, and maximizing this line seems wise.

Most builds of this deck pre-rotation featured Geier Reach Sanitarium, though in testing I felt like it benefited my opponents at least as much as it benefited me. There are plenty of other Fiery Temper decks out there, lots of Scrapheap Scroungers, and heaven forbid that your opponent is playing Prized Amalgam. As such, I was more into jamming a bunch of Tormenting Voice, which is just a better Fiery Temper enabler, and an effective tool for accelerating Bedlam Reveler. An interesting line of play is that you can use Tormenting Voice to discard your first copy of Take Inventory or Galvanic Bombardment in order to get better value out of your other copies.

Collective Defiance was once a four-of staple in these decks, though the format is much faster now, and three/four mana removal spells are far from ideal. I kept two copies of the card in the deck because the ability to wheel your hand when you get flooded felt too valuable to cut entirely, though I could see playing with this slot. Given that many of my game losses had to do with drawing too many lands, I could see cutting another land which slightly reduces the need for Defiance.

I think that the sideboard would benefit from one or two Harnessed Lightning to deal with opposing Smuggler's Copters, though for the most part my sideboard felt justified. The glaring exception here was Chandra, Torch of Defiance. Every time that I boarded Chandra in it felt like a mistake. She is likely a reasonable tool against control decks, and if Kalitas, Traitor of Ghet is around I like having her in the 75 to fight that battle, but any other matchup where you want the -4 she basically just trades down. She was pretty solidly underwhelming. I fully expect Chandra to continue decreasing in value.

The applications for most of the sideboard is obvious, though the Hanweir Garrisons may look odd. Basically they are another way to apply pressure against things like Aetherworks Marvel/Panharmonicon combo decks as well as control decks where threat density is important. I don't think the slot is super important, and for now I would say they're not necessary.

Overall, I had a blast playing the deck, and think something similar could be very good in the current Standard format. Take Inventory is absurdly underrated, and I cast the fourth copy in multiple games this weekend to great effect. I see a future in this deck, and I believe that future lies on Bedlam Reveler's shoulders.