Last week was undeniably a very good one for my bankroll. After two months of mixed or clearly disappointing results I closed half a dozen positions for over 600 tix in benefits. Only the Oath of the Gatewatch boosters I sold were negative—just one of the eight positions sold last week—a rate I hadn't see in far too long.

Modern prices have not fully recovered, but we're entering a period of likely gains beginning with the filled-to-capacity Grand Prix in Dallas. Things should get much better soon for Modern speculators. A lot of specs are already doing better now; almost all of my most recent Modern picks are up, and I've even sold a few of them, as you'll see below. I'm also trying to be more conservative with my objectives, which has the double advantage of closing specs faster and with a higher rate of success.

The positive trend in Standard has also continued this past week. Singles, foils, full sets and boosters were on the sales menu, at excellent profit margins. The value of an Eldritch Moon full set is nicely mirroring the trend we observed for Oath of the Gatewatch, amounting to, finally, a great full set spec.

On the topic of full sets, Battle for Zendikar is about to make a improbable comeback. As you read these lines I might even be in a position to sell my BFZ sets for more than what I (over)paid. A month ago BFZ sets were valued a 49 tix; they are now over 72 tix and firmly on their way to top the 78.5 tix record established last June.

Let's look at all of this in more detail; all the moves I made last week are summarized in the portfolio snapshot. 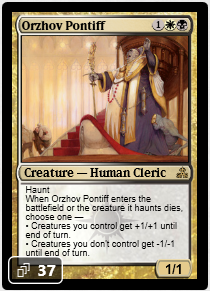 Once a silver bulet in the almighty Pod deck, and omnipresent in the sideboard of WBx decks, the competitive applications of Orzhov Pontiff are currently near zero. At 1 tix earlier last week, a two-and-a-half-year low, the price of the Pontiff totally reflects its weight on the current Modern metagame.

When nobody wants it is exactly when I want to buy it. It might take a few months for this card to spike again at 5 tix or higher, but as long as Orzhov Pontiff can dodge a reprint in Modern Masters 2017, the potential remains. I'm ready to add a few more playsets if the price gets lower again. 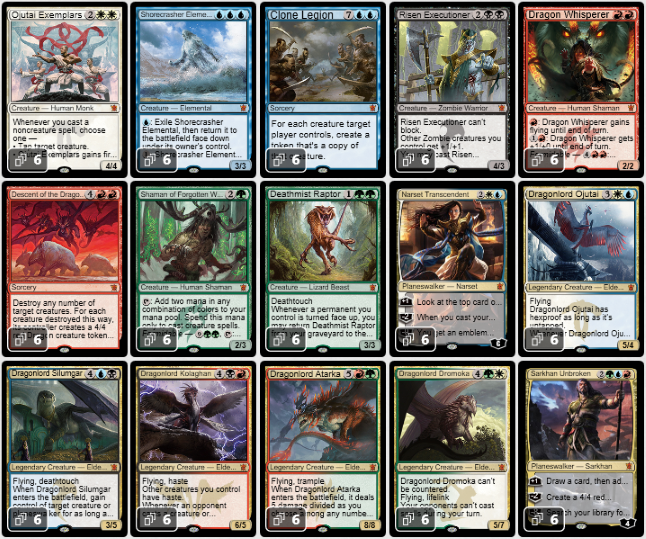 A second round of Dragons of Tarkir full sets. I'm in for six more full sets for a total of sixteen now. The periodic rise and fall of Collected Company is what creates the little oscilliations we see for the online price of a DTK full set, while the paper is still dead flat at the moment.

November and December are usually when freshly-rotated sets start to rise in price again. Let's see where DTK can go from this extremly low price tag for a third large set. 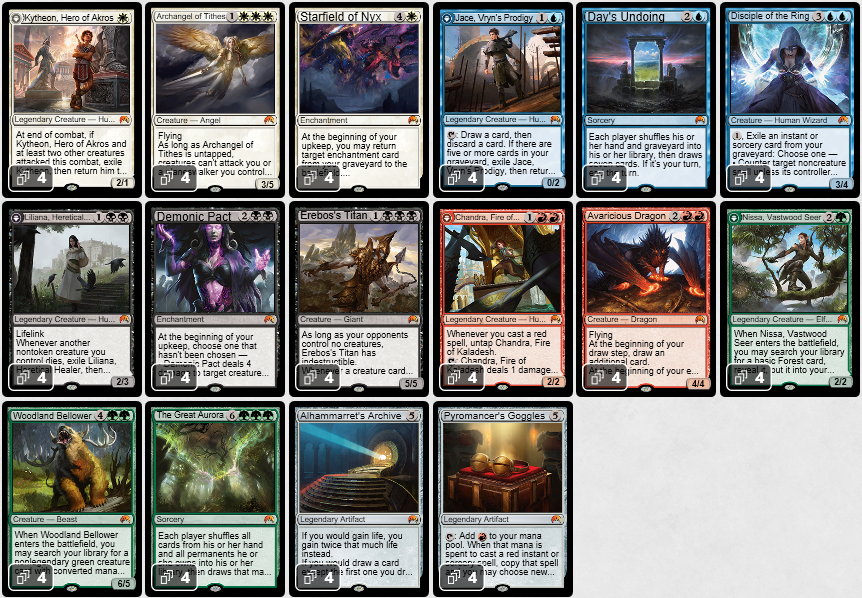 I'm also in for four more Magic Origins full sets. Unless prices significantly drop further, I think I have what I want for both ORI and DTK full sets. The four other core sets with complete records (Magic 2012, 2013, 2014 and 2015) show an increase in their full set value between January and April after their rotation out of Standard. With most of the price hike happening in January, that is my time target to sell my ORI full sets. 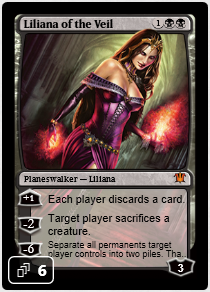 Innistrad flashback drafts end this Wednesday. Following these two weeks of flashback drafts, this iconic version of Liliana fell from almost 100 tix to 70 tix, a bottom she hadn't reached since January 2015.

Liliana of the Veil has been very consistent price-wise for the past three years, despite Jund falling in popularity in Modern. With several Modern events lining up for the next two months, I'm betting Liliana of the Veil can regain 15 to 25 tix in a short period of time. That could represent a middling gain from a percentage point of view, but this is an opportunity to make around 100 tix with only a playset and a half of cards traded.

As Dredge rises in popularity in Modern, weapons to fight the graveyard-based strategies do too. I bought this Leyline back in September after Magic 2011 flashback drafts and I think now is a good time to safely withdraw from the position with a comfortable profit.

Leyline of the Void is very close to its record high. I would rather sell now than be caught by a disappointing Dredge performance during Grand Prix Dallas or, more likely, by an innevitable adjustment of the Modern metagame.

Collected Company is certainly here to stay in Modern, as the card is extremly powerful and flexible enough to be included in several archetypes. Even if I do believe that Company will have a trajectory similar to Cavern of Souls, the road will be bumpy and the price will most likely cycle up and down a lot.

For now, I'm fully satisfied doubling my bet on a position I bought not even a month ago. I'm certainly ready to buy Collected Company again if the price comes back down closer to 7 tix. 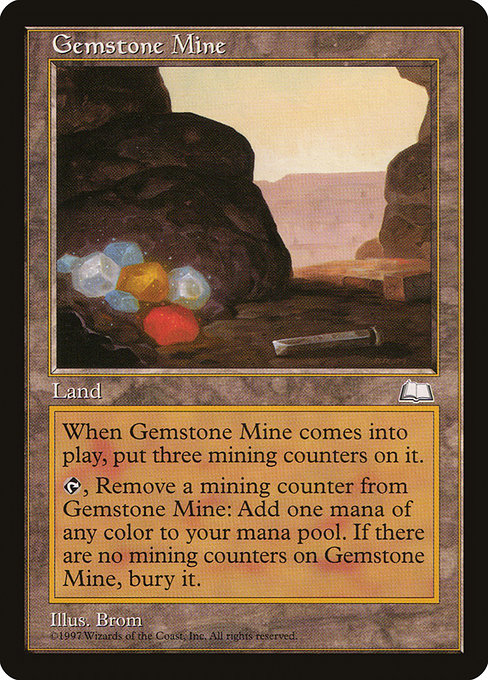 In the vein of Leyline of the Void and Collected Company, I sold the rest of my Gemstone Mines because I considered them to have done their job. There's still a potential for 2 or 3 more tix, but the card would need to go to the top again.

I was only in for this spec to take advantage of the sharp dip that Mine experienced two weeks ago. After a lot of disapointment in Modern positions in these past two months, I'm more looking to secure profit than take risks. 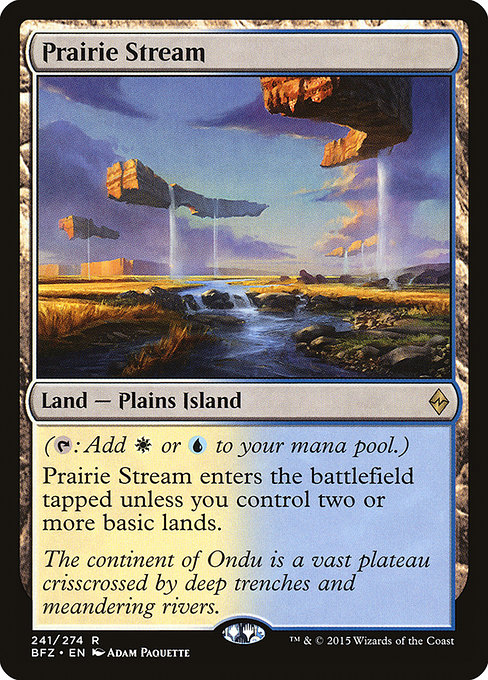 Standard can be very volatile and opportunities may not present themselves twice. Not only did I buy this BFZ land at a higher-than-ideal price, but I also missed two decent opportunities to get out in April and August. I could not seriously decline another opportunity to sell my Prairie Stream for a good price.

If the hits and misses with my enormous ORI painland spec taught me one thing, it's to try to close the majority of large positions whenever possible, without constantly asking for more. You never now how long a price hike will last or whether another will occur. A 48% profit on 100 copies of a 300-tix position sounds like a good number to me. 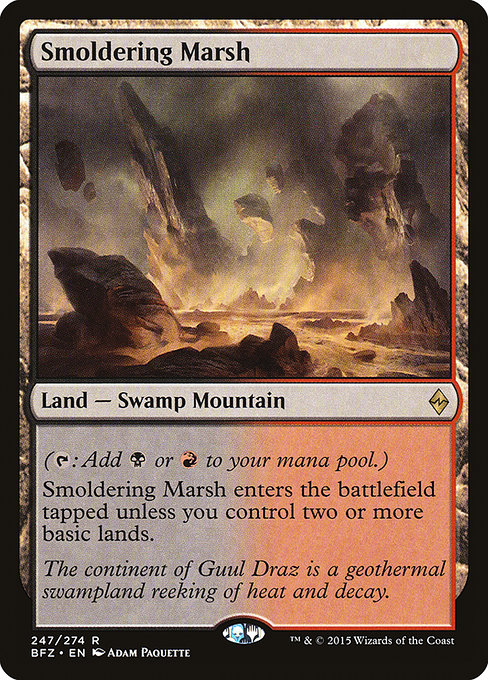 I also sold 35 more copies of the black-red BFZ land this past week. With only 18 copies left to go, the price of Smoldering Marsh has gone back to 2.5 tix. Will it head back in the 3 tix range? That's exactly what I just talked about. It may have been safer, faster and better just to sell everything here while I could do so around 2.8 tix. 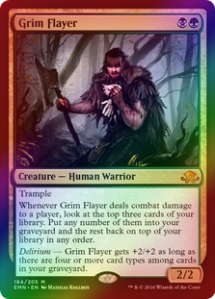 Although it's always a few tix behind, the foil version of Grim Flayer is naturally following the trend of its regular counterpart. The ceiling seems to be 25 tix for the regular version at the moment, while the limit for foils is suprisingly only 21 tix.

Having taken little to no risk on that spec, I sold my last two copies of foil Grim Flayer for 18.8 tix each, closing this position with an average profit of 120%. That's all I needed here. 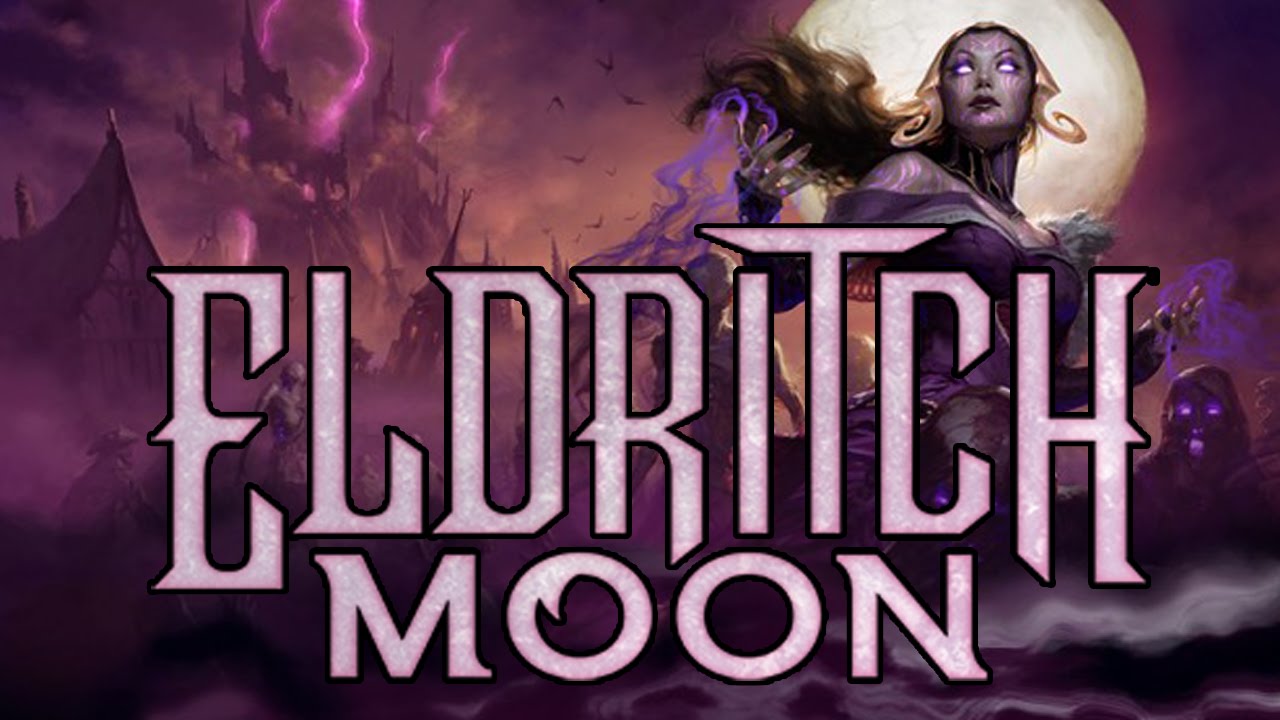 Finally a largely postitive speculation with a full set. As anticipated, Eldritch Moon follows in Oath of the Gatewatch's footsteps in terms of price trend, with the price of an EMN full set rising from 90 to 138 tix in less than a month.

If EMN prices are not exactly the same during comparable periods (OGW was around 75 tix before the SOI release and rose to 120 quickly afterwards), the price evolution in terms of percentages is analagous. And if OGW is any indication, there's not much else to expect from EMN full sets. That is why I decided to sell my EMN full sets now to move on to something else. 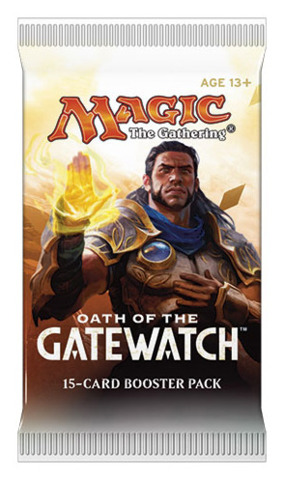 Along with BFZ boosters, I have no hope of closing OGW boosters with a profit. As they are doing a little bit better pricewise than a month ago, I'm selling part of my stock a little bit at a time. Still very far from the 3-3.5 tix price range I wish they were in.

The next two months should be interesting because both Modern and Standard prices should rise, but fairly boring at the same time because nothing very special should happen. I'll try to sell my BFZ full sets at a profit and jump on any Modern opportunities—that's as targeted as my goals can be for the next few weeks.

There is one thing I'll look at closer to see if it promises any speculative opportunities: mythics from DTK and ORI.

These are two large sets from the second part of the Standard season. In the past, certain third-set mythics with both casual and competitive appeal have provided nice returns on investment if you were able to pick them up early enough. Sliver Hivelord, Athreos, God of Passage, Ajani, Mentor of Heroes, Avacyn, Angel of Hope, Entreat the Angels, Gisela, Blade of Goldnight, and Kalonian Hydra are examples of this trend that could be exploitable.