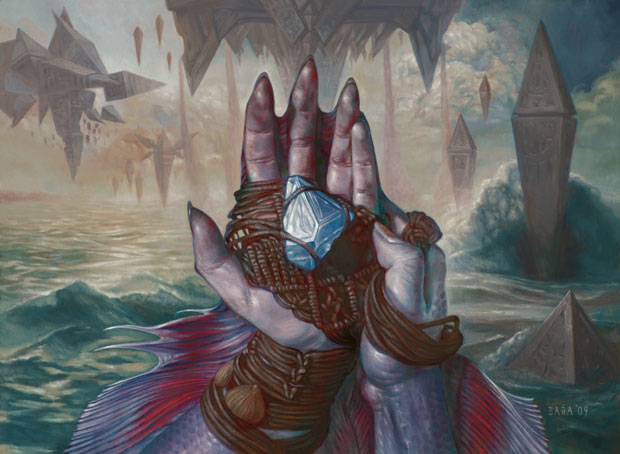 Hey there! I don't deal with high-end cards a lot, so I'm gonna throw a little disclaimer up front before I get going. If you're an experienced vendor, backpack grinder, or someone who frequently deals in high-end Power/duals/Old School stuff, please forgive any ignorance of mine when it comes to $1,000 cards. I'm used to owning 10,000 cards that are worth a dime a piece, not condensing them all into a single piece of cardboard. It's certainly a learning process that I'll get better at as I deal with more high-end cards, even though there's very few in my local area.

So with that out of the way, let's make a 180-spin away from foil Merciless Evictions and talk about a more interesting card that I picked up tonight.

I received a text this morning from a friend of mine who I deal with frequently, asking, "How much would you pay for a NM Unlimited Mox Sapphire? Literally unplayed." Normally this person brings me "normal" cards, for a lack of a better term – the usual stuff. Bulk rares, Modern cards, the occasional dual land. Neither of us deal in power on a regular basis.

I was interested, albeit skeptical. We all know how incredibly rare NM power is these days, but I would be happy to buy it regardless of condition. I gave him my cash number, and we worked out numbers on a few other Unlimited cards he had picked up (Volcanic Island, Winter Orb, and Badlands). Sounds like a good time. We met up later that night, and the following tweet helps detail what happened next. 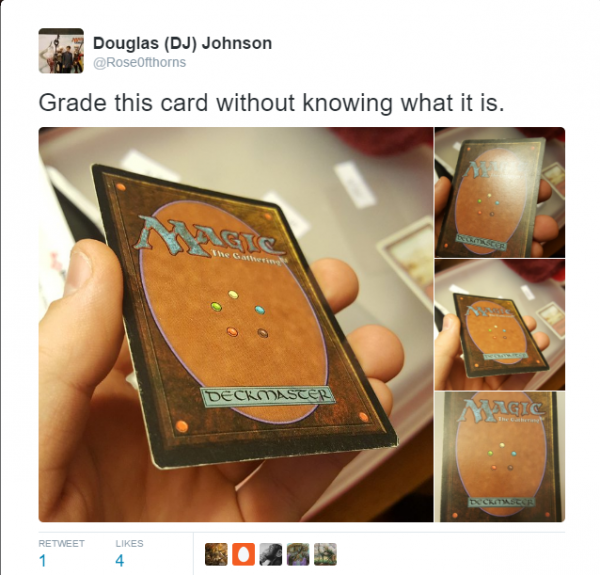 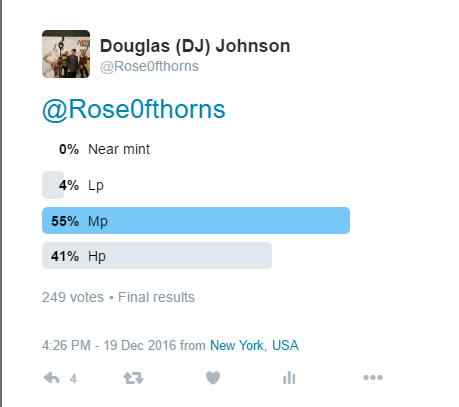 It certainly wasn't NM like I was hoping for, but we had a disagreement on the exact condition other than "not NM." I felt like it was on the razor's edge between MP and HP, and he argued for LP. I posted a quick poll accompanied by these pictures to make sure I wasn't going crazy, and found solace that my grading was reasonably accurate. If the original tweet is unavailable to you, here are the same four images close-up. For those of you who are saying, "I can't grade it until I see the front," I'll just let you know that the front didn't make the condition of the card any worse. It was really nice on the front, which is where the miscommunication as NM came from. 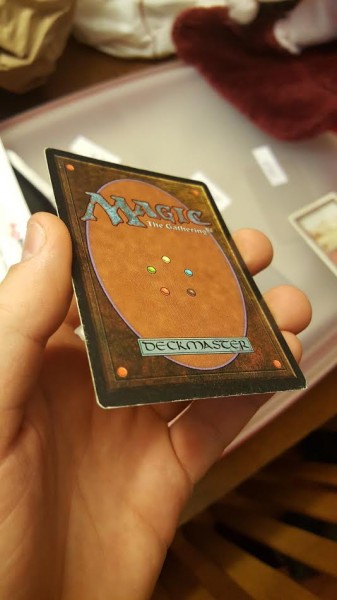 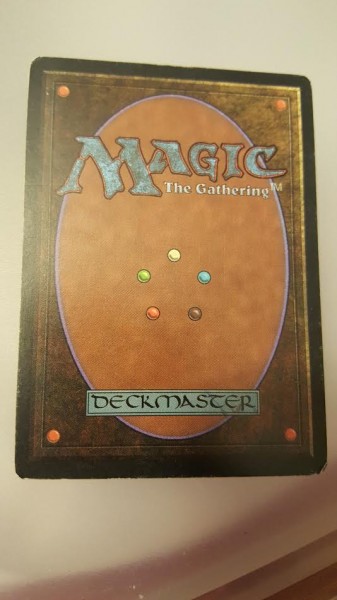 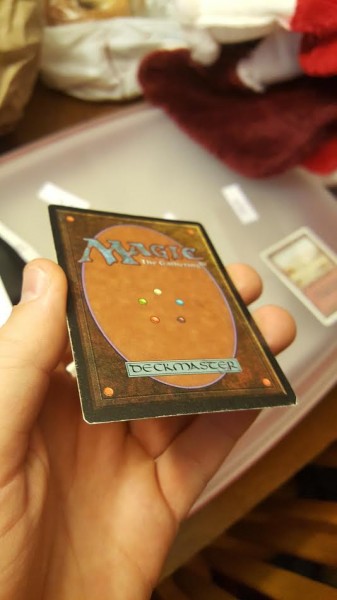 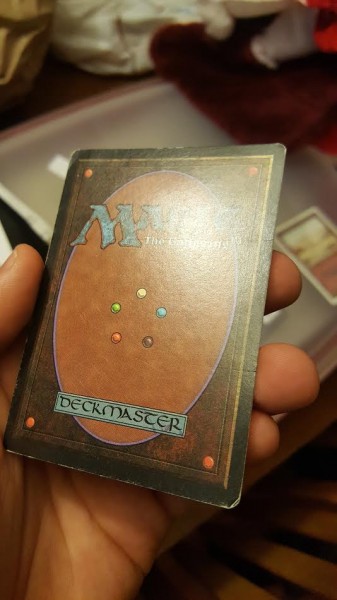 My friend was selling it on commission for the person whose collection he found, so we had to wait for a text message back from the person to see if the changed numbers were okay. We eventually settled on a number that made both of us happy, and the other UNL goodies were much easier to reach a number on because they were obviously NM or HP.

If you're reading this and thinking, "Wow, DJ really just wasted an article to brag about buying one of his first pieces power? What an asshole..." then hold on just a bit longer. There is a point to all of this that we can learn from, and it was brought up by Edward Nguyen, a buyer for Kirwan's Game Store and someone you should absolutely follow on Twitter.

For most of us who deal with medium- to low-end cards, we have a grading structure that firmly attaches to a price percentage difference. What I mean by that is NM cards are obviously worth 100 percent of their true value, other factors aside. LP cards are a 10 to 15 percent discount, MP is 20 to 25 percent, and HP is around 35 percent. Those are really general numbers, but you get my point. We understand that a HP $10 card is going to sell for around $6, maybe $7. When cards get into the $1000 price range, there starts to be more wiggle room. An HP shockland is an HP shockland, no matter how you slice it. The price difference between the "close to MP" HP Sacred Foundry and a "yep this is definitely HP" Sacred Foundry will only be a dollar or so, if that.

The results for my poll were really close to a 50%-50% split between MP and HP. Half of the respondents would be okay getting that Sapphire as MP, and half would be upset and grade it at HP. I was finding it really difficult to toe the line, and it's almost always better to grade down in a situation where you're unsure of what the exact condition is. If I grade it as HP, I have close to a zero percent chance of someone messaging me via Twitter, TCGplayer or eBay and saying, "Hey man. This card is too heavily played, even though I bought it at HP."

The normal downside to doing this, of course, is that I'm pricing my (possibly MP depending on the buyer) card at HP prices. Ed's solution to this is elegantly simple. If I list the Sapphire as a heavily played card at closer to an MP price, it's easier for the buyer to look at it in person and see that it's better than the other HP copies. Granted, Ed is a vendor at Grand Prix, and this method works a lot better when the other party can see all of the heavily played cards in your stock while comparing prices. It's harder for someone on TCGplayer to determine card condition, because they obviously can't see it.

The overall lesson here is that the old staple of NM/LP/MP/HP becomes increasingly less useful as the value of the card increases. When we get $1,000 pieces of cardboard on the table, it's really not very useful to be restricted to a single grade out of four with an automatic percentage point. This might be ancient news to those backpack grinders and vendors out there with stacks of Moxen in their display case, but this was only the third single Magic card worth over $1,000 that I've ever owned personally.

Has anyone else noticed that Rhystic Study has quietly doubled over the past year? I haven't seen anyone talk about it at all, and I didn't even really give it any consideration until I realized that I was sold out at $6 on TCGplayer. Foils are still running at around $20 for Prophecy and $17 for Commander's Arsenal, and I'm really tempted to pull the trigger on buying a bunch. I'm wondering if the closest spot we can expect to see a reprint is in the upcoming Archenemy set, because it certainly fits a "one versus three" environment, but even then foils will be safe. Hmmm...

Thanks for reading today!