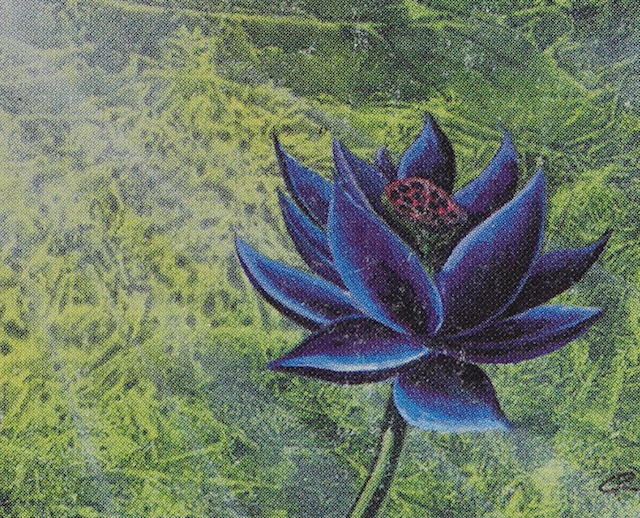 Yes, I know there are Modern Masters 2017 previews. Do I care about them? Eh, kinda. The set is jam-packed full of value, and a whole lot of the cards in the set  are going to crash. Thankfully, your QS Insider sub gives you access to a whole pile of excellent writers who are going to write about that instead of me. 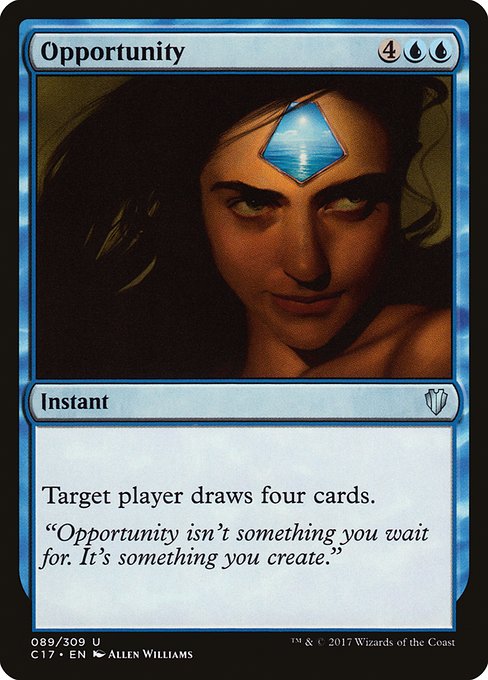 Instead, I'm going to spend this week updating you all on that Black Lotus from before, if you couldn't guess from the title. I wanted to go with something about Yawgmoth's Will and re-casting the Lotus because this is the second article about it, but I couldn't pull it together. I'll probably write a third article in a month or so to complete the trilogy, but we'll worry about that when we get there.

Remember the old school guru I mentioned in my last article, Dave Smith? I got to spend about an hour on the phone with him this past weekend, and he really helped me break down what I need to know about sending in this flower to get it appraised by the folks at BGS.

We talked the benefits of choosing BGS over PSA, about the costs associated with shipping and of course the how of shipping a $5,000 card to make sure it doesn't have the slightest possibility of getting damaged. The most expensive card(s) I've shipped prior to this deal was probably a half dozen Revised dual lands totaling $1,000, so I am quickly scaling up into a world I'd never ventured into here.

Thankfully, Dave's knowledge and kindness were essential to explaining what the process would look like. After carefully sealing away the card to make sure it would take the folks at BGS at least a half-hour to look at, and an $80 post office bill, the card is officially in the aether.

Let's break down some of the things I've learned.

I mentioned last week that there were two well-known companies who grade cards. BGS (Beckett Grading Services) and PSA (Professional Sports Authenticators). I really didn't know what the difference between these two was, so Dave used small words to explain it to me. Based on our conversation, I learned that BGS was far and away the more reliable place to get my stuff graded. The cases they use to seal cards in are stronger, and require significantly more effort to crack open if you really want to release your Lotus back into the world of sleeve-playable cards. The plastic cases that PSA uses are supposedly pretty flimsy, and "I could probably snap it open between my fingers," said Dave. As for the BGS cases: they're hermetically sealed (that means airtight), and require pliers and a screwdriver to open. That's definitely what I'm looking for. If BGS is the more respected option between the two when selling multi-thousand dollar cards, then that's where I'll go. I think I'll trust the guy who's had dozens of references and who has been doing this longer than I've been alive.

Okay, so I picked BGS. Based on the photos I sent him of the card and my own analysis about the condition, we figured it would be getting at least an 8.5, maybe a 9. I'll repeat from last week that I'm not an expert when it comes to grading centering or knowing the exact decimal point a card should get. However, we agreed that it would definitely be worth the costs of shipping it there and waiting to see what it gets. I'm not in need of an emergency quick flip for cash, so it's worth it to spend a single-digit percentage of the total value of the Lotus if it ends up increasing the value by 10 or 15 percent when I'm trying to sell it.

What It Costs for Grading

So where do those couple hundred dollars in costs come from? How much exactly does it cost to get a card graded by the folks in Texas at BGS? Well, I'll let you look at my packing slip first. 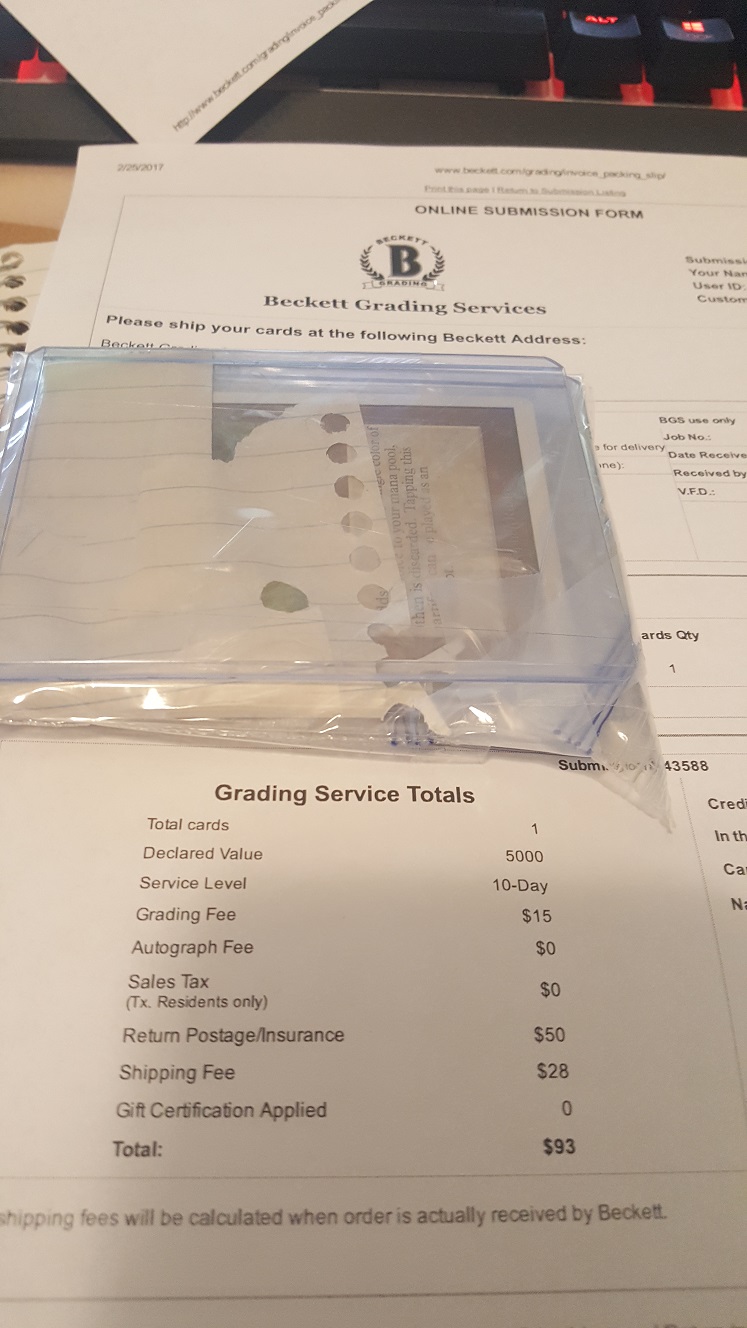 Dave was really patient and helped me out with the entire process step-by-step, and I hope that this article will help you to do the same if you happen to come across this as a first-time buyer of Power or are looking for answers as to how to get your valuable NM card locked away in plastic.

You'll notice that the actual "grading fee" is only $15, which seems really cheap considering the actual value of the card. And it is.

However, the real costs to you are shipping. Both ways. If you're moving something this expensive, you want to make sure it is air-freaking-tight. Waterproof. Hailproof. Bulletproof. You want to be completely at ease, and reduce the chance of getting that dreaded email or phone call saying, "Oops we lost/damaged your package" to Z E R O.

If you just happen to have a bunch of Lotuses or Beta Power lying around, I'll drop the link to Beckett's online submission form. You'll have to make an account first, but that only takes a few minutes. They'll ask you how you want it shipped back, how much insurance you want on it, and how quickly you want to expedite the service. The services range from 2 business days to 45 business days, but Dave explained that the 45 day service really ends up being closer to 90 after all the days in transit and non-business days that go by. While it's by far the cheapest option at around $10, it only costs a few more dollars to expedite to 10 days. Seems fine with me.  With the FedEx cost of shipping ($28), insurance ($50), and the grading itself ($15), my total came to $93.

Insurance costs $10 for every thousand dollars you want to value your package at. Some of you probably already knew that from your day jobs or shipping non-Magic stuff, but I didn't, so I'm putting that bit of information in. While I'd be happy selling this Lotus for $4,500 or even just a quick flip at $4,000, I really want to see if I can leech as much value out of it as I can. Even if I have to wait a while to find a buyer on the High End Facebook group (the best place Dave recommended to sell this kind of thing), it'll certainly be an achievement to turn a single piece of cardboard into a semester of grad school tuition plus my trip to GP Vegas. After the $93 here and the $80 shipping bill at USPS, I'm looking at around $170. I could have cut that down a little bit by using a smaller flat rate box or bringing my own bubble wrap, but c'est la vie. Live and learn. You know how it goes.

In the above picture, you can see a few of the packing elements that went into shipping the card. You've got your standard penny sleeve and toploader, and we added a piece of paper across the top before adding any tape. After that, I put the card in a team bag and sealed that, followed by an actual ZipLock bag, for waterproofing. That's what you see above, but I wasn't done. I complemented that by sandwiching the card in between two more toploaders, and wrapping that in some actual shipping tape for security.

After this, the armored lotus went into one of those smaller BCW white boxes; the ones that only hold 200-400 cards. I filled that BCW box with paper and stuffing before giving it a mummification in shipping tape, and then brought my parcel to the post-office to load into a medium flat rate box. After buying some overpriced bubble wrap and using the entire roll on that medium flat-rate box, we had our finished product.

Part three will come when I get the Lotus back from its trip to Texas and check out the grade. I'll be happy with an 8.5, but ecstatic with a 9. Even if Dave and I missed something crucial and it only gets a 7.5 or 8, there's still the value that comes with the card being authenticated and proven to be real.

I've learned a lot about Power in the past couple of months, and the resources and connections I've grown friends with across various social media platforms have helped immensely in doing so. If you ever want to chat up Dave about Old School Magic or Vintage, feel free to hit him up; he was an absolute pleasure to talk to, and I'm hoping to write more about high-end stuff when it comes my way, however rare that may be.

Even if these articles don't help the majority of my readerbase turn bulk rares into collection empires, I like to think that I was able to afford the Lotus because of all the bulk rares I've sold throughout my life at 25 cents a piece. Keep it in mind. Thanks for reading!

One thought on “Insider: Lessons from a Lotus”