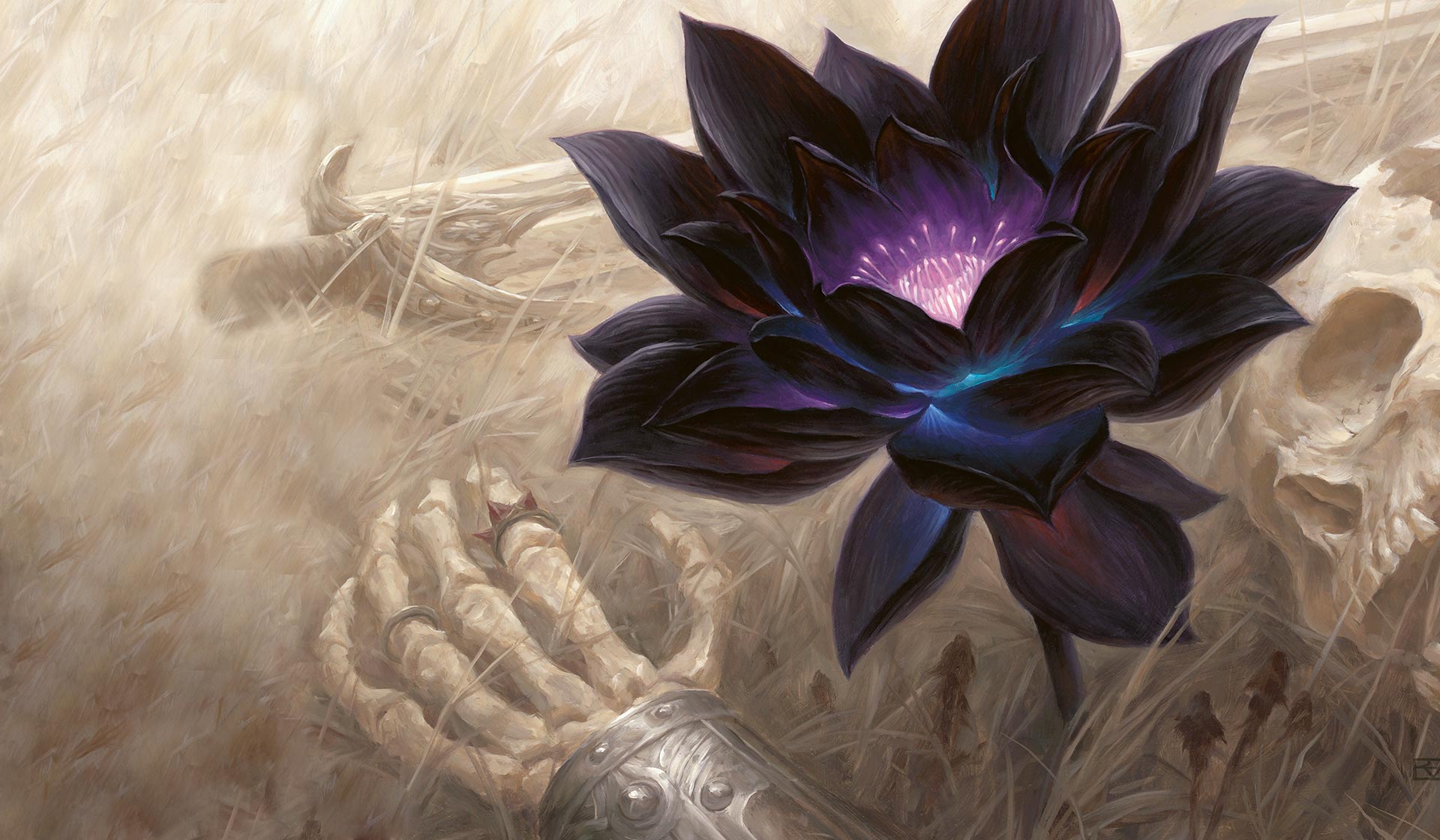 I hope these Black Lotus articles haven't been too polarizing. I recognize that some of you don't care at all about $x,000 cards, but I hope most of you have been entertained by my journey. For those in the former group, this will be the last article on the subject. For those in the latter group, feel free to follow me on Twitter, where I'll continue to talk about this stuff whenever I come across it.

As the existence of this article probably indicates, my Lotus came back. I stated in the prequel to this piece that I would be comfortable with an 8.5, and ecstatic with a 9. I didn't even consider the possibility that it would come back as anything greater than that.

I'll let this speak for itself: 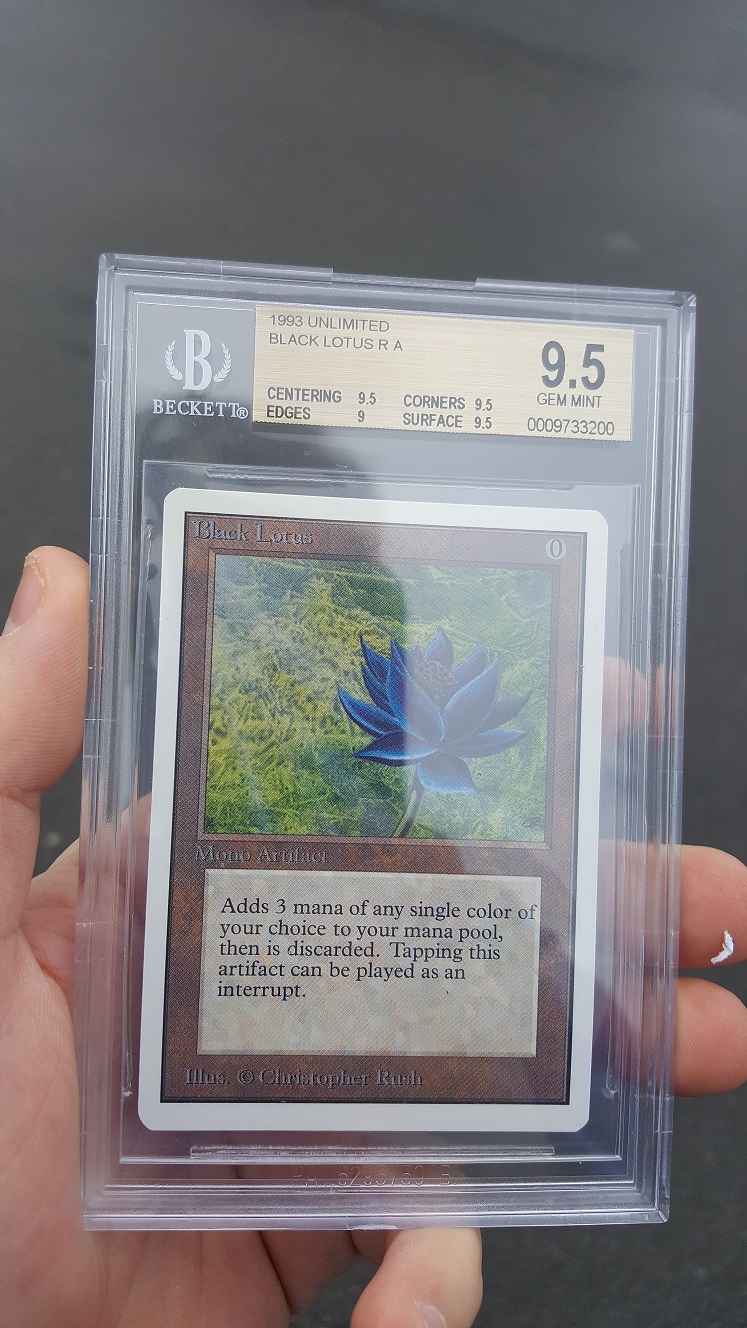 This changed everything. While I was originally hoping to get somewhere between $4,000 and $5,000, I'm suddenly looking at maybe double that.

I immediately messaged the person I got it from and let them know they'd be receiving a bonus as well when I finally managed to move it. Remember that comment last week about how being open and honest is the best policy? I'm friends with that person on Facebook, which is coincidentally where I'll be trying to move this Lotus. The last thing I want to happen is to start posting this on high-end groups for $8,000, and have my friend see that post and watch me more than double up on the Lotus that we both initially (and mistakenly) thought was LP because of our harsh scrutiny that allowed me to pick it up for $3,000 plus $250 in trade in the first place. The person this Lotus came from still has more Power waiting to be unloaded when they're finished spending the money from the Lotus, so I still want to maintain that relationship in the long term.

So let's talk a little bit about how many of these things are out there. I mean, Lotuses aren't exactly commonplace already, even less of them are graded, and an even smaller percentage receive a grade this high. My inquisition was rewarded when I was told that there exists a "population report" for all of BGS's graded products. I mean, that makes sense when I actually think about it, because it has a serial number and everything now, but I was pleasantly surprised when I checked out the pop report for BGS Unlimited 9.5 Lotuses.

There are 24 of these in existence. Twenty-four. While some may have been since cracked open and played with to decrease that number, there's a stark difference between the number of 9.0s and 9.5s that sets this gem apart from the rest of the pack. While there's no direct financial value correlating to this population report, it's certainly a bargaining chip on my side of the table when I'm trying to find a buyer. How often are you going to see one of these in the wild again? Where do you even find something like this on the internet to price check it?

Okay, so maybe that last paragraph was a little melodramatic. You can actually find two on the internet right now, and both are being sold by the two eBay powerhouses of Magic: Dan Bock and Dave & Adams. They're asking $8900 and then $9350, with wiggle room for a best offer. Those are the numbers that I'll obviously have to undercut by some degree if I ever intend to make a sale, but it's something I can work with. 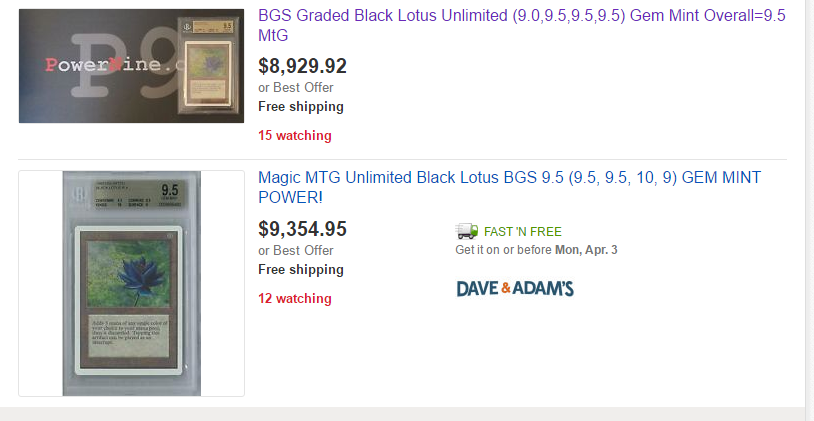 I don't have a realistic way to sell this on eBay and TCGplayer; the former because I literally have no experience selling on eBay, and the latter because you can't really sell graded cards. That leaves either locally (possible, but extremely unlikely) or social media. I'm almost definitely going to have to find a buyer on a high-end group and use the fact that I have a reputation with references at my disposal. I'll almost certainly take another hit on shipping when I find a buyer, but we're still looking at well over a $3,000 profit when everything is said and done. Maybe some QS Insiders are looking to pick up a nice 9.5 with all the money that this site has made them...? 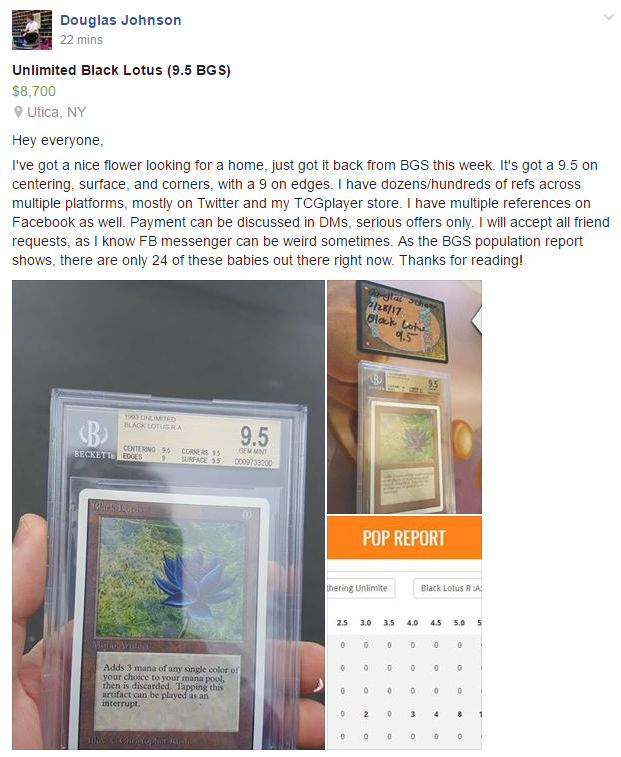 Here's the post that I made to all the various high-end groups that I'm in. I set my initial asking price at $8,700, but I'm obviously willing to negotiate that down. I just posted it earlier this morning, but the highest offer I've gotten so far is $7,000. That sounds like a snap deal considering the margins I'm working with, and I might take them up on it in a couple weeks if no one else bites, but every high-end vendor who I've asked for advice on this so far has suggested that I try to get at least $8,000.

Regardless how much I make, it's going right back into my student loans, so I can hopefully pay those off by the end of the calendar year. Thanks for reading!