If you’ve been reading my article series on Amonkhet, you know that I love this set. Before dismissing many of them, there were 44 cards that I considered for this top 10 list. That’s the most out of any set since I’ve been writing.

Everything is just so cool. We all love the card advantage of cycling, embalm is like giving your creatures flashback, the -1/-1 counters approach is an interesting take on this concept, and exert is interesting and challenging to decide when to use. The flavor of the set is also a home run in my opinion. The zombies are more like mummies, but being a zombie is way better than being a mummy, so it still synergizes well with other sets. The gods are all super cool too. Do you guys love this set as much as I do?!

My goal is to keep these choice descriptions short and to the point. Let’s dive into the top 10!

10. Vizier of the Menagerie 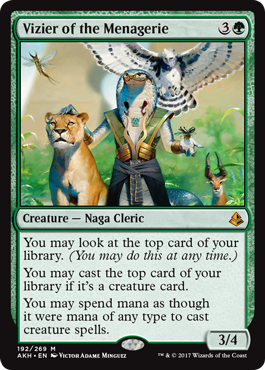 Wow! What a cool card. Garruk's Horde is awesome but costs seven mana. Vizier of the Menagerie has basically the same effect except it is costed for competitive play. Just like Oracle of Mul Daya, this Vizier could fuel a midrange creature strategy. Maybe this is the home for Angel of Sanctions? Either way, foils will be crazy high due to Commander demand. This should be a staple, included in every green deck. 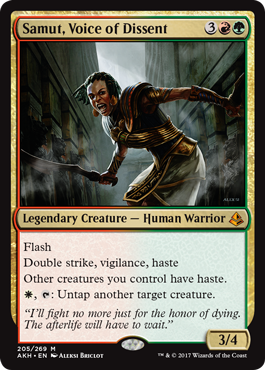 In my second prerelease deck, I got to play with Samut, Voice of Dissent. He is even crazier than he seems. You can ambush attacking creatures, use the flash ability to have your mana open for instants or just cast and attack on turn five. Any way you run it, this Gruul dude is like a Baneslayer Angel-quality mythic.

I know this is a five mana creature in red green, but he has to be worth more than the $3.50 he’s sitting at right now. I’m buying this guy aggressively at my store and I think you guys should be too. 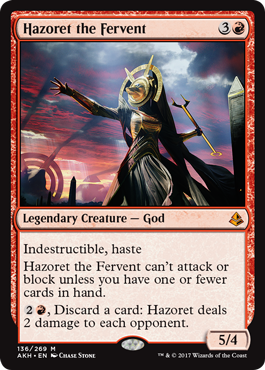 Hazoret the Fervent is looking pretty great for Standard and casual players. Dealing with the gods isn’t something most decks in Standard will be prepared to handle, especially with haste. Running your hand size down is a natural progression of the game for red decks and we can make it quicker with discard outlets too. I think the red god might show up in multiple strategies, which could bump his price up a bit. 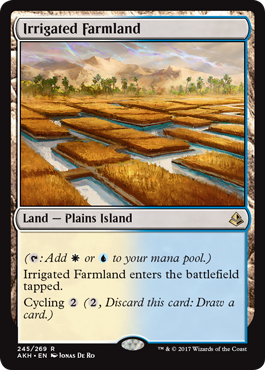 Originally I was going to have Zombies as one of the slots in the top 10, because Wayward Servant is a powerful card. After thinking on it, though, I think Servant is only contextually powerful, and so it slipped out of the top 10.

Instead, I decided on the cycle duals. These lands should show up in many strategies in multiple formats. Turning your lands into other cards in the late game is a powerful concept that every deck should want. Even if you only include two of these lands in your deck, you’ll be better off than not playing the lands at all.

6. Gideon of the Trials 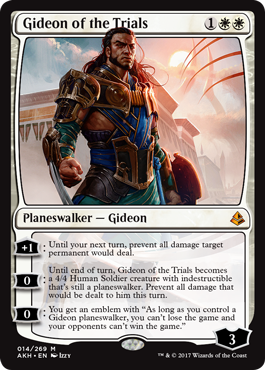 A lot of players I talked with thought that because we have this three-mana Gideon, Wizards was going to ban Gideon, Ally of Zendikar. That didn’t happen, so we get to play with them together.

My thought process is that if you are already playing four Ally Gideon, Gideon of the Trials makes a fine one- or two-of to pair with him. You might also not want to pay four mana for your white planeswalker, and then Gideon of the Trials is looking a lot more appealing because of the discounted mana cost.

I still think Ally Gideon is much better than Trial Gideon, but both should see play in the format. A price of $24 is still too much to be paying for this new three-mana ‘walker, though, so unless you need them for a tournament right after release, hold off until they drop to the $15 range. That should happen within the first few weeks, I think. 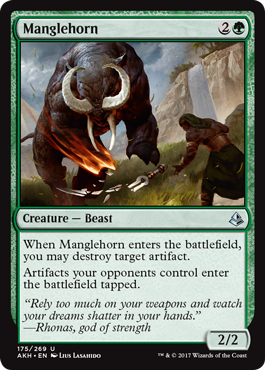 First there was Uktabi Orangutan, then came Viridian Shaman, and now we get a huge upgrade to this card template with Manglehorn. Not only do we get the artifact destruction, but future artifacts enter the field tapped. This is huge for not only Standard but Modern as well. Get ready to mangle some vehicles and Steel Overseers, because Manglehorn is coming. Foils will be money as well. 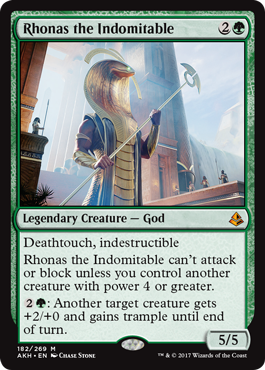 The most played god from this cycle should be Rhonas the Indomitable. He is the easiest to turn on for sure, especially with the creatures we currently have access to. Actually playing with him is enlightening as well: he’s just so hard to stop. We even have Blossoming Defense to protect him from the few removal spells that can deal with him. In Sealed, I was able to pair Rhonas with Cartouche of Strength – and giving him trample is sick. The green enchantment could see play alongside Rhonas because it pairs so well with him. I think he should sustain every bit of the $17 he already is priced at. 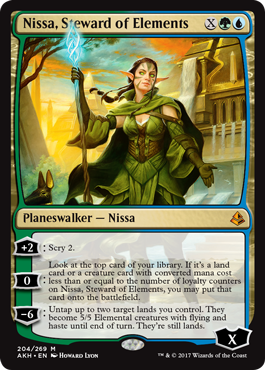 There has been a ton of hype around Nissa, Steward of Elements for Modern and Standard. She has one huge weakness, though, and that’s why I bumped her to number three on the list. She dies to three-damage burn spells, which are the core of any burn players’ strategy. If you are playing her, make sure to wait a turn until you have four mana so she doesn’t die right away. When we think of her costing four mana instead of three, I think her power level drops quite a bit. Simic Nissa is still amazing, and I wouldn’t be surprised if she gains some value from her $15 current price point. The invocations will definitely keep her price down, though, so don’t get too many copies. 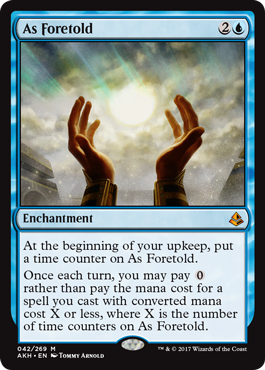 How many broken things can we do with As Foretold? The list is probably going to be long. I think this enchantment will form a new deck or different version of a deck in Modern, because casting your suspend spells for free is busted. We need some innovators to work with this card and break it, but it seems poised to be broken. Hold onto any copies you get of this card until we see what might happen with it. 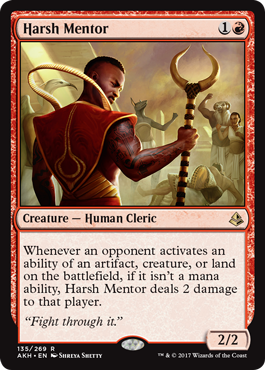 Not too often do I pick a rare as the number-one spot on a top 10, but this time around we have Harsh Mentor. This red two-drop is so efficient in dealing with so many strategies. He harshly taxes many strategies in Standard, Modern and Legacy, and his $30 foil price indicates that players in Eternal formats agree with me. I think he’s all-encompassing enough to be played main deck in Burn, Zoo or even Death and Taxes. In Modern, he might slide to the sideboard, but it’s certain he will see play in these formats because of how punishing he is towards certain strategies.

Not every player will get their copies of Harsh Mentor right away, so I think this guy could follow the same type of price model as cards like Stony Silence or Rest in Peace. The difference, though, is that he’s a creature, whereas those are enchantments. That could make all the difference in how much play he sees main deck as opposed to being in sideboards. I definitely don’t think he will go down in value though.

Alright, well that’s all the words I have space for today. Next week, I’ll be breaking down some boxes and providing you some card distribution data and analysis for this set in my latest Box Report article, so stay tuned.

Also, I started a YouTube channel using my twitter name MtgJedi, and I will probably record the box openings as well and upload those. So, check out the channel and watch some prerelease vlogs as well as other future content. There will be some videos about Star Wars: X-Wing and playing Pokemon Go with my kids, so if you’re into those games as well, content will be there. There will be fun videos for three different games, so check out the channel and let me know what you think.