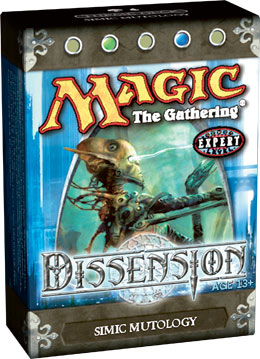 Hey there, you. In case you forgot, your Insider subscription gets you access to every single one of my articles. I want to make sure you maximize that value, so I'm going to post the link to last week's article just in case you forgot, or were busy, or whatever. I'm pretty proud of it, and I think it'll be really useful to you if you have more bulk than time to sort it all.

Now that the blatant self-promotion is out of the way, I've got another pretty spicy topic for you this week, regarding the Protean Hulk unban in Commander. Now I know Jason Alt wrote about it a bit and we talked about hulk on the Brainstorm Brewery cast, but I want to take it in a different direction entirely. 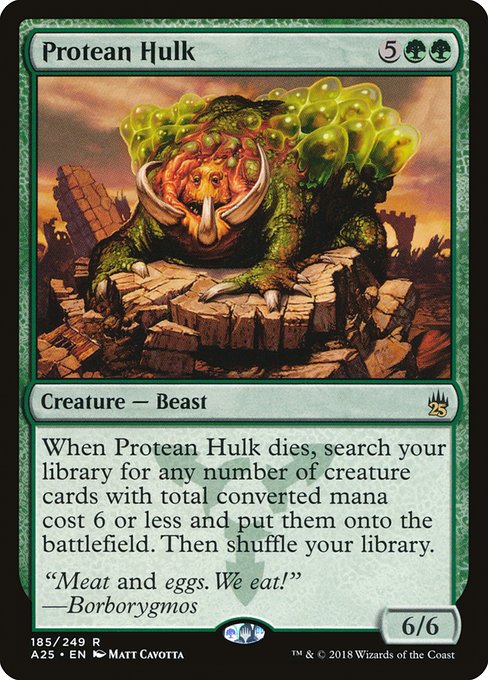 When you first heard Hulk was unbanned, what did you do? Most reasonable people probably went to TCGplayer and several other online retailers to check the stock available, and see if they could snag a multitude of copies on the cheap. TCG sold out almost immediately, so you were probably out of luck unless you ordered within the first 15 or so minutes of the announcement. Websites like SCG, CFB and ABU follow suit, as copies of the Dissension rare evaporate from the internet. Even being an hour or two late to the party can leave the hole-in-the-wall websites exhausted of copies, and you have to start hunting down copies at your LGS or suck up the new card price.

I'm here to present an alternative method that could have given you an advantage over all the scrabbling financiers looking to make a buck, especially if you're just using your Insider sub to pay for itself while making the game a bit cheaper for yourself. Let's start off with a simple question: did you know that there was another product you could open to obtain Protean Hulks without opening booster packs of Dissension?

They have the same set symbol, came from the same printing sheets and are virtually identical to their Dissension booster pack counterparts. Protean Hulk was actually in one of the theme decks from back in 2006. Some of you whohave been playing for less than a decade have no idea what I'm talking about, or you clicked on this link from Twitter and didn't see the featured image. So back in the day, intro decks didn't look like this: 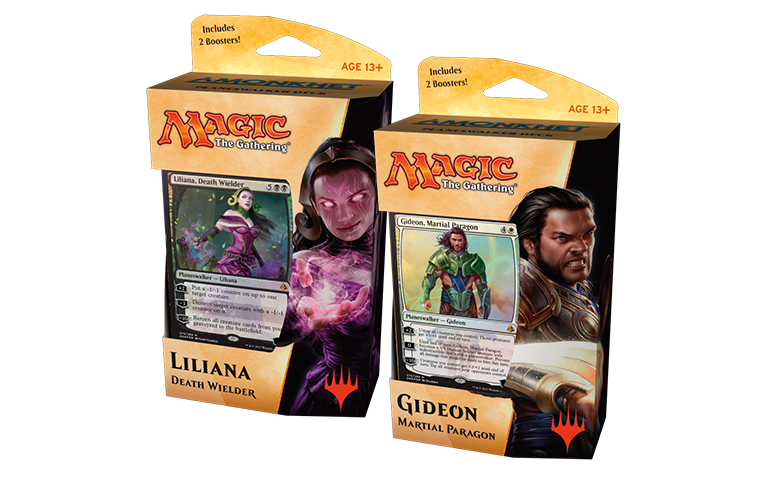 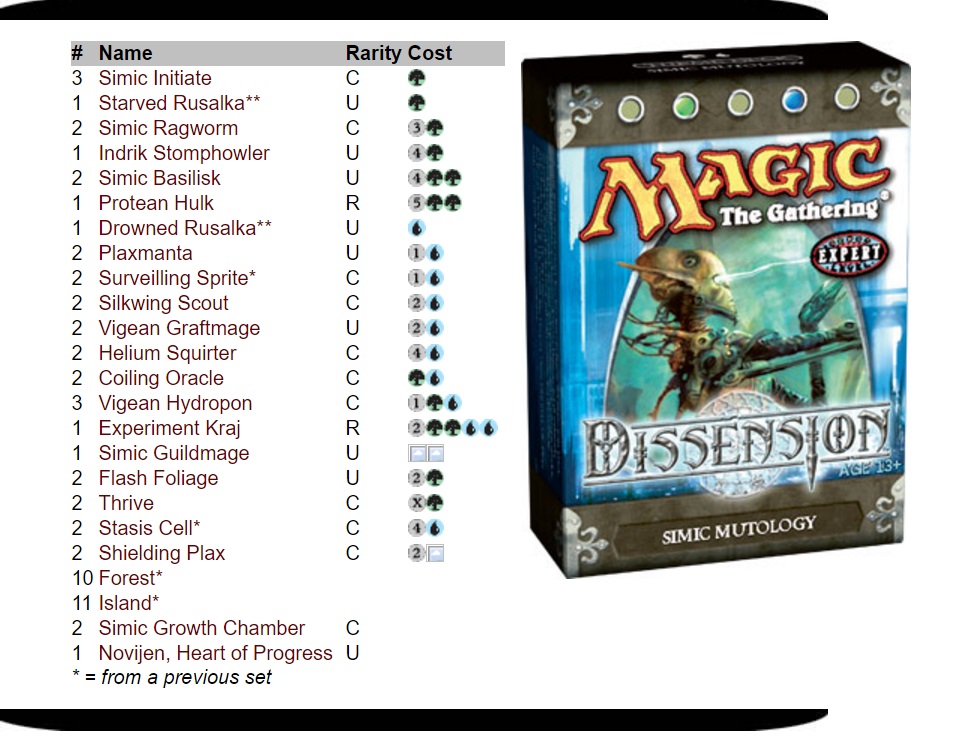 They didn't come with booster packs or planeswalkers (which didn't exist yet). They were an alright starting point to get into Magic; I personally started with the Selesnya one from Ravnica over a decade ago, with a few touch-ups from a friend who taught me the basics of the game. Anyway, the point is that these are relatively difficult to find nowadays, and most people probably don't know what's in each deck when asked. That's usually irrelevant because they're introductory decks, and therefore don't come with incredibly powerful or chase rares. Once in a while, though, something shifts in a metagame to cause a card inside to spike in price. Whether that's a new combo piece being printed, an unbanning, or a spicy new brew being developed, these older sealed products can end up being under-the radar-targets during a frenzied buyout. 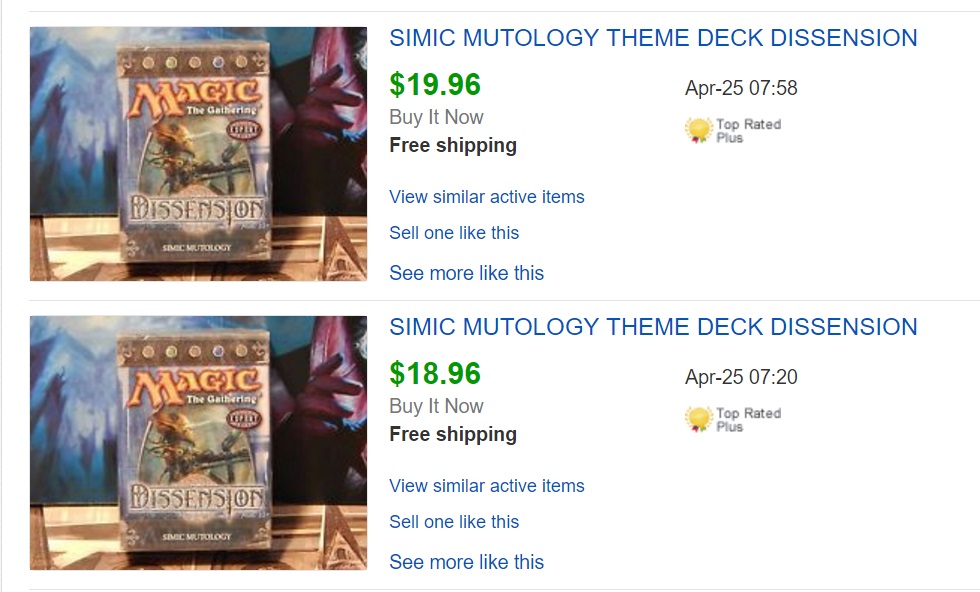 These are completed eBay listings from the day after the Hulk unbanning. While 98 percent of the deck is worthless commons (RIP Coiling Oracle, a card that used to be pickable), you also get a complimentary $3 Experiment Kraj with your Hulk. If you were aware of and bought the "Simic Mutology" theme deck, you could have bought $20 hulks for your EDH deck while getting a free $3 card and some bulk, versus paying $25 for just the hulk on TCGplayer. 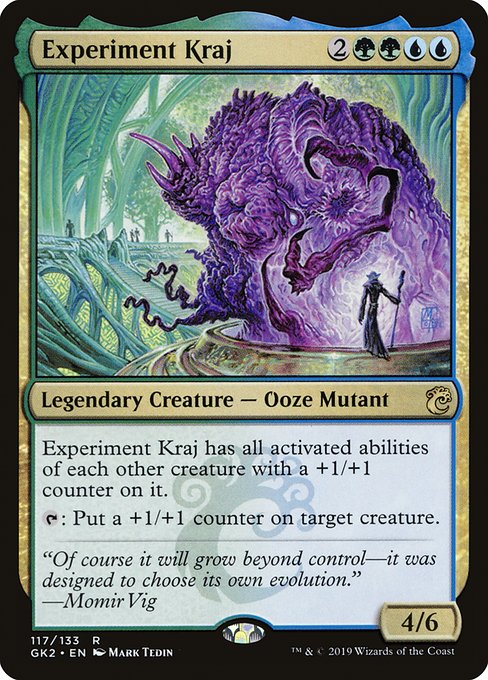 Now, obviously there isn't really room for profit here. Buying a $20 theme deck with the hope of selling your Hulk for $25 a week later when your cards come in the mail is both unrealistic and improbable. Even today as I'm writing this article, the market price of hulk is around $18. The important thing here is more the theory than the practice. This is just the most recent example of a phenomenon that has existed for several years, where the sealed product containing spiking singles will lag behind, providing opportunities to buy in and ease the cost of cards.

The most widely known example of this phenomenon is probably the Stoneforge Mystic event deck released in 2011. The War of Attrition deck infamously came with two copies of SFM, which was swifly banned after New Phyrexia wreaked havoc on the Standard format. In a public relations travesty almost on par with addendum-banning a 1/4 cat, WotC allowed you to continue using Stoneforge Mystic in Standard: but only if you used the exact 75 cards that came in the NPH event deck. Anecdotes aside, the event deck was left upon the shelves of LGSs everywhere, and there was always a nice chance to pick them up from delayed eBay sellers each time Stoneforge did its yearly jump.

These event decks were famous for containing powerful cards in a package ready for FNM, but several of them also offered a financial opportunity or two throughout their lifetimes. Let's take a look at one of my favorite decks from that time period. 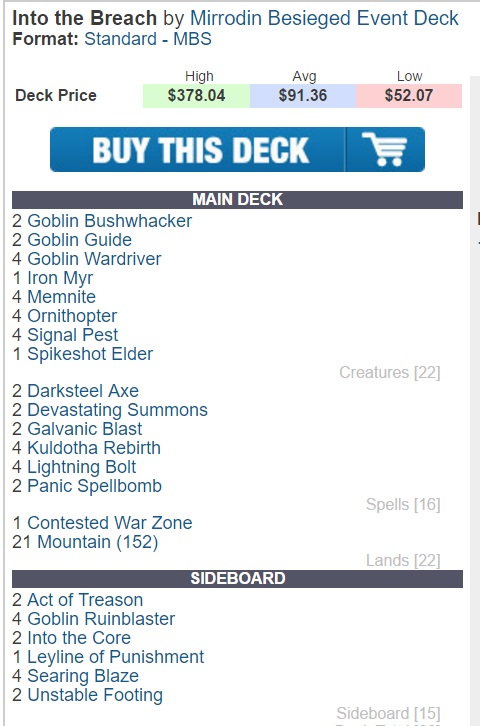 This deck started with so many four-ofs, and it only took four Mox Opals and another couple Goblin Guides to be competitive. I miss this Standard format so much.... Anyway, I'm curious to know if there were any of these decks on eBay for $65 prior to the MM17 of Goblin Guide. If someone was looking to complete Modern Burn a few months prior to the reprint without incinerating their money, they could have looked into picking up a couple of these decks instead, filling a cart with a playset of  Goblin Guides in addition to playsets of Lightning Bolt, Memnite, Signal Pest, and a couple Goblin Bushwhackers. That's like $25 in common/uncommon picks alone! The Searing Blazes and Leyline of Punishment are the cherry on top of the Memnite icing on top of the Goblin Guide cake at that point.

Thankfully, we don't always have to look back at products from seven years ago to find sealed products worth pouncing on. 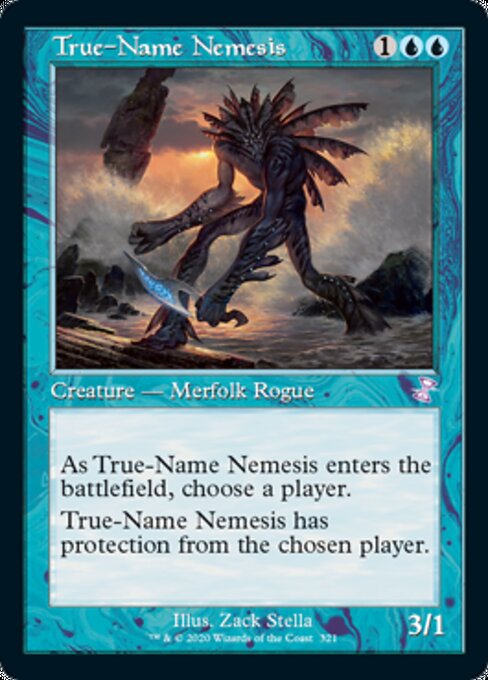 TNN was down in the dumps prior to Aether Revolt recently, and many locals had given up on their Mind Seize investments from a couple years prior. It was getting to the point where you could pick up this once impossible-to-find deck at close to MSRP. Then, everything changed when Sensei's Divining Top was banned. Suddenly, Terminus is significantly weaker and TNN can come out to play. While everyone else bought out True-Name, you could have been on the hunt for Mind Seize decks at closer to MSRP, while getting 99 other cards that buylist to make up for the difference in price and then some.

This is the part of the article where I would normally give you advice on a specific target based on the information presented. Unfortunately, the list of "single cards that could spike extremely hard but are also in sealed product from up to or over a decade ago" is kind of short. If you look at the current banned lists across Modern, Legacy and Commander, it's really difficult to pick a card and think, "Hmm, yeah I can totally see them unbanning that relatively soon, and it's also in this Event Deck over here...."

I know you'll be upset at me if I don't provide at least one, "Well, maybe this thing..." so here we go. Let me preface this statement with multiple instances of the same disclaimer:

Okay, so yeah. My pick is Jace, the Mind Sculptor. He's currently banned in Modern, and Aaron Forsythe has at least entertained the possibility of maybe possibly talking about setting him free eventually. There's a lot of maybes there. I know the community is split pretty decisively on this, but I think Jace is an abstract possibility for an unbanning down the road; maybe once they get another printing or two under his belt to keep the price under control if he does get unbanned. 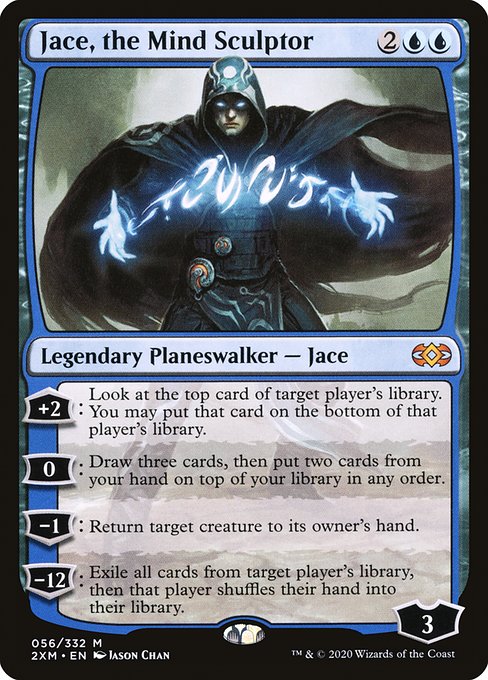 So. If (if) Jace gets unbanned, we all know that every single copy on the internet will immediately be purchased from TCGplayer, SCG, CFB, eBay, Cardshark, etc. However, we know that sealed product tends to lag behind. Simic Mutology lagged behind the Hulk spike, and FTV: Realms lagged behind the Grove of the Burnwillows spike. It's just not the first thing people search for when a card gets unbanned.

So what should you be searching for when the apocalypse hits? Instead of frantically typing Jace, the Mind Sculptor into TCGplayer and watching copies disappear in your cart, I recommend targeting From the Vault: Twenty.

There are a couple outliers on eBay at $100ish, and you can see by my "review offer" image, I'm fishing for a decent deal on this. Even without Jace being unbanned, the price of a sealed FTV: 20 is reasonably close to the full value of the quality cards on the inside. These are all EDH all-stars that sell reguarly at my shop, so I might have just ended up finding an arbitrage opportunity instead of a spec. Hmm.

I'm not really a fan of holding sealed product for the long term; I think a lot of us learned that lesson back during Return to Ravnica and Conspiracy boxes. The explosion in the playerbase was finally met with an increase in print run to match, and we haven't seen the long-term gains on those types of products that at one time we might have expected. However, I think there can be exceptions to the "stay away from sealed product" rule. This article demonstrates several examples where frenzied players are slower to react to recently spiking cards when they're hidden among the different names of sealed product. If you see a card spike hard or a card get unbanned, try searching "Simic Mutology" instead of "Protean Hulk" when you're racing to get your one-of for your Selvala, Heart of the Wilds Commander deck.