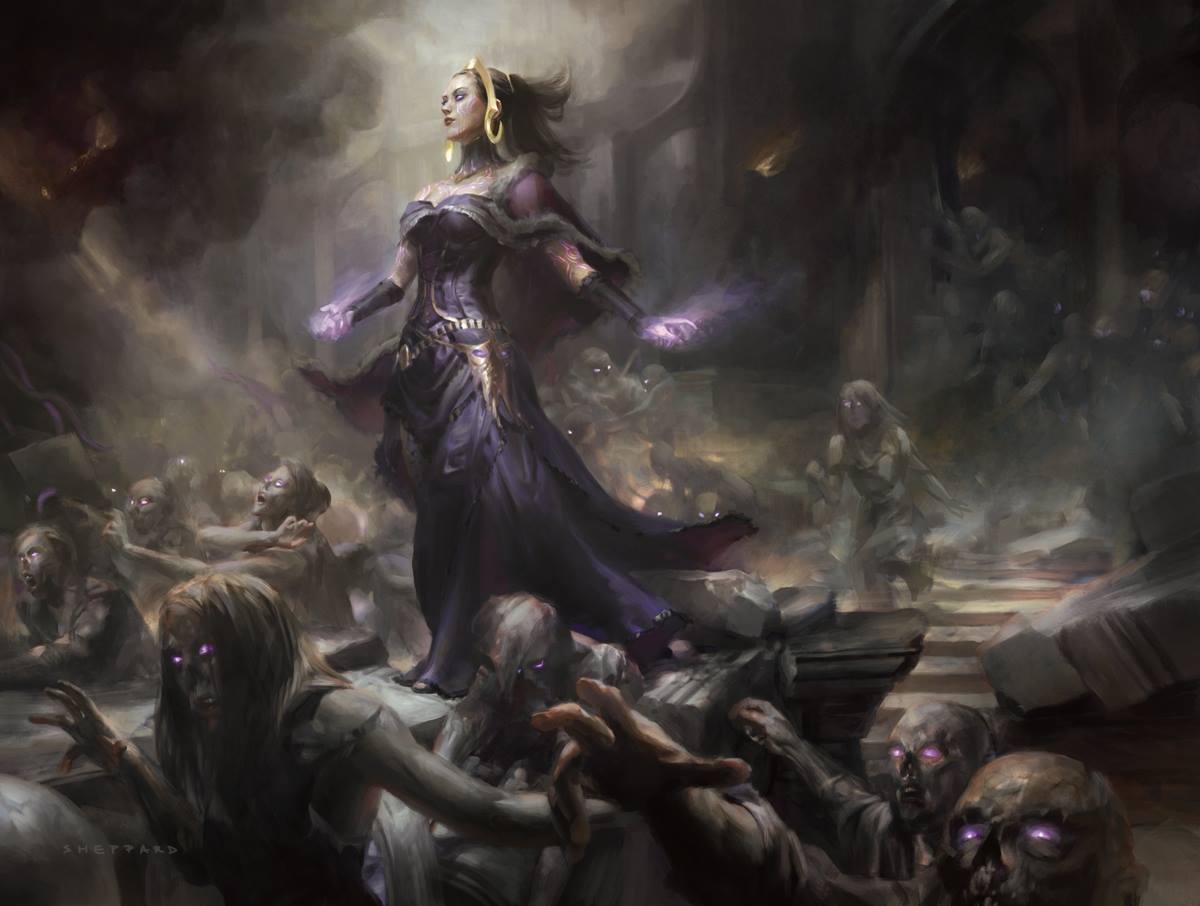 I'll be the first to admit that I'm very much a paper Magic player. I have an MTGO account, but I only got it to redeem sets (specifically Fate Reforged when sets were dirt-cheap).

That being said, us exclusively paper players can still recognize MTGO as a good source of information. The efficiency of transactions and the ability to play formats at any time can lead to very fast developments in a metagame (regardless of format), and those changes can often lead to shifts in the paper metagame. This means that watching the MTGO marketplace can show us metagame trends that can lead to good speculation targets.

Now a word of caution: the MTGO economy is still different enough from the paper economy that not all price shifts will transfer over. However, it is similar enough that we should notice the trends—it's up to us to choose which ones we want to explore further. Case in point, here is the price graph of Ulamog, the Ceaseless Hunger on MTGO:

What you'll notice is that the price began an upward trend on April 26th, 2017, and it peaked on May 7th. If we look at the paper price now:

The price remained stagnant until after May 7th, which shows that the MTGO metagame showed strong demand for this card even while the paper metagame was slow to react. If you had bought paper copies of Ulamog, the Ceaseless Hunger anytime in that almost two-week gap, you would have seen decent profits (assuming you could out them anywhere close to retail).

Now I will admit that assumption is actually a bigger one than many might think, as buylist prices for Ulamog, the Ceaseless Hunger are still below the retail price from before the spike. If your plan was to out to buylists you still would have lost money, despite this card seeing around a 66% retail price increase. 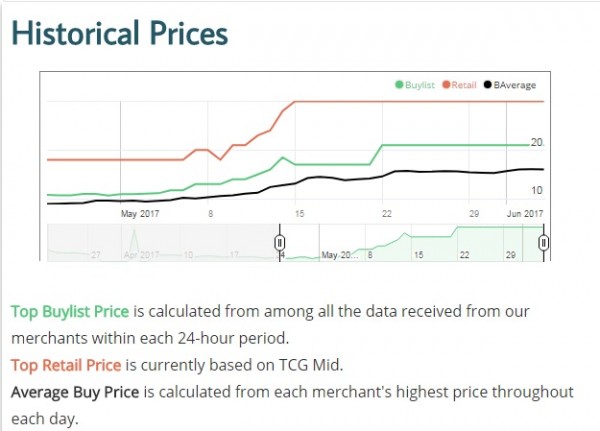 That being said, if your goal was instead to make it cheaper to play competitively, than you could still make your "profit" trading for the cards when they were cheaper (before the movement) and trading them away again after the movement. It's easy for many of us writers to forget that if your goal for MTG speculation isn't to make large amounts of money (which admittedly requires a great bit of work), but instead to simply expand your collection at a reduced cost, then these types of price movements still greatly benefit you.

But back to the topic at hand. How about Torrential Gearhulk?

Again we see a price shift for Torrential Gearhulk on April 25th online. And here is the paper shift:

We see a more gradual price rise in paper, but even still we see the card spiked 71% upward online between the 25th and 29th of April, yet our paper price moved only 7% during the same time period. Now the paper price eventually reached a full 100% higher in price, but that didn't occur until May 8th.

Note that Pro Tour Amonkhet occurred between May 12-14th, so there was definitely a lot of competitive players preparing for the Pro Tour (and likely trying to get ahead of the game and/or buying into the hype).

How about a non-mythic?

Here we see one of the big winners from the Zombie archetype. It was a bulk rare until late April on MTGO, and could be picked up for less than 0.1 tix until April 11th. Then it started to move and waffled a bit between 0.1 and 0.3 tix all the way until April 26th, when it broke 0.5 tix.

Then it began its ascent (with some additional waffling, mind you) all the way up to 1.3 tix, which meant that anyone who bought in early could have reaped massive MTGO profits in the neighborhood of 1300%. And yet, again, the paper price lagged:

In paper this card remained in or around the bulk rare range all the way until May 7th. This means that one had three-plus weeks to acquire copies dirt cheap in paper at almost no risk, after a positive trend on MTGO had begun. (In theory we have had a lot longer for anyone who thought that Zombie tribal might be a thing.)

Having read up to this point, you might be thinking this seems like easy money. Why not buy into every card that spikes on MTGO before it moves on paper?

Let's look at one of the key cards in the supposed "best deck in Standard" leading up to the Pro Tour, Heart of Kiran.

What we see is a strong but gradual price increase. It peaks right after Amonkhet's release and shows a 70-90% price increase (depending on what day you might have purchased copies) from previous lows. That's even higher than the Ulamog bump.

But here's how it fared on paper:

No price increase at all. In fact, a continual negative price trend beginning before the Pro Tour (when everyone thought it would rule over the meta) and continuing past its lackluster showing and beyond.

This should serve as a word of caution that not all positive trends on MTGO translate to paper. If they did, assuming the information wasn't too hard to exploit, the system itself would result in shorter and shorter price windows until they basically matched lock and step.

Now that we've established that there is often (but clearly not always) a delayed relationship between MTGO and paper price increases, let's see if we can find some of the recent movements on MTGO and evaluate their potential. 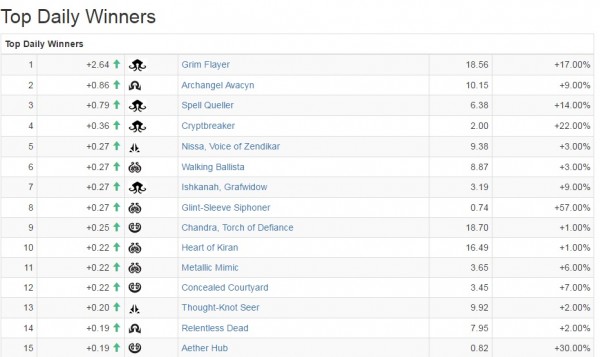 The first thing that jumps out is that there aren't any massive spikes like we saw on Ulamog, the Ceaseless Hunger or Torrential Gearhulk. The first card on this list is one that hasn't been seeing a ton of play in Standard at the moment, though it does see play in some Modern decks.

When we look at the MTGO graph for Grim Flayer, it doesn't appear all that promising. It has generally trended downward, with only a few upswings. If we then compare it to the paper graph:

What we see is a pretty continual negative trend. It is also important to recognize that in the fall we will see BFZ and SOI blocks rotate out, so the future potential for this guy has a pretty limited window. I like him long-term as a post-rotation pickup. But given that his price isn't currently inflated from Standard play, I don't expect the price to drop a ton (like it often does for Standard-only staples at rotation).

So what about Spell Queller?

And here is the paper price:

I actually do like Spell Queller. I know what you're thinking. I just said I wasn't interested in picking up an eternal-playable mythic from Eldritch Moon but now I am for a regular rare (with the same rotational window). The difference is that the price gap for Grim Flayer between MTGO and paper is only around 12%, whereas the price gap for Spell Queller is closer to 30%.

When it comes to looking at cards' potential for profit, I'm a big fan of comparing percentages. If you have $1000 to buy stocks and your options are a $20/share stock with a potential 12% upside versus a $5 stock with a 30% upside—for comparison's sake, say they both belong to the same company, but the cheaper one is common stock—I'm going to take the $5 stock with the higher upside every time.

Note this is a personal approach. It is often riskier, after all—Grim Flayer is a mythic and much rarer than Spell Queller which means greater potential in general. However, most of my speculation targets with great returns have been on the riskier side (though as I mentioned last week they don't always end up well).

Spell Queller has other things going for it. It can hit Aetherworks Marvel on curve (whether on the play or draw). There's been an uptick in Counters Company decks in Modern, and we have seen Spell Queller show up in some of the Bant variants.

The last one we will discuss is the one with the highest increase, Glint-Sleeve Siphoner:

This card has waffled a lot online, with highs and lows showing a lot of variance. Siphoner serves as a decent Dark Confidant impersonator in decks that generate extra energy (as you want to play this card when you already have two energy to trigger it the first upkeep after you play it).

We didn't see any cards that produce energy in Amonkhet, so there is a strong likelihood that the energy mechanic will remain a Kaladesh block exclusive. Wizards tends to keep block mechanics exclusive during their days in Standard, so if we do revisit the energy mechanic I expect it to be after Kaladesh has rotated.

However, because we have a significant amount of Standard with Kaladesh left, there is a good bit of time for this card to find a home in another competitive deck. We are starting to see a Golgari Constrictor deck pop up on MTGO now—should it show some staying power, this card could see a decent-size bump in price.

The current paper price has held a constant negative trend.

I am a firm believer in utilizing whatever resources you have available to you. Reviewing and keeping track of the MTGO metagame is a great way to pinpoint future speculation targets. The typical window of opportunity between online and paper price movements means that those who remain vigilant will likely make some solid profits.