It was the most fun Grand Prix I've ever been to, for a multitude of reasons. I got my first experience working behind a vendor booth (shoutout to Hareruya/95MTG for giving me the opportunity), getting married (shoutout to my wife Emily, who sorts Magic cards in exchange for coffee), and all of the old and new friends I met throughout the week (shoutouts all around!). I managed to sell a good chunk of cards, and then used the cash to sweep the floor for good deals in the booths of other vendors. I won't dedicate words to every vendor that was in the room (there were more than 30), but I want to highlight some of the better places to buy and sell so you can make a mental note for your own future Grand Prix experiences.

I started off my MTG finance adventures Tuesday night by selling a whole bunch of stuff to Thomas Dodd in the lobby of the hotel. Getting to know the people in this industry on a personal level gives you such a leg up on anyone else looking to sell cards at a huge event like this. While selling cards inside the convention center during the event between players is obviously a no-go, I was certainly happy to sit down with Thomas at around 10 p.m. on Tuesday while he went through my ogre boxes. I ended up selling off almost my entire Ogre box from last week's article to him, freeing up a lot of cash for the rest of the week to go deal hunting. Pretty much all of the cards I sold to  him were either picked out of bulk or gotten at 10 cents a piece, so it was as close to free money as you'll ever get. I sold dozens of Shield of the Oversouls at $1.00, over a hundred Swan Songs at fifty cents a piece, and an unsettling number of Shadowborn Apostles. The event hall wasn't even open yet, but I had sold pretty much everything I had came to get rid of, other than a few high-end cards. 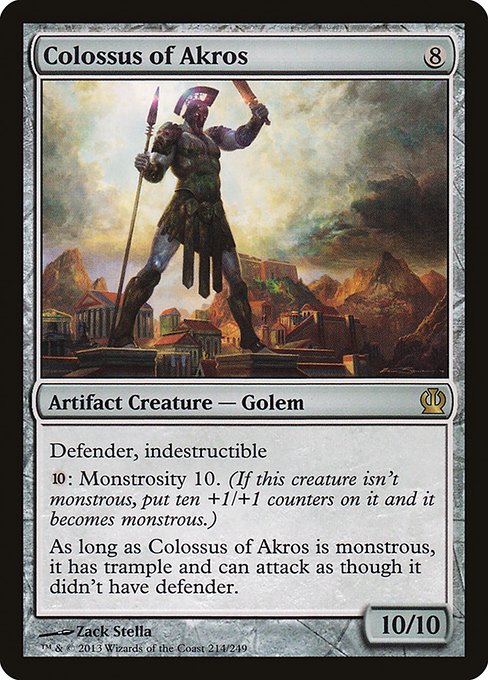 On Wednesday, I made my way over to the Hareruya booth for the first of many times in the week. Because the main event hall wasn't open yet, there were only five or six vendors packed into a room meant to seat around 800 people. There ended up being well over 1,000 heads in the room at any given time, and it was a nightmare to try and navigate. Jason Alt and I could barely move through the hall and didn't want to stay in there for long.

I sold the rest of my high-end stuff (except for my 9.5 Lotus) to Hareruya, because they were paying the best in the room on pretty much everything. There are probably a few people reading this questioning why I'm shouting out this specific vendor so much, and maybe wondering if my endorsement is linked to the fact that I worked for them on Thursday. My support doesn't come from the fact that I stood behind their booth; I worked for them because I knew that they were great prior to this weekend, and their aggressive buylist proves just that. Here's a picture of the hot list on Thursday morning at 11 a.m. 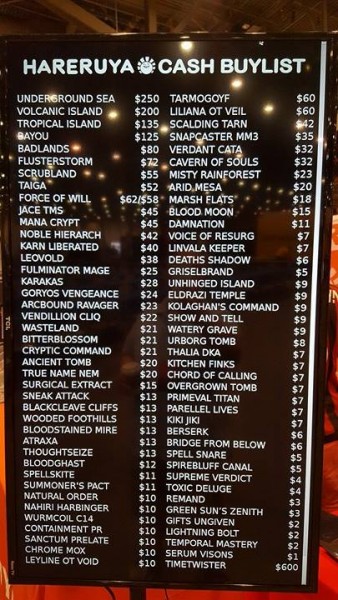 We were paying damn near retail on several of the hotter cards on site.

TCGplayer market price on Parallel Lives is around nine dollars. We were buying at seven, selling at eight. We were selling Tarmogoyf at $68 for the Modern Masters 2017 version, and paying $60 cash. That's more than you would get if you sold it on TCGplayer while matching the cheapest listing. We literally paid above retail on Leovold, Emissary of Trest. I really enjoyed watching the look of joy and surprise on players' faces as they got paid way more than they expected for their cards. While these buy prices don't follow through down to the Shield of the Oversoul-level cards that I dumped on Thomas, Hareruya is definitely the place to go if you're looking to buy or sell staples. They gave me amazing numbers on my Power, and I wish I had brought more of my inventory to unload some extra Lightning Bolts and Serum Visions as well. 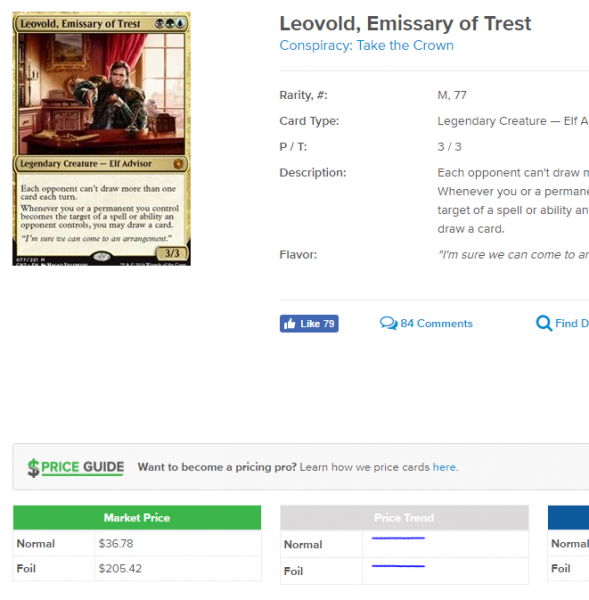 And Now for Some Buying

So I ended up with a good chunk of cash after Wednesday. I unloaded thousands of $1 to $2 cards, and then a small lot of Power. Thursday was a work day and Friday was my wedding, but that still left all of Saturday and Sunday to go deal hunting. Thankfully my wife also plays Magic, so she was content to go deal hunting with me for cards for her EDH deck, watch the cosplayers, and play Commander. 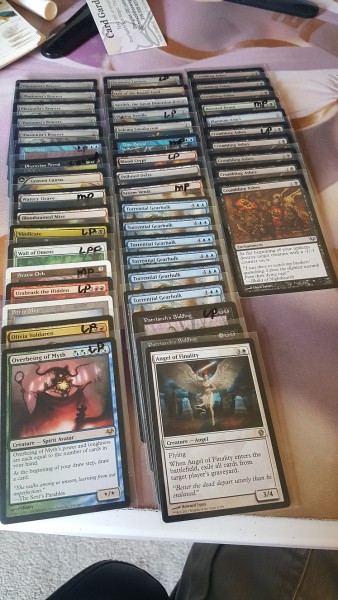 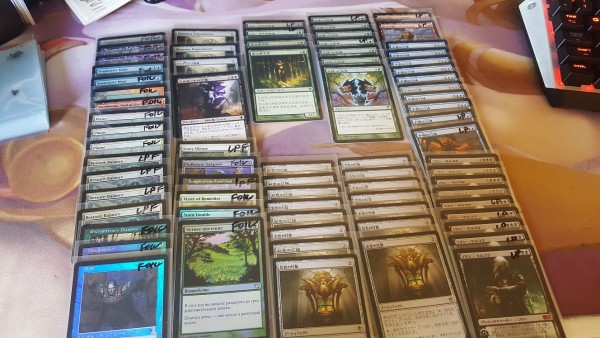 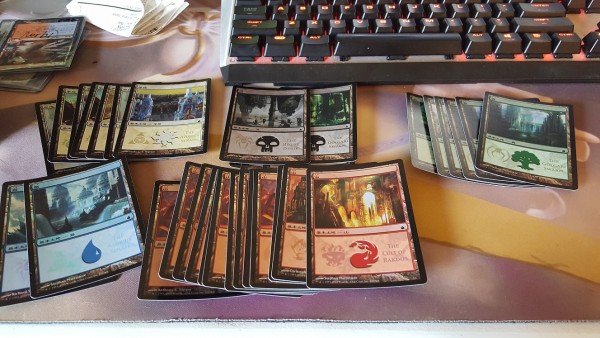 When the dust settled, here's most of what I ended up with. Some of the cards have already been soaked up into my own personal EDH decks (foil Gaea's Cradle, foil Hall of the Bandit Lord, foil Urabrask the Hidden, foil Phyrexian Arena, so for those, you're looking at the non-foil replacements that came out of the decks.

Let's start our buying discussion with Hareruya, because we've already been on the subject. They're a vendor based out of Japan (this is their English branch, but the two work closely together), and it's where I picked up a lot of the Japanese non-foil Commander cards. While I've said in the past (and still agree) that non-English casual cards can be frustrating and difficult to move, some of these deals are just too good to pass up, even if the payoff takes longer than normal.

I picked up the Chromatic Lanterns for four dollars a piece, and the Sorin Markovs for ten dollars each. Copies of Parallel Lives at four a piece seemed really easy as well, and Leyline of Anticipation at six? Sure. It's entirely possible it will take me multiple weeks or months to move these, but I'm confident in the margins I'll end up getting when I do. The key will be to aggressively price them at less than their English counterparts in the case, to make sure they move faster. While Japanese Tarmogoyfs and Liliana of the Veils might command a slightly higher sell price on a marketplace like TCGplayer, I'll put the Lanterns at $7.00 or $8.00 right next to the English ones for $9.00 to try and sell them quicker.

It's worth noting that I didn't pay sticker price on most of the cards in these pictures. The only vendor with a firm "no offers" policy is Hareruya, because their prices are already low and the margins are so thin. Pretty much every vendor has at least a part of their display that they're trying to move at a discounted rate, and that they're willing to cut you a deal on it if you play it smart.

Most of the time, it's about figuring which vendors specialize in what. Some booths move foils easily in their home state, but they struggle to sell foreign cards. Others primarily deal in non-foil English staples like Walking Ballista, Collective Brutality and Tarmogoyf, but they want their foils gone. Some vendors specialize in alters, misprints and miscuts, where the market price designations are a lot murkier.

You might be surprised to learn that I didn't pick up any of the Japanese foils in the above pictures at Hareruya. The Treachery foils and most of the MPS basics came from a vendor called Grey Ogre. Based out of Singapore, they carry a reasonably large selection of Japanese and English foils that they were looking to move pretty aggressively. Do a quick scan of the case and see if you can find any foils that jump out at you as incorrectly priced. 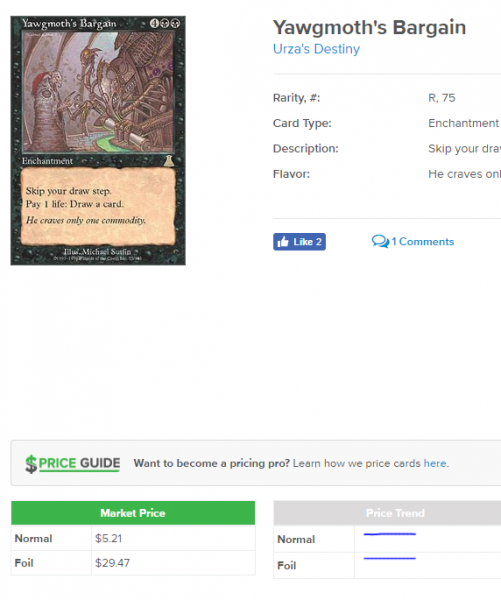 Do you see those two foil Yawgmoth's Bargain in the top left corner of the second picture? I picked up the first one at $28.00 USD, and the second at $40. The "Market Price" on TCGplayer is set to $29 because that's what copies have been selling for recently. However, the cheapest listed one on the actual sellers' page is $99, and it's been that way for a while. I did a quick check for eBay completed listings and saw that copies have sold for $65 to $70 in the past few weeks. Done and done. I didn't even make an offer on either, because I didn't want the vendor to look up the card and reprice.

Finally, don't be afraid to just keep coming back once or twice a day with the same offer on an obscure set of foils. I made an offer of $85 for the playset of foil Restore Balances, when the current TCGplayer low for a single copy is around $40. (The "Market Price" is $28, and that's what the cards were stickered at.) The vendors at Card Logic turned me down initially, but I had a feeling that I was one of the only people in the room looking to pick this playset up. I stopped by on Friday, Saturday, and finally Sunday, and they eventually caved because they didn't want to bring the cards home.

Speaking of Card Logic, they were one of my favorite vendors to pick up stuff from last week. When I initially walked up to the booth, I was greeted by a gentleman who explained their pricing system. "Everything in the case is priced at TCGplayer market value, or around there. However, let me know what you want to pay, and we'll work something out." Alright, so that's a business model I can bring my wallet out for. Everything is already listed at "or best offer"? I'm interested.

I proceeded to make offers on anything in the case that looked even slightly priced wrong, or poised to jump soon. A $3 foil Black Sun's Zenith? Mine. A $2 promo Wall of Omens? Sure. A single copy of Devoted Druid in the case for $8? I talked them down to $5 because the back was kind of scratched up. The team at Card Logic were here to sell cards, and their plan was certainly working on me. An $18 foil Purphoros, God of the Forge and a $20 foil Patriarch's Bidding? Sure.

To recap, here's a list of vendors I really enjoyed spending time with at the Grand Prix, and why:

And incidentally, getting married has been pretty good EV so far. How did your #GPVegas go?