Below are the total set prices for all redeemable sets on MTGO. All prices are current as of October 16, 2017. The TCGplayer low and TCGplayer mid prices are the sum of each set's individual card prices on TCGplayer, either the low price or the mid price respectively.

It's another week of price gains for almost all the sets that I am tracking on MTGO. Even Ixalan (XLN) has joined the party this week, bumping up to 65 tix. This is the stage where interest in Standard is very high and XLN will maintain its price despite being drafted heavily. Although there will still be a slight downward bias on MTGO, the price of XLN in paper will come down at a much faster rate, fed by redeemers exchanging digital sets for paper versions.

If you've been thinking about getting into Standard but haven't picked up the cards from XLN that you need, it's a good time to be a buyer of playsets. The play value you get over the coming months will balance out the inevitable price downside.

For speculators it's a different story. XLN will become a good target just prior to the release of Rivals of Ixalan (RIX) in early 2018. That will be the most economic time to be a buyer, when drafting has pushed the most amount of supply into the market and redemption has slowed down. In January, I will be a buyer of full sets of XLN in order to take advantage of the inevitable price low.

Bottom fishing on singles is another viable speculative strategy, as long as you have a long-term perspective. Look for rares and mythic rares priced at junk or near junk. That means 0.05 tix or less for a rare, and 0.15 tix or less for a mythic rare. At this price, the downside is limited. The strategy here will be to select cards that have potential, but for whatever reason are not seeing play in Standard. As long as you can develop a sense for a card with potential, the strategy is fun and often worthwhile.

Rowdy Crew is a great example of a potential bottom fishing spec. Noted red mage Tom Ross was very high on this card when it was first spoiled, but the price has dipped as low as 0.2 tix. It's currently seen a resurgence to 0.4 tix due to redemption, but I anticipate this card will return to junk pricing eventually. With Hazoret the Fervent and Chandra, Torch of Defiance locking down the four spot in red decks, there's just no way Rowdy Crew is going to see play in Standard for the next year. Look for this card to get a second look in October 2018 when Kaladesh (KLD) and Amonkhet (AKH) rotate out of Standard. Until then, this card has next to zero play value in Standard.

Elsewhere, Esper Gift is a novel archetype that took down the Star City Games Standard Classic in Charlotte over the weekend. The deck seems to run a bunch of draft leftovers backed up by Champion of Wits, Angel of Invention and God-Pharaoh's Gift. The seven casting-cost artifact has been trying to find a successful shell in XLN Standard, and this might be it. The price of Angel of Invention is rising as a result and this looks like the deck to push it back to 10 tix.

For the third year in a row, triple Innistrad (ISD) flashback drafts will be run for Halloween at the end of October. It's rare to get such a clean comparison to work with, so it's worthwhile diving deep into how a week of flashback drafts affected the price of cards from ISD. In particular, the price of a Modern staple like Liliana of the Veil should be of special importance, since it is often the most expensive card in the format and is highly sought after by the entire player base.

Below is a price chart reproduced from GoatBots's website. I've marked the price peaks in the weeks ahead of Halloween as points A, C and E. Points B and D represent the price bottom on or around the end of October, while point F represents the current price here in the middle of October. 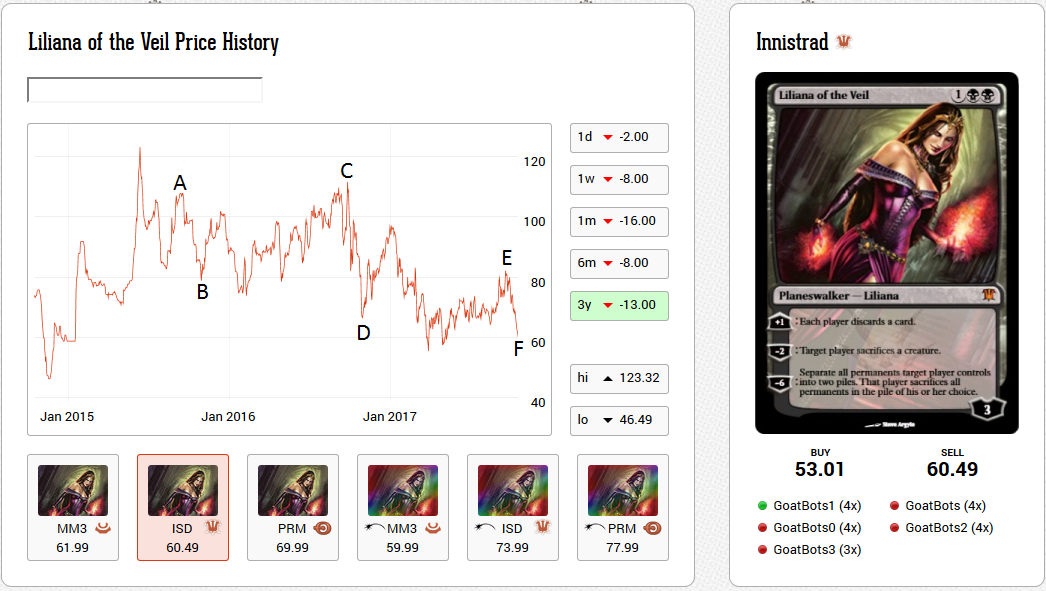 Each point and its price is reproduced in the below table, alongside some calculations of the price drop between the relevant points. The calculations are under Peak to Trough. The drop from point A to B and from point C to D are two clear examples of what a week of triple ISD flashback drafts means for the price of Liliana of the Veil.

With these two examples in mind, I can make the conjecture of what is going to happen this time around. Currently we are 21 tix into the decline from point E, which matches the A to B decline on a percentage basis. With a couple of weeks to go before drafting starts, I think it's safe to say we have not yet reached the price bottom. There's going to be some more selling which will bring the price down further.

Using the absolute tix drop observed the last two years, this gives an upper and lower bound to the anticipated price decline. Applying the A to B decline in tix to Point E gives the high price target, called Target, Max. Applying the C to D decline in tix to Point E gives the low price target, called Target, Min. With these two price targets in mind, I now have an idea for when it is correct to start buying and at what price.

I am doubtful the price will get to 41 tix, but a price in the 50 to 55 tix range seems very plausible. I will be on the look out for a price bottom on this Modern staple in the coming weeks. The reprint of Liliana of the Veil in Modern Masters 2017 (MM3) earlier this year and the drip of supply from Treasure Chests means the potential gain on this card is not what it once would have been, but I expect a return into the 70 to 80 tix range by February.

For a complete look at my recent trades, please check out the portfolio. I have been working on building a Modern basket of staples. Although there hasn't been any drastic decline in the price of Modern cards, there has been price weakness over the last month with interest in Standard running high, triggered by the release of XLN and fall rotation. Buying into Modern now is a great way to ride the inevitable uptrend as we head into the winter and the Modern Pro Tour for RIX.

Capturing this trend means looking out for good deals, and picking up playsets here and there. I've bought into Mox Opal, Scalding Tarn, Karn Liberated to name a few. Don't overlook Modern sideboard options like Leyline of the Void and Leyline of Sanctity, two others I have been a buyer of. Even though they show up in the sideboard, they are often very important cards in a dynamic metagame, with large price fluctuations up and down. It's these fluctuations that make them perfect for speculators.

Don't mess around with fringe cards and fringe strategies. In the age of Treasure Chests, you have really have to hit fringe targets perfectly in order for it to work out. Stick to the staples and look for modest but predictable returns over the winter.