This week, I'm going to write about something on studying trends and metagame shift to make your speculations more accurate. As you all know, the prices of singles on MTGO fluctuate very rapidly. It's hard to buy into hype cards that spike after certain announcements or events unless you are literally in front of your PC when those things happen. Another thing is that if you follow picks from weekly articles like this one, you might miss out some opportunities during the week – a weekly article isn't frequent enough for the rapid fluctuations we see on MTGO! So, we are going to study some criteria to predict cards that are likely going to be increasing in price. 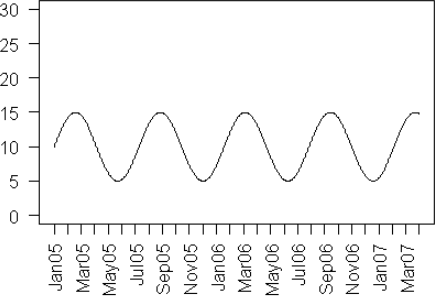 Cyclical movements in trends means the price of specific singles are moving very consistently up and down. Usually, if you can identify these cards at a low point, it will be easy money for you. Last season, some of the creature lands like Shambling Vents and Hissing Quagmire were very good picks under this category. Some graphs might not be as consistent as the diagram above, but they are actually cyclical if you take a look at at least six months of data. As of now, below are some examples:

Spirebluff Canal is the  land in Standard that blue-red decks want. Occasionally, decks like Standard Blue-Red Control and Modern Blue-Red Gifts Storm or any other decks that plays this fast land will become popular and its price will go up with the demand. This land might not be as profitable as the two creature lands last season mentioned above, but it has some room for us to gain profit.

Bristling Hydra, meanwhile, is one of the best cards in energy-themed decks. For the past four months, the price of this card has reached multiple points above 4 tickets, which makes it pretty convincing that it has a very good potential to go up in price again in the future.

The metagame is changing from week to week. This week, the best Standard deck might be Sultai Energy, but it might not look so great after the tournaments next week. A general guide on how to predict metagame changes is by deck types, as in control/aggro/midrange. The Standard and Modern metagames are like a rock-paper-scissors scenario, where control decks have advantage against midrange, midrange are stronger against aggro, and aggro will easily beat control before it stabilizes. This is pretty straightforward. So if Sultai Energy is the best deck during the current week and it's a midrange deck, you might want to speculate on some control-deck components such as lands, control finishers, and frequently used spells for the upcoming weeks.

Torrential Gearhulk and Supreme Will have already increased in price last week after the release. I didn't get to pick up these cards before then, but its good to learn from these trends for better speculations in the future.

Two weeks ago, I talked about a few sweepers in the Standard format like Fumigate, Bontu's Last Reckoning and Hour of Revelation. Fumigate did go up in price to near 8 tickets after Ixalan's release, which is way above my prediction, while Last Reckoning also went up to my predicted price. I hope you guys made a good profit from these ones! The following screenshot is the initial targets that I set two weeks ago, and then the price trends as of this week:

Ever since Smuggler's Copter was banned in Standard, WotC has been quite aggressive in banning cards that make formats unhealthy. Sometimes, bannings are predictable, like Splinter Twin and Aetherworks Marvel. When a deck is so good that everyone is playing it (meaning the format is unhealthy), then you need to be alert that part of the deck might be banned in the next B&R announcement.

The considerations to make here are: 1) get rid of cards that are related to the targeted card, 2) think of a deck that will be good post B&R. Let's take the Marvel ban as an example: the card that is related to Marvel was Ulamog, the Ceaseless Hunger, so it was important to get rid of Ulamog as well when you were selling your Marvels.

In addition, you might have been able to predict that green-black decks (Verdurous Gearhulk) and Mardu Vehicles (Gideon, Ally of Zendikar) would become the next decks to beat after bannings. In this case, you would have wanted to pick up cards from those decks when they were still cheap. Lets take a look at the graphs of the mentioned cards:

From the graph, I've highlighted the part when the banning happened. As you can see, the price drops rapidly downhill. Thus, you know why its important to predict these changes before its too late.

At the same time, certain cards that were not in the Marvel deck increased in price at the same time that Marvel pieces were decreasing, as shown above. I personally did not pick up these cards, but by studying trends like this, perhaps we can all be more on top of these types of shifts the next an opportunity comes up.

When cards are confirmed to be seeing reprints in a new Masters set, they will usually drop in price, and then slowly increase again once the draft events are over. In the meantime, when the spoiler is completed, cards that are in the same format but not getting reprinted will increase in price – players and speculators alike know these cards are unlikely to get reprinted until the next Masters set.

Let's look at some of the cards that are reprinted in Modern Masters 2017. Liliana of the Veil and the Zendikar fetchlands like Scalding Tarn dropped a lot in price when they were revealed in spoilers (as shown in the graphs above, the obvious drop before MM3 release). However, the drop was only temporary, and after a few weeks, their prices slowly went back up. This kind of trend will make us a lot of tickets if captured correctly.

Fulminator Mage and Horizon Canopy are cards that were not reprinted in MM3. As shown in the graphs above, there's an obvious rise in the price. Do take note that the correct time to buy these cards is when you are very sure that they will not get a reprint. The number-one rule with this type of pick is always sell into the hype (20- to 25-percent profit), because you won't know when the price reach its peak and it's risky to keep them for too long a time.

Alright guys, that's all for this week. I want to thank you all for reading, and I'll see you all again next week!