Aloha, everyone and welcome to our Friday edition of the Daily Stock Watch! This will be my last pick for the week, so I'll try to leave you with something to think about. I also noticed that this would be my first non-rare pick (Aether Vial started as an uncommon but is now classified as a rare) since I continued working on this segment.

Let's take a look at this very popular land from Kaladesh:

Standard's ultimate mana fixer is the most played card in the format. According to my Utility Checker, sixty two percent of decks that made the top 8 of this year's relevant Standard tournaments use an average of 3.6 copies of Aether Hub; a usage rate that trumps the second most relevant card (Harnessed Lightning, thirty nine percent of winning decks used 3.8 copies on average) by quite a distance. For more reference, check out these decklists:

All these decks run four copies of Aether Hub for a very obvious reason, which is to stabilize an otherwise clunky mana base without it. The first two decks also have means of refilling their energy to make Aether Hub work like a pseudo Mox Opal, while Mardu Vehicles uses it like it's a Tendo Ice Bridge minus the energy refill.

For all that heavy usage, it's still sitting pretty at $2, which is just half of what it was worth during it's peak ($4.24). Common knowledge would dictate that this should be a $5 card by now, but it hasn't happened and it won't happen. I'm pretty sure there are people who've kept a pile of these cards (or its FNM version) and is still hoping that it will still go up for like, say, another dollar.

If you're one of these people, I think it's about time for you to cash out now. 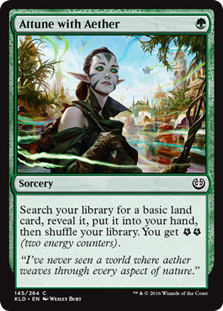 Calls to ban this card, along with Aether Hub, grew louder in the aftermath of Pro Tour Ixalan. Almost half of the playing field brought decks that had both Attune with Aether and Aether Hub on it. To add insult to injury, the deck that won the whole event had four copies of each. Touché. I'm not one of the people who wants to see it get banned, but honestly, Standard would be a different world without these two. Maybe two to three more decent energy cards and it could have made its way to Modern. Too bad this never happened.

In the next two months, you'll see more energy decks in action. Let go of your spare copies soon, especially if you could get some profit out of it already. If you think that I scared you enough, you could always sell them to online shops like Card Kingdom, who I think is offering a good buying price for it ($1.15 for normal copies, $1.30 for FNM ones). But if you think that there's still room for growth for this card, you should be able to buy them for $2 or less. Otherwise, keep your own playset for playing purposes.

That should do it for this week! Check back in again on Monday for a new edition of the Daily Stock Watch. As always, feel free to share your opinion in the comments section below. And if you want to keep up with all the market movement, be sure to check in with the QS Discord Channel for real time market information, and stay ahead of the hottest specs!