Every time a few weeks pass, there are different possibilities in the Standard format, without fail. Whether it is as an SCG Open, a Pro Tour, or just a slightly larger weekend tournament such as a PPTQ, players all over the country are consistently clamoring for the “next big idea” in the format. Fortunately for everyone else, and thanks to the internet, we have all of these different options at our fingertips.

Let’s start with the basics. Players who have just started out playing competitively, who generally only play at their LGS, or who happen to play competitively in Standard because they like the constant rotation, will all be looking for ways to circumvent the costs of the format.

Almost always, there are going to be mono-colored go-to options for budget players. If a player is looking to get into a format quickly, only needing basic lands or cheap uncommon lands with niche abilities makes it far easier to create a deck. Land bases, after all, have generally been the most expensive piece of a deck in most formats.

This one is quite simple. A stack of Plains and some Shefet Dunes, and the manabase is ready to go. The deck is mostly a four-of deck, using cards like Sacred Cat and Servo Exhibition. Even Queen's Commission, while costing three mana, can create quite a swing in board state when followed up with a Master Trinketeer, and all of these cards are collectively a dollar (or less) per playset.

The more expensive cards in this archetype would be Legion's Landing and Anointed Procession, clocking in around $7 per copy for each. Angel of Invention is also a bit on the expensive side at $5 per copy.

This deck has no cards that cost more than $8 per card, fortunately. Shaving off a few copies of Field of Ruin from the manabase, and keeping the sideboard cheaper with cards such as Baffling End, Ixalan's Binding, and Thopter Arrest, can keep the total price of this deck well under $100 in total card value.

While Legion's Landing is quite powerful, playing cheaper effects such as Cartouche of Solidarity to create tokens while also generating value on cheap creatures can work wonders for the budget. Cartouche of Solidarity also has the added benefit of seeing fringe play in the Modern Bogles deck, so it has uses beyond this list for an investment of less than a dollar for a playset.

For the sideboard, Glory-Bound Initiate is also an excellent investment for life gain and anti-aggressive technology at the moment, which is under a quarter per copy and is a rare. 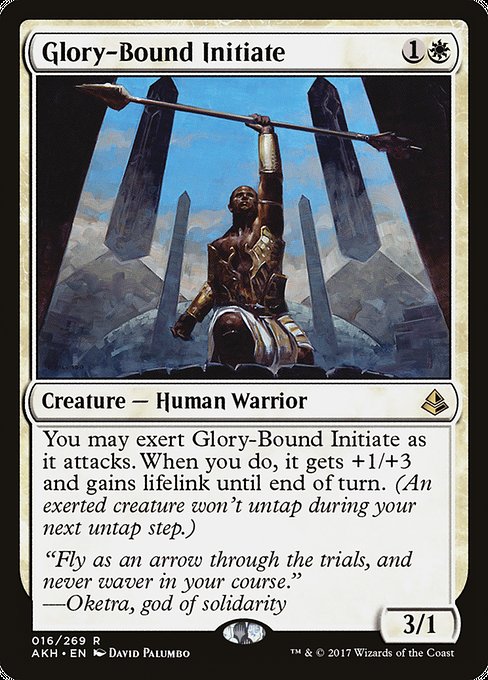 With Dominaria on the horizon, it's not out of the question that this card will also see some play in the future for other white aggressive decks. Also, it is a replacement for Regal Caracal that is also a far cheaper mana cost, if necessary. Since it is such a small investment, there is a possibility of some return with Glory-Bound Initiate.

This particular archetype has existed a number of times in the last few years, despite being slightly overshadowed by its Mono-Black Midrange counterpart. Mono-Black Midrange may seem like a budget deck at first, until you realize that Liliana, Death's Majesty and Fatal Push are both $8 and Vraska's Contempt is up to $16!

On the other hand, the more aggressive versions of Mono-Black hold plenty of merit and have some strong tools. Fatal Push is a card to invest in for multiple formats, and likely won't lose value even after it rotates out of Standard. Gifted Aetherborn and Glint-Sleeve Siphoner give the deck a strong backbone, and smaller cards like Night Market Lookout, Dread Wanderer, and Vicious Conquistador make the curve consistent.

In fact, now with the addition of Grasping Scoundrel, the curve is virtually perfect. Walk the Plank provides a strong removal option besides Fatal Push, and Aethersphere Harvester gives a way to punch through at the end of the game.

Every single card other than Fatal Push is below $3 per copy, and most cards are $0.50 or less. The entire deck is the ultimate budget example for players who cannot afford Hazoret the Fervent for their Mono-Red Aggro decks. 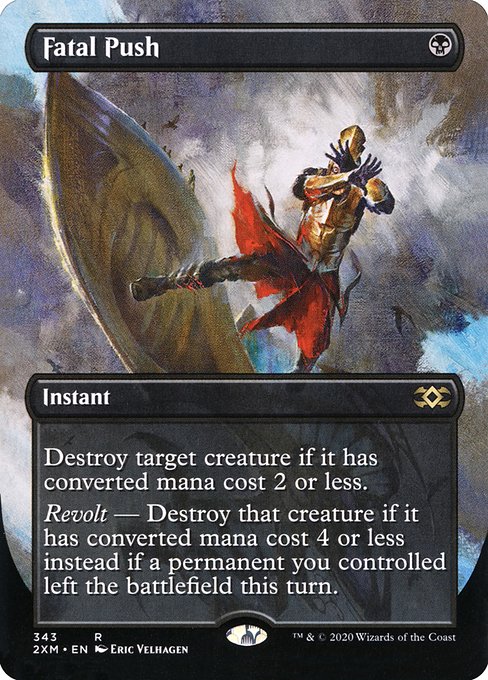 Players might still have difficulty acquiring Fatal Push, but fortunately Standard offers other removal as well, such as Walk the Plank and the criminally-underplayed Trial of Ambition to help deal with a vast assortment of creatures. Also, if players are having a hard time finding one or two copies of the staple cards in the deck, a copy of Bontu the Glorified can be an absolute haymaker that catches opponents unaware, and is under $2.

Lastly, Mono-Black has the option of using Plague Belcher as a curve topper.  The drawback does not feel quite so bad when played on a Dread Wanderer, and a five-power menace creature for three mana helps serve as the final possible haymaker. This is an optional replacement for Aethersphere Harvester that can save $5-$10 if needed.

What happens when you have a budget player who wants to play a control deck, but is very limited on finances? Well, honestly, often there is no such thing as a viable budget control deck. Fortunately, the current Standard format delivers an option.

People have been toying with Approach of the Second Sun since it was printed. At first it seemed like a fun gimmick card, but players have proven that games can be won convincingly using Approach as a primary win condition.

The cards that a player has to invest in for this deck to work are Fumigate and Settle the Wreckage, as playing control (especially in a mono-colored deck) requires multiple ways to wrath the board. Beyond those, if a copy or two of The Immortal Sun is possible, it would be helpful, but not completely necessary. 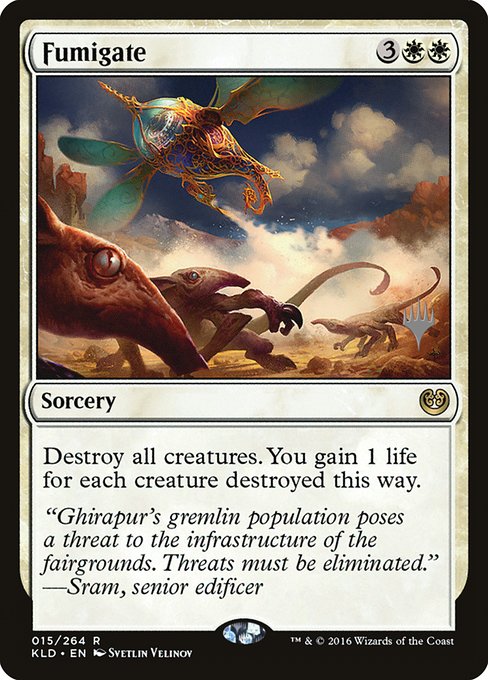 White has several ways in Standard to get rid of almost any permanent. The aforementioned Baffling End, Ixalan's Binding, and Thopter Arrest, along with Cast Out, make for formidable removal. Orazca Relic and Authority of the Consuls help mitigate life loss from aggressive decks, and Arch of Orazca allows for reasonable late-game card draw.

The entire deck, as a whole, can easily be done for under $100. If the player keeps the sideboard on the super-budget side of things, and just sticks with Adanto Vanguard and Regal Caracal along with budget common token makers, the entire deck can cruise in at under $80 as a price total.

One more very cheap sideboard option is Tocatli Honor Guard, which serves at this format's Torpor Orb. While the effect isn't insanely strong at the current moment, it has fringe uses and may see some play once Dominaria hits. Additionally, the card is less than a quarter per copy, and having one or two has the potential to be helpful over time. 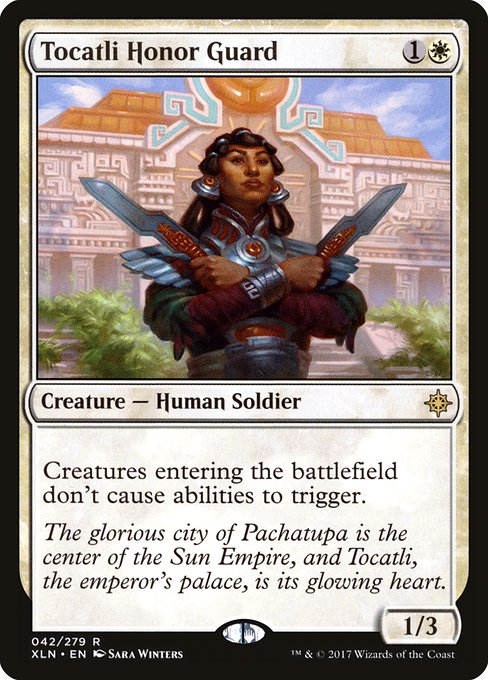 Unlike Standard, Modern has far more card options, dating back an extra few dozen sets. The drawback is that Modern on a budget can be very tricky to pull off.

I personally have this deck built, and it cost me about $30 at the time it was put together. The main reason? There are 41 basic lands.

This deck packs a bit more punch than the Zombie Infestation and Treasure Hunt combo, because there are more than eight total nonland cards in the deck. But we are sticking with the Treasure Hunt strategy to throw cards at the opponent and kill them with the excess of lands in the library.

This list is a bit easier to go over, since there are very few different cards. Seismic Assault and Swans of Bryn Argoll are the combo, with the former allowing a chain of damage-into-draws until enough lands are in hand to instantly slay the opponent. Playsets of both cost about $20-$25 on the cheap end, and are technically the only required cards. 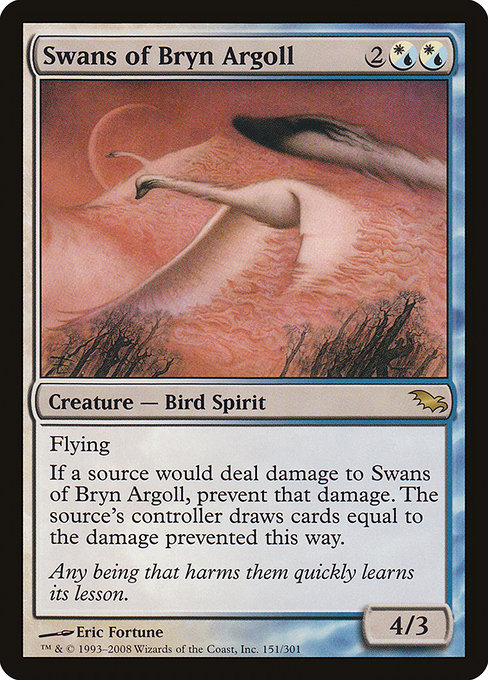 Molten Vortex serves as a budget Seismic Assault and as another way to get the combo online. A copy of Laboratory Maniac is an alternate win condition, if desired (or possible). A copy or two of Pyroclasm or Anger of the Gods helps fend off aggressors.

As for the land base, any untapped land that can provide both blue and red mana is good, so Spirebluff Canal and Shivan Reef are helpful. But playing with only basic lands, mainly Mountains at a 3:1 ratio, does not negatively affect the deck all that much. Fetchlands are also completely unnecessary, helping lower the price. The only tapped land that should be used is Swiftwater Cliffs for the life gain, which is less than a dollar for a playset.

The sideboard can be anything that the player finds fun. I personally play a set of Boomerang to delay my opponent’s lands for a turn and to answer dangerous threats. Vapor Snag is another great budget option.

Hopefully, the entire deck can still be put together for under $50, which is hundreds of dollars cheaper than the majority of decks in the format!

Okay, so a few points here. Yes, Burn is a consistent deck that has long been considered the “mono-red aggro” deck in Modern. Yes, not every deck is going to be dirt cheap like Seismic Swans. However, considering the average Modern deck right now is in the $500-$1,000 price range, this is a pretty good buffer.

MTGO player INGjoker was able to Top 16 a Modern Challenge with a deck that was essentially Ramunap Red before the Ramunap Ruins ban in Standard. Of course, powerful cards such as Lightning Bolt and Goblin Guide were added, and Goblin Guide is going to be a good investment to make since it fits into several aggressive strategies, such as Burn and Zoo. 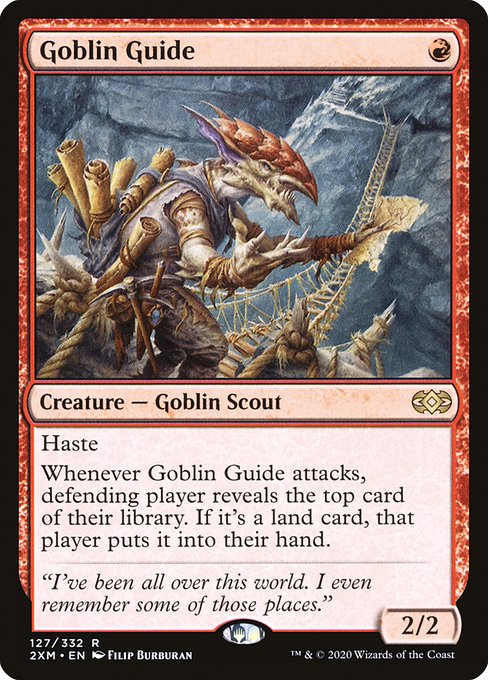 Add Bomat Courier, Rampaging Ferocidon, Goblin Rabblemaster, Searing Blood, and Incinerate for the ability to get past regeneration, and the resulting deck is linear and powerful. Rift Bolt is also a Burn card that should still be played, and Dire Fleet Daredevil gives the deck a whole new angle of attack.

While acquiring Goblin Guide can be expensive, there have been several options for Red aggression over time that can serve as reasonable cheap replacements. Monastery Swiftspear, Mogg Fanatic, and even Zurgo Bellstriker all fit the bill and can help reduce the price of this budget option even further. 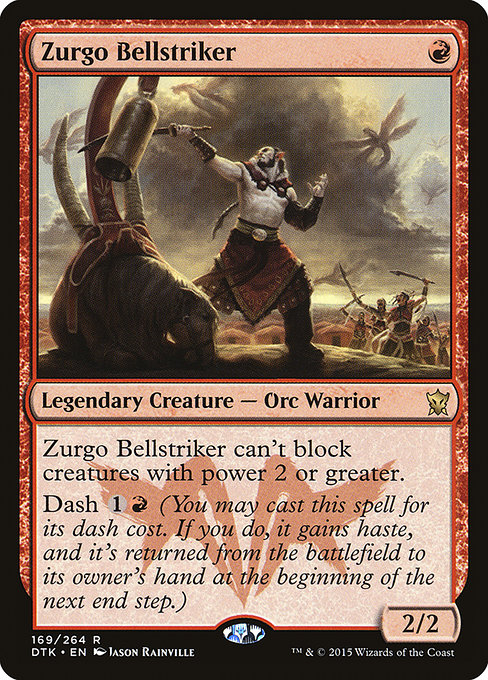 I will be honest, I was highly tempted to include Kuldotha Red over this deck, which is a deck centered around playing a turn-one Kuldotha Rebirth, but Mox Opal is up to $90 and far beyond any rational player’s budget, especially with perpetual whispers of the card being banned in the future. It is not currently overpowering the format, but with Chrome Mox going the wayside many moons ago, players can’t help but discuss the options.

Playing on a Budget

Magic has luck elements to the game, and no matter how good the cards getting sleeved up, no deck has a 100% win rate. Honestly, no deck should have higher than a 60-70% win rate; otherwise it will likely dominate a format.

Each competitor that is missing "perfect" or "optimal" cards needs to remember that any game can be won at any time. Admittedly, not every one of the decks in this article is a world-beater, but they each have the capability to be utilized for players entering respective formats. I like to think of each of these decks as a stepping stone to something greater.

Are there any budget decks that you would like to hear about? Let me know in the comments!