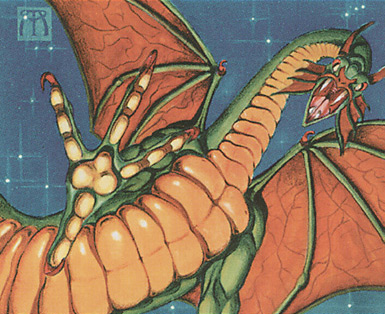 Six hundred million. That’s a six with eight zeroes after it. A large number when describing most things in life. But this week I reference this number because it quantifies the print run of Revised. It was really the first Magic base set that had a substantial print run—the previous set, Unlimited, had a print run of just 40 million. That means Wizards of the Coast stepped up the print run by fifteen times!

Why is Revised’s print run in the forefront of my mind? Because the top mover on MTG Stocks last week is from Revised and isn’t on the Reserved List!

Is Revised Shivan Dragon really a $16 card? Doubtful. But I do see copies selling for $5-$6 on eBay. That’s a huge jump from its previous price tag of about a buck. And I’d wager true Near Mint copies probably will sell for $10.

So what’s going on here? Are people really so desperate to speculate on cards that they’re moving down the food chain to Revised? Is demand for Old School so strong that now even Revised copies are under pressure? Let’s investigate!

There are approximately 289,000 copies of each Revised rare ever printed. That’s the number according to Crystal Keep, and I have no reason to doubt their figures. While this is not nearly enough copies for something like Underground Sea, it certainly should be plenty of copies of Shivan Dragon.

Yet the pricing pressure has really picked up lately. The same goes for other Revised rares too. For example, Sedge Troll has been rising steadily for twelve months now. It was flat-out bulk before 2017, but now the card is approaching a buck and climbing. 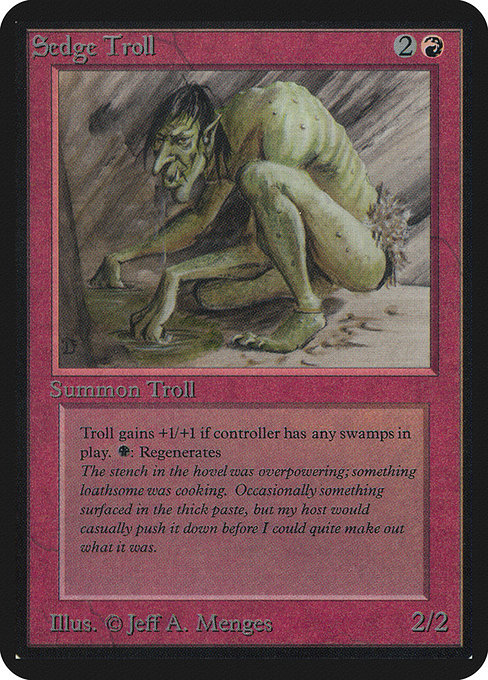 Vesuvan Doppelganger has been even more active on the market, spiking from $3 to $10 just a few months ago. This card doesn’t see much play at all—not in Old School, not in Commander, and certainly not in any sanctioned formats. Yet the Reserved List Revised rare is suddenly quite costly after being $3 for many years.

Other rares are following similar trends: 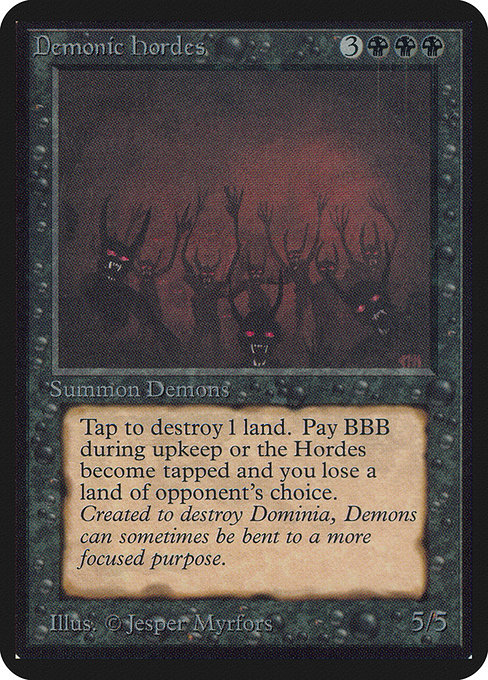 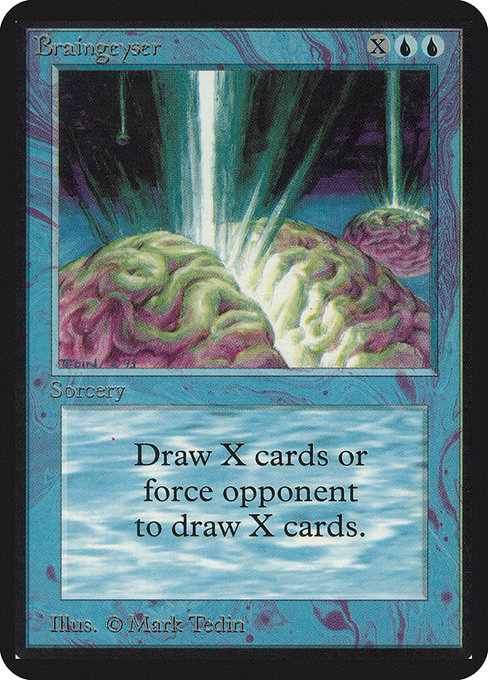 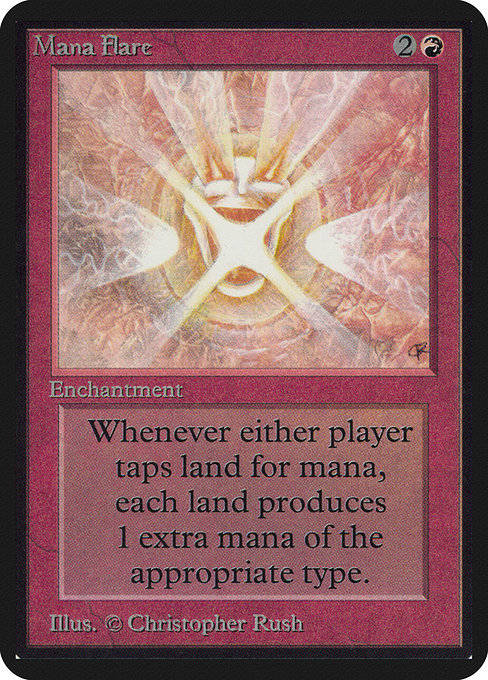 I don’t think I have ever seen marginally playable rares from Revised appreciate so much in price. But the numbers don’t lie. And when a card does see play—such as Mana Flare—it is facing even greater pressure.

While at first impression it seems ludicrous that Revised cards could be rising so definitively in price, I believe demand pressures from a few angles are taking form.

First off, there are the speculators. These are the same people who have been investing aggressively in cards from Magic’s earliest sets. Now that any random rare from Legends has essentially spiked, perhaps Revised is becoming another target. It this really so far-fetched?

There are plenty of Revised cards on the Reserved List that will never see reprint again. The nostalgia of Revised runs quite deep since it reflects a time period when many older players first entered the game. If you are looking for a copy of Shivan Dragon as you remember it, then Revised could be the version that strikes this chord. This may explain some of the recent price momentum on stuff like Shivan Dragon, Demonic Hordes, and Vesuvan Doppelganger.

Then some cards will face additional pressures from Old School demand. There may not be a ton of demand from this pocket of players but there will certainly be some. This especially applies to the most playable stuff like Shivan Dragon and Sedge Troll. While the Swedes don’t allow Revised, most organized tournaments permit the set and there’s certainly no shame in sleeving up Revised cards for kitchen-table Magic. I think this is a legitimate source of pressure, though the numbers are tiny compared to the print runs, so this alone is probably not a driving factor.

A third consideration is the fact that so many Revised cards are heavily played or straight-up lost to the world forever. Revised is when a lot of people got into Magic, and this was during a time of no sleeves. Finding a crisp copy of Revised rares that saw significant play back in 1994 is going to be reasonably difficult despite the large print run.

I also suspect there are shoeboxes of Revised cards worldwide that have been picked through for dual lands and Wheel of Fortunes, but not Sedge Troll and Mana Flare. Stores may not have even bothered listing some of this perceived Revised bulk, making the market’s supply artificially small.

Another very legitimate source of demand comes from the exploding Commander population. A dismal Standard environment has driven many new players into Commander, and some Revised cards are popular in the format. I already mentioned Mana Flare, which shows up in over 2,200 lists on EDH REC. Who doesn’t like bonus mana? Then there’s Mana Vault, which appears in over 20,000 lists! Despite many printings, this card has climbed steadily for the past two years. 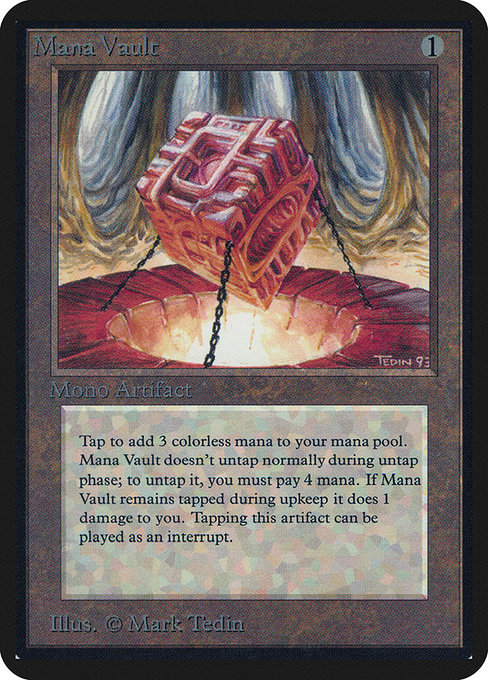 Even Revised Basalt Monolith—neither Reserved  List nor rare—has been rising steadily of late. Judging by the 13,000-plus lists that include this artifact on EDH REC, I suspect the price increase is based strictly on Commander demand.

Knowledge of this trend is important—you’ll know that Revised cards are worth picking and the Reserved List rares are certainly worth keeping aside. But I think there’s enough support for these cards now that speculation is merited. I’ve picked up a few copies of Sedge Troll recently myself, and I will try to pick off one-ofs when placing larger orders in the future. The struggle here is finding copies in nice condition and in quantity. I believe those opportunities are far diminished.

For example, when I search TCGplayer for sellers of at least four copies of Sedge Troll, I find only eight matches. Five of those eight are Moderately or Heavily Played listings, which are uninteresting for investing and speculation. That leaves three sellers of Lightly Played playsets (there are no Near Mint playsets) with prices ranging from $1.19 to $4.82. Paying almost $20 for a playset of Revised Sedge Troll is a tough pill to swallow, so realistically there are only eight copies that can be easily purchased at once from TCGplayer.

There are plenty of one-of and two-of sellers—but then you run into the $2 price limit issue, prohibitively high shipping costs, and the nuisance of ordering from a dozen different vendors.

I thought perhaps large online vendors would have significant supply, making speculation in one purchase a possibility. No luck. Star City Games is completely sold out of Sedge Troll from Revised. Card Kingdom has two Near Mint copies and one EX copy worth buying and that’s it. Great for adding to a cart you’re already assembling, weak if you’re only in the market for the one card.

Other cards that have my eye include Rock Hydra, Granite Gargoyle, Demonic Hordes, Roc of Kher Ridges, and Vesuvan Doppelganger. These are all Reserved List rares with Revised printings that will probably climb higher in price going forward. They may all rise at different rates depending on demand profile, but these will never see a reprint and will only become harder to find in nice condition over time. The more nostalgic, the better.

If the card is playable in Old School, then the Reserved List may not even be a requirement for speculation. That’s how Shivan Dragon became so expensive, and it’s why Near Mint copies of Royal Assassin retail for over $3. The same goes for Savannah Lions despite its infinite reprints. The nostalgia is very strong with these cards and it creates demand at higher pricepoints.

We may already be late to the party on some of these cards. But not all of them have moved yet, and there is plenty of low-hanging fruit out there if you shake the trees enough. Scour your local shops, check your secret stores, and ask around with your local play groups. Revised is disappearing from the market right under our noses and I think there’s more upside ahead for Near Mint, nostalgic, and Reserved List rares.

Some of these may take time to appreciate, but others are already on the cusp of a breakout. To monitor the market efficiently, use TCGplayer’s advanced search feature to filter down to all rares from Revised. You’ll be able to browse the group in order of best selling. In fact, let’s check what’s on the top of the list right now (I have the four-or-more filter turned on):

The top of the list isn’t Wheel of Fortune. It’s not any of the dual lands. The top of the list is nostalgic cards with Old School playability. A little further down you can find some Commander staples, such as Howling Mine. Taiga is the only dual land on the list as of this article’s writing. While those are hot, they aren’t selling as briskly as these nostalgic Revised cards.

If these don’t interest you at all, at least be aware of what is happening right now. Until I saw Shivan Dragon’s spike, I was completely oblivious to this very real trend. Now you are aware of it too, and I encourage you to think of the implications when you make your next TCGplayer purchase. These Revised cards have always been taken for granted, and there used to be tons in stock. But a time may come when they go the way of Unlimited and pricing never drops lower again.